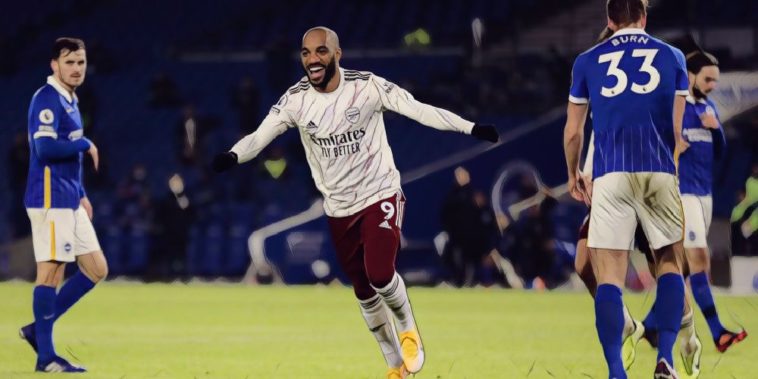 You wait nearly two months for a Premier League win, and then two come along in a matter of days, Arsenal securing a 1-0 win over fellow strugglers, Brighton.

The Gunners earned plenty of plaudits for their impressive performance in their 3-1 Boxing Day win over Chelsea, though they weren’t at their best in the first half on the South Coast.

It was a fairly even opening at the AmEx, but it was Brighton who grew into the game as the first half progressed, though Graham Potter’s side were guilty of missing some highly presentable chances.

Arsenal were much brighter after the break with the visitors creating a number of opportunities in the early stages of the second half, having only managing one in the first 45.

Mikel Arteta introduced Alexandre Lacazette from the bench in the 66th minute, and within 21 seconds of his introduction, the Frenchman opened the scoring. The goal came after an excellent driving run from Bukayo Saka down the right-wing before the youngster squared the ball to Lacazette, who found himself unmarked inside the area, the striker having time to take a touch, pick his spot and fire smartly past Robert Sanchez.

Brighton continued to offer a threat, but ultimately, they were consistently let down by either a poor final ball or wayward finishing as Arsenal held on for their second win in three days.

The result moves Arsenal up to 12th in the table, nine points clear of the drop zone, and speaking afterwards, Mikel Arteta was clearly a happy man.

“We know we’ve been struggling with results,” he told Amazon Prime Sport. “The fact we won against Chelsea was a big boost. To come here and get another win was massively important.

“I’m proud for the boys and happy for the result. [Alexandre] Lacazette is in a good moment. He’s full of confidence. We wanted to change the team in the second half and give it some freshness.

“We weren’t threatening in certain areas. In the second half we looked much more confident and we were playing more forward.

“The best medicine is wins. It’s a different world and a different story. The picture looks much better.”

Asked about his reflections on 2020 as a whole, he admitted that given the pandemic, his first full year in management has been ‘a challenge’.

“Any manager it’s hard enough considering the context – it’s been quite a challenge. I’ve suffered in some moments but I have great people around me.”