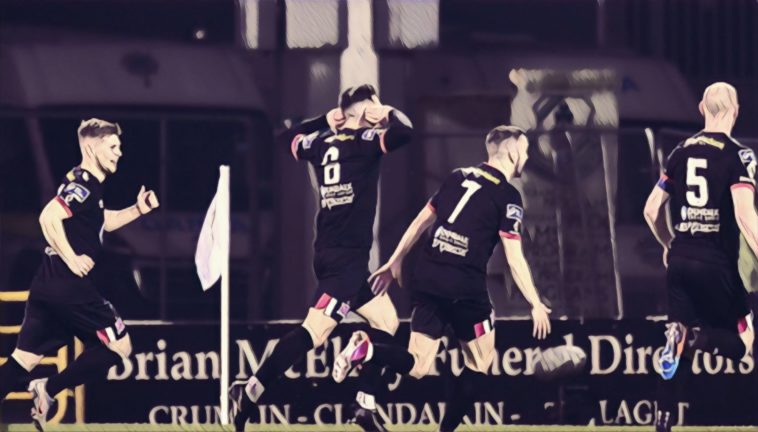 It was the goal seen around the world.

As the corner flew in, driven at real pace, Jordan Flores shaped up to meet it. Most players would try to connect with the ball on their head, maybe get their knee on it or shin it towards goal if they can. But not the Dundalk man, who planted his right leg on the ground, swung his left peg through the air, and made the perfect connection. Thwack, bang, wallop – it flew past Shamrock Rovers goalkeeper Alan Mannus, into the top corner and bounced straight back out.

If Zinedine Zidane and Tony Yeboah had a child together, it would be this goal. Only it somehow feels more impressive than the insane finishes both those players are famous for. Flores’ foot is so high up in the air it’s above his head; if any of us tried that we’d be rushed to hospital for an emergency hip replacement. Mannus got a hand on it but the ball is moving so fast that nothing is stopping it. When it went in live, this writer let out an audible expletive.

It’s one of those goals that causes involuntary reactions in everyone who witnesses – except, for whatever reason, Dundalk manager Vinny Perth, who remained ultra calm and collected while everyone around him lost their collective minds at what they had just seen. His non-reaction in some ways reflects the madness of the situation – how do you sum up a moment like that?

Moments after the goal had been uploaded to Twitter by RTE, it exploded into an internet sensation, becoming the most viral goal in Irish football since Stephanie Roche scored a mind-blowing volley of her own in 2014. The commotion spread beyond Irish shores and to the UK and beyond. Former Liverpool midfielder Dietmar Hamann called it the “goal of the century, best I’ve ever seen”, Peter Crouch said it was the goal of the season, FIFA themselves have touted it for the Puskas Award, and numerous media outlets around the globe, such as AS, RT and Goal, reported on it.

This was a much needed advertisement for the League of Ireland and the FAI, which has attracted a lot of stick for the usual poor planning and fecklessness that besets it every season. So far we have already had to endure: the Shamrock Rovers II debacle, the fixture pile-up starting up nice and early, and the decision to move the Dublin Derby between Rovers and Bohemians a day later after the police recommended doing so in order to lessen the chance of crowd violence, only for RTE to be unable to broadcast the match due to Storm Dennis – and both fans from both clubs were embroiled in a fracas on the streets afterwards anyway.

This enthralling contest distracted us, at least briefly, from the various ills of the league to display the potential for club football in this country. Aside from the Flores’ wonder goal, this was an exciting, back-and-forth encounter between the two best teams in the Premier Division. The home side won 3-2 thanks to a lovely goal from Jack Byrne, who put on another one of his typical silky displays in midfielder. These are all details that will get lost in history, of course, just like everyone forgot how Carlton Palmer scored the greatest goal of his career against Wimbledon – only for Yeboah to score that goal.

Shamrock Rovers 3-2 Dundalk – Jack Byrne curls a sublime effort home from the edge of the box to put Rovers in front #rtesoccer pic.twitter.com/j6MzI0fOWF

The powers that be could not have asked for a better advert for the league on national television – and in front of some marquee names in attendance at Tallaght Stadium. National team manager Mick McCarthy and his assistant Terry Connor took it all in, as did the Ireland U21 manager Stephen Kenny, and President Michael D. Higgins.

Of course, it will only act as a distraction; the reality of the League of Ireland is that the majority of matches will get nowhere near the quality on show here and some will be played on far inferior surfaces. But for one night the #GreatestLeagueInTheWorld was at the centre of football universe, which is more than anyone associated with the game on this island could ask for.

Ironically, amid all of the adulation and attention the goal got, the video RTE published online was flawed, freezing just as the corner was taken. The original video has four and a half million views at the time of writing, while the subsequent clean version has 135,000 views.

As for Flores, he has a knack of pulling out top drawer finishes. Before Friday night, his last activity on Twitter was to retweet a video of his spectacular goal against Cork City, dubbed an “early contender for goal of the season.” It took only three days for that tweet to age badly, but he won’t mind. Neither will we.

Read: The best League of Ireland kits for the 2020 season

See Also: Tino Asprilla could win a game on his own – if he felt like it