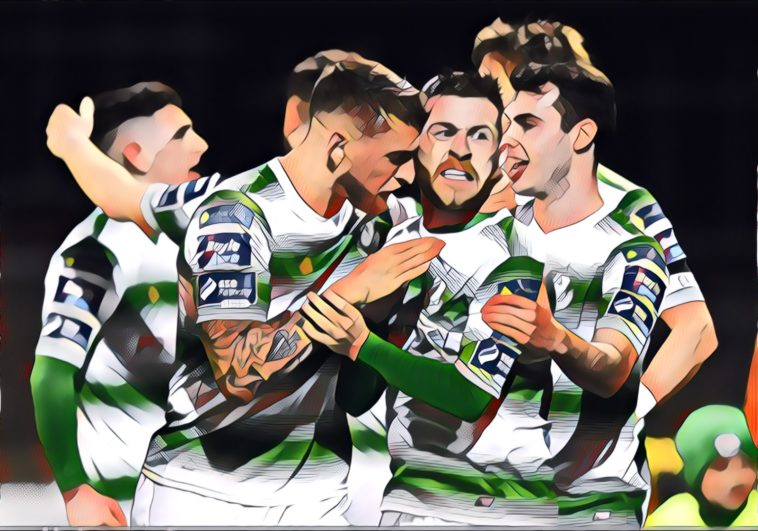 Three observations from the League of Ireland in Gameweek 27, including Jack Byrne’s stellar form in Europe, why he should make the Ireland team, Dundalk’s composure on the big stage, and Waterford flirting with danger.

Despite enduring a nightmare start on Thursday, conceding a screamer in the opening five minutes to Apollon Limassol, Shamrock Rover had a night to remember in their Europa League qualifier.

Lee Grace cancelled out the Cypriot’s goal within ten minutes, before Roberto Lopes scored on the hour mark to give the Tallaght outfit a huge first leg victory.

The man of the hour though, as ever, was Jack Byrne. Previously in this column I had called the former Manchester City midfielder arguably the best talent in the league but criticised him for his inability to control games, for not taking them by the scruff of the neck when he so clearly could if he wanted to.

The Dubliner has been on fire in recent weeks though, having a hand in each of the six goals Rovers have scored in Europe, guiding them to two wins and a draw along the way.

If I were to make a three-man shortlist for Player of the Year, I’d probably pick Sean Gannon, Michael Duffy and, as the frontrunner, Jack Byrne.

Given his incredible form in European competition, there must be a place for him in Mick McCarthy’s Ireland squad? We don’t have too many players who slalom between defenders with such ease the way he does, as well as knit together attacking phases of play.

In fact, do we have anyone like that at international level right now?

Dundalk show they have the composure for this level

If Dundalk rolled over and took a beating from Qarabag this past week, there would have been little criticism. They were up against a team who have reached the Europa League group stages in four of the last five years, and reached the Champions League groups in the other. This is another step up, one that could prove too far for the Lilywhites.

And so it seemed when, inside four minutes, Mahir Madatov put the Azerbaijani outfit in front from a corner. It was sloppy defending and a foreboding start.

But the Louth side kept their composure when so many other teams in their position would have capitulated, stopping their opponents from building on that lead. Qarabag should really have added more before the interval, but the home team stubbornly kept themselves in the tie.

Then, with twelve minutes to go, they got a vital score through Pat Hoban, who got the Champions League goal he has been craving, and the team’s first in Europe for five matches.

There it is! Goal for Dundalk, Pat Hoban eventually heads the ball over the line from a corner kick. The sides are now level at 1-1.

The visitors might well have come away the happier, seeing as they only need a scoreless draw to advance to the next round, but the result gives Vinny Perth’s men genuine hope of taking a huge scalp next week.

The pressure is on for Dundalk, though. With American consortium Peak6 — who were previously involved with Premier League side Bournemouth — in charge of the club, European progression is non-negotiable.

But these are the nights this team and their town live for.

Before Friday night’s clash with relegation battlers UCD, Waterford had not felt the sweet taste of victory since the second last week of May — against UCD, of all teams.

That two month stretch without a win paints a picture of a club in freefall, a club that have been sent off the rails ever since they lost their Europa League place due to an administrative technicality.

In that time, star midfielder Bastien Hery was transferred to Linfield, while former Crystal Palace centre-back Damien Delaney retired. For eight weeks, this team has been on a road to nowhere, culminating in a 1-0 defeat to bottom side Finn Harps.

Another loss this week would have narrowed the gap between the Blues and the bottom two to just four points. Fortunately for them, they beat the Students — just.

Heading into the last few moments of the game, the score was one apiece, but they snatched a winner through Dean Walsh’s stunner. The relief was palpable.

Being able to once again count on Zach Elbouzedi, who scored the opener in the seventh minute, helped, but Waterford should bat away any thoughts that they are out of the woods just yet. If they were to continue on the formline of the past couple of months, which is just one point per game, they would surely find themselves in a relegation dogfight, especially since Harps have put together some big wins of late.

It could prove to be a long run-in to the season for the Munster side.