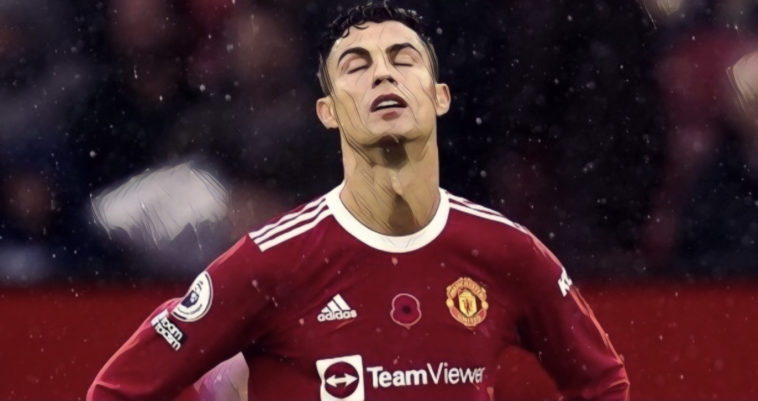 Man United’s hopes of finishing in the top four took a massive hit today after they drew 0-0 at home against relegation threatened Watford.

The home side looked odds on to take the lead after just a few minutes, but Cristiano Ronaldo continued his recent struggles in front of goal by firing against the post from six yards out.

Alarmingly for Manchester United and the Old Trafford crowd that theme would continue for the rest of the opening period, with the Red Devils continually cutting Watford open but consistently missing clear-cut chance after clear-cut chance.

Talisman Bruno Fernandes led the guilty party, the Portuguese international firing straight at Ben Foster when clean through before he headed wide from close range with the goal at his mercy.

During the second-half nothing much changed with the game resembling a training exercise of attack v defense. Ronaldo continued to do everything but score and Anthony Elanga inadvertently clearing a scuffed shot from the Portuguese superstar off the Watford line pretty much summed up United’s luck in front of goal.

United continued to huff and puff right up until the final whistle, although Foster in the Hornet’s goal was rarely tested and Roy Hodgson’s men held on for a vital point in their quest to beat the drop.

38 – Ben Foster (38y 329d) becomes the oldest visiting goalkeeper to keep a clean sheet against Manchester United at Old Trafford in the Premier League. Indeed, the previous oldest visiting keeper to achieve this feat was David Seaman (38y 231d) for Arsenal in May 2002. Shutout. pic.twitter.com/fm5wGzfVZP

Man United remain in fourth after today’s game, however Arsenal sit two points behind them with three games in hand and the Red Devil’s facing away trips to the Etihad and Anfield in their next two games.

Speaking afterward United boss Rangnick admitted it had been a massively frustrating afternoon afternoon for him and his side.

“We did everything apart from score,” Rangnick told BBC’s MOTD. ”It’s hard to take that result. In the end, if you miss that many chances it is difficult to win the game. We were in full control for almost the whole game, we didn’t allow them hardly any counter attacks.

“We need to be sharper in front of goal, you can hardly create more chances than we did today. In the end it is a very frustrating afternoon.

“Had anyone told me that we would create that many clear chances I would have said ‘yes, that is enough for us to score one of two goals at least’. But we didn’t.”

Bench Ronaldo and play Cavani; if Cavani is still not fit, I would play Pogba as a No 9. Sounds daft but think about his strengths.
I am now going to lie down in a dark room…