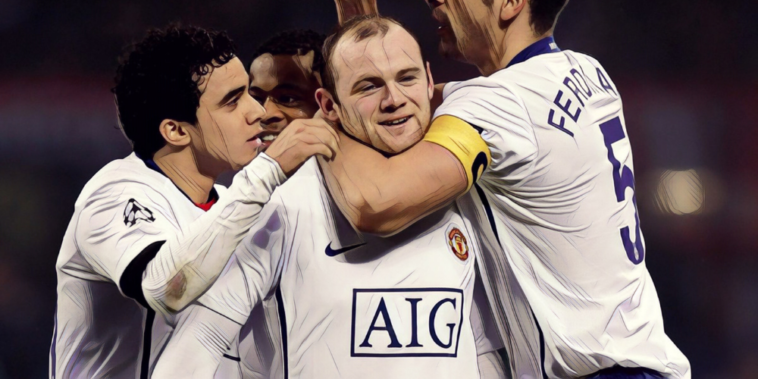 Wayne Rooney’s career proved a tale few in English football are ever likely to forget. He was the precociously gifted wonderkid who burst onto the scene as a teenager, before establishing himself as one of the greatest players of the Premier League era.

Rooney was so talented, so versatile that he was a number of things. Both a goalscorer and creator, he changed stylistically throughout the course of his career. From the bulldozing, buzzing man-child of his early emergence, to both a penalty-box poacher and creative catalyst at Manchester United.

Rooney signed for the Red Devils amid much fanfare during the summer of 2004, the most exciting talent on the continent following his stunning performances for England at that summer’s European Championship in Portugal.

Ready-made to make an impact upon his arrival, he announced himself as a superstar-in-waiting with a Champions League hat-trick on his debut against Fenerbahce, before providing the potency for Sir Alex Ferguson’s final great side at Old Trafford.

Their performances saw the Red Devils dominate English football, winning three consecutive league titles between 2007 and 2009, the second of which came alongside Champions League success in Moscow.

Rooney was arguably the more promising of the pair during their initial seasons, but Ronaldo’s relentless drive saw him accelerate away to become the world’s best footballer, coronated with the 2008 Ballon d’Or before a record-breaking move to Real Madrid the following summer.

His departure left a sizeable void, but one Rooney would fill as he shouldered the added responsibility to enjoy the finest football of his own career.

In 2009/10 the forward was almost unstoppable, including a crowning night in the San Siro.

Ferguson’s side had reached each of the previous two Champions League finals, but the exits of Ronaldo and Carlos Tevez had weakened their attacking arsenal.

Drawn to face AC Milan in the first knockout round, it was a fixture between two of European football’s royalty with the Italians boasting stellar – if ageing – names including Andrea Pirlo, Ronaldinho and former United favourite David Beckham amongst their starting side.

The two teams had met in the semi-finals three seasons earlier, with Milan progressing to the final following a second-leg fightback, after Rooney’s late winner had decided a thrilling first meeting.

United had never beaten Milan in four previous away meetings in the European Cup – indeed, they had not even scored – and that run looked set to continue at the San Siro as the Serie A side dominated the opening exchanges.

It took less than three minutes for the Rossoneri to open the scoring, Beckham’s free-kick from the right only half-cleared, with the loose ball falling at the mesmeric feet of Ronaldinho.

United were rocked and Milan rampant, Ronaldinho showing flashes of his Barcelona brilliance as the Italians piled on the early pressure without finding a decisive second.

Jonny Evans and Rio Ferdinand struggled to live with the movement of the Milan forward line, with Klaas-Jan Huntelaar firing a warning effort wide after spinning away from a defensive challenge.

The visitors had rode their luck, before being handed a slice of gargantuan fortune.

Paul Scholes miscued his initial volley from Darren Fletcher’s delivery from the right, only to see the ball cannon off his standing leg and find its way beyond Dida to level the scores.

Rooney had spent the first half isolated in his role as a lone forward, trudging off at half-time well aware his side were fortunate to still be in the contest.

It was a position that Rooney had reluctantly taken for the club despite his goalscoring success, though it was not one he particularly enjoyed with his natural instinct to drop deep and chase lost causes away from the area.

He had scored seven goals in his past eight appearances in all competitions, but none in three Champions League fixtures with Milan’s first-half dominance only adding to those frustrations.

In the second half, however, he proved to be the match-winner.

Rooney pulled apart Milan’s defensive lines with his verve and vibrancy, dropping ever deeper to find possession before hurtling towards the host’s backline with bullish intent.

After two sights on goal his moment finally arrived, rising high to meet Antonio Valencia’s cross and postage-stamp his header into the far corner.

Valencia had burst beyond the veteran and slowing legs of Giuseppe Favalli to hoist over a high ball for Rooney to attack, the forward climbing above Daniele Bonera to net a priceless San Siro second.

Momentum shifted, the Premier League champions upped the pressure with Rooney dragging a snap-shot narrowly wide as the Milan defenders failed to get to grips with the United number ten.

Their inability to contain the forward proved costly just eight minutes after the forward’s first, as Rooney put the Red Devils in total control.

Fletcher was afforded too much room inside the left channel, with the Scotland midfielder floating an arcing cross into the penalty area.

Rooney – on the move between the static defending of Thiago Silva and Alessandro Nesta – met the ball emphatically to power his header beyond the motionless and despairing Dida.

United had weathered an early San Siro storm to put themselves in a commanding position in the tie, with Rooney’s ruthlessness the difference between the Red Devils and an ageing AC side.

Clarence Seedorf’s fine late goal provided Milan with hope of a second-leg fightback, but the damage had been done as Rooney’s clinical double handed his side the advantage.

Had the Scouse striker been adorning AC colours, it is not inconceivable to think the result would have been entirely different.

Ferguson was gushing in his praise for the player following his magic in Milan, hailing Rooney as a footballer capable of reaching the very pinnacle of the sport.

“He’s been in devastating form and they just couldn’t handle him in the second half,” Ferguson said post-match.

“I thought he was marvellous. Particularly in the last two months we have seen development in his game and confidence has a lot to do with that.

“His basic ability is as good as any of those [elite] players, what he’s got to do is improve his goalscoring – which he’s now doing and if he continues that trend then he’s got to be regarded alongside any player.”

Rooney was sublime once more in the return as a devastating performance saw United thrash Milan 4-0 at Old Trafford, scoring twice to make it four goals across an unforgettable last-16 encounter.

He finished the season with 34 goals in all competitions to be named as the PFA Player of the Year, following a season in which Rooney shone as English football’s most captivating talent.

He had been the complete player, one capable of manufacturing goalscoring chances and dispatching them with outstanding ease.

Against Milan he singlehandedly turned a poor performance into a historic win on the road, the individual inspiration behind his side’s Italian job.

Rooney’s performances reached a new level during the 2009/10 campaign, but perhaps none were better than his centre-forward clinic at the San Siro.