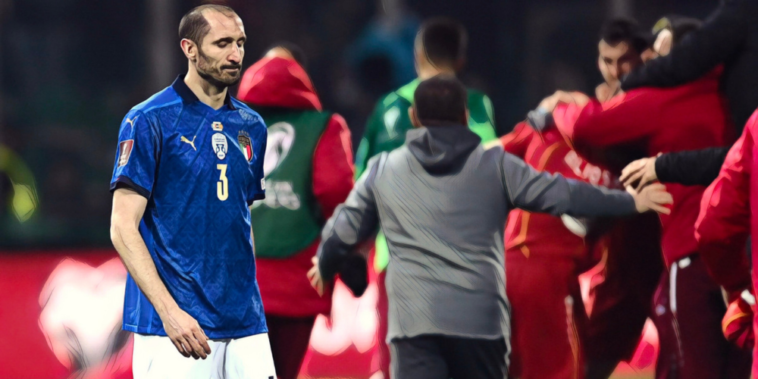 Italy will be a major absentee from the 2022 World Cup in Qatar after the Azzurri’s shock loss to North Macedonia in the tournament’s play-offs.

Roberto Mancini’s side were on a huge high after winning the delayed European Championship last summer, but less than a year later have suffered a massive low after a stunning upset in World Cup qualification.

Italy failed to qualify for the World Cup for the first time since 1958 in 2018, but will now miss a second successive finals after Aleksandar Trajkovski scored a stoppage-time winner for North Macedonia in March’s play-off.

We look at what exactly went wrong for Italy.

Italy’s problems pre-dated the North Macedonia loss, as the Azzurri failed to fire in qualification to finish as runners-up to Switzerland.

Mancini’s side had compiled a record-breaking 37 games unbeaten under the former Manchester City manager, a run which included their triumphant Euro 2020 campaign and ended with defeat to Spain in UEFA Nations League semi-finals in October.

The warning signs had already emerged after successive draws with Bulgaria and Switzerland in WCQ, however, before another pair of stalemates to the Swiss and Northern Ireland saw the Italians finish two points behind the Switzerland and condemned them to the play-offs.

Chelsea midfielder Jorginho shouldered the responsibility for the nation’s failure, having missed penalties in both of the draws with group winners Switzerland.

Had either been converted, Italy would have been assured of their place in Qatar and the 30-year-old admits his errors from the spot will ‘haunt’ him.

“It hurts when I think about it, because I do still think about it and it will haunt me for the rest of my life,” he told RAI Sport.

Was there a sense of overconfidence from Italy?

Facing a team that had never previously qualified for a World Cup in the play-offs appeared a straightforward task, but the Azzurri crashed to a late defeat in Palermo.

North Macedonia had caused an upset with a win over group winners Germany in qualification and sprang another surprise in Italy despite being second best for much of the contest.

The European champions were without experienced centre-back Leonardo Bonucci for the clash, but were barely troubled before Trajkovski’s stoppage-time winner against the run of play.

Italy had a huge 32 shots on goal but their profligacy came back to bite, as Domenico Berardi and Ciro Immobile wasted the home side’s best chances when well placed.

Just five of the home side’s shots were on target, despite a dominant display that included 66% of the possession and 16 corners.

Berardi was involved in several sights of goal, missing the clearest chance after being gifted possession by a misplaced pass from North Macedonia goalkeeper Stole Dimitrievski. With the goal gaping, his tame shot allowed Dimitrievski enough time to recover and deny the hosts.

As four times World Cup winners Italy usually go into major tournaments among the favorites so their absence will have a massive impact on fans of sports betting ahead of kick-off in Qatar.

Italy’s failure to reach the World Cup is also the first time the European champions have failed to qualify for the finals since Greece in 2006. On just four occasions have the reigning European champions failed to qualify for the World Cup, but given two of those – Denmark (1992) and Greece (2004) – were shock winners of the Euros, the failure of the Azzurri is perhaps the biggest absentee in recent memory.

Italy were ranked as joint-fourth favourites (9-1) to win the World Cup last summer and as the sixth-ranked nation by FIFA at present. Their absence has allowed Portugal – eventual conquerors of North Macedonia in the play-offs – to become top seeds.

The Portuguese (12-1 to lift the trophy in Qatar) have since been paired with Ghana, Uruguay and South Korea in a rather more straightforward looking group.

Whilst the European champions will be absent from the tournament, there will be several champions of other federations taking part in Qatar. Argentina won the Copa America last summer and are 9/1 odds to follow that with World Cup success, in what could be Lionel Messi’s last appearance on this stage.

Senegal – winners of the Africa Cup of Nations in 2022 – are 80/1 to become Africa’s first world champions, whilst CONCAF Gold Cup winners the USA are 100/1.

Belgium(12/1) are the shortest odds of sides without a previous World Cup triumph, whilst Croatia – runners-up in 2018 – are a more distant 50/1 selection to go all the way.