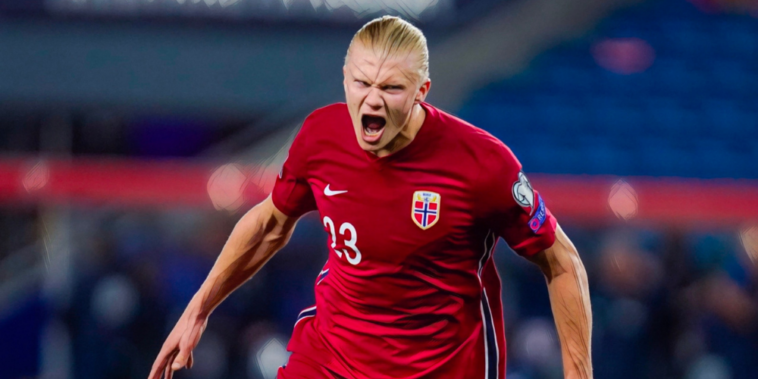 The World Cup line-up is (almost) finalised as world football’s biggest global event prepares to return in Qatar later this year, a festival of football heading towards the Middle East in the winter months.

Some of the game’s greatest talents will be looking to etch their names into history by lifting the sport’s most prestigious trophy, but there is a number of notable names who will be absent in Qatar.

Following failed qualification campaigns, we’ve compiled a best XI of players who will be missing at the 2022 World Cup.

Jan Oblak could become one of the greatest goalkeepers never to feature in a major tournament, with the Atletico Madrid shot-stopper still awaiting his first chance on the international stage.

Slovenia have qualified for just three tournaments since gaining independence and none since the 2010 World Cup in South Africa, a tournament which came two years before the international debut of their current captain.

Named as La Liga’s Player of the Season in 2020/21 after Atletico Madrid’s title success, he has been a crucial figure in the success of the capital club in recent campaigns and has been named as Slovenian Footballer of the Year in six of the past seven years.

The Czech Republic reached the quarter-finals of Euro 2020 last summer, but will watch on as the World Cup unfolds after losing to Sweden in the play-offs.

The absence of Patrik Schick contributed to their defeat to the Swedes and means Vladimir Coufal will be among the Czech names absent from Qatar.

Coufal has been an impressive performer in a West Ham side that have exceeded all expectations under David Moyes and will hope to bounce back from his disappointment with a strong end to the season, as the Hammers chase Europa League success and Champions League qualification.

Is Italy’s failure to qualify the end for their miserly centre-back partnership?

Leonardo Bonucci and Georgio Chiellini have been the bedrock of the Azzurri across the past decade, with the experienced defensive duo crucial to the Italian’s success at Euro 2020.

The 34-year-old missed the play-off defeat to North Macedonia and made his displeasure at the qualification system known post-match, venting his frustration after Italy became the first European champions since Greece in 2006 to miss the World Cup.

Georgio Chiellini will be 41 when the next World Cup rolls around, with the veteran centre-back having hinted at retirement following Italy’s failure to reach Qatar.

He earned his 116th cap – level with Andrea Pirlo – in the defeat to North Macedonia and it could be his final appearance for the national side after Italy failed to secure qualification to successive World Cups for the first time in their history.

Austria were handed a second chance at World Cup qualification through their Nations League performance after finishing fourth in Group F, but saw the brilliance of Gareth Bale end their hopes in the play-offs.

Austria have not qualified for the World Cup since 1998 and their failure this time around extends the wait of David Alaba for an appearance at the finals, with the defender regarded as one of European football’s best.

Alaba won ten league titles at Bayern Munich before signing for Real Madrid last summer and the eight-time Austrian Player of the Year has become an integral figure at the Bernabeu this season.

Jorginho had more regrets than most following Italy’s shock 1-0 loss to North Macedonia, with the Chelsea midfielder quick to blame himself for the Azzurri’s absence this winter.

The 29-year-old missed crucial spot-kicks in both of Italy’s draws against Switzerland in the group stage, as the Italians finished as runners-up to the Swiss. Had either effort been converted, Italy would have qualified automatically for the World Cup as group winners.

“It hurts when I think about it, because I do still think about it and it will haunt me for the rest of my life,” the Chelsea midfielder told RAI Sport.

“It’s just so difficult to explain. It was a nightmare.”

That was how Marco Verratti described Italy’s play-off defeat to RAI Sport, a result which stunned Europe and left the Azzurri embarrassingly eliminated.

Verratti was 21-years-old when Italy travelled to Brazil for the 2014 World Cup, but will be 33 when the next finals arrive in Canada, the United States and Mexico in 2026.

Having been one of European football’s best midfielders in recent seasons, his peak years have been spent watching the World Cup from home.

After a dreadful defence of their Africa Cup of Nations title in 2022, the bad news continued for Algeria following their failure to qualify for a second successive World Cup.

Ahmed Touba’s 118th-minute goal looked to have secured their place in Qatar, only for Karl Toko Ekambi to score a dramatic 124th-minute goal to send Cameroon through.

Mahrez has scored a career-best 22 goals in all competitions for the Premier League champions and will be 35 when the World Cup next comes around.

Luis Diaz has made an immediate impact since signing for Liverpool in the January transfer window, becoming an instant favourite for his fleet-footed skills and phenomenal work-rate.

Diaz starred at last summer’s Copa America to finish as the joint-leading scorer alongside Lionel Messi, but will not take part at the World Cup in 2022.

Luis Diaz is something special 🤯pic.twitter.com/LJb6uJJILU

Colombia could only manage a sixth-place finish in South America’s notoriously difficult qualification process, missing out on a play-off spot to Peru.

Egypt missed out on a place at the World Cup in Qatar later this year after losing a penalty shootout to Senegal on Tuesday.

Mohamed Salah missed from the spot to condemn Egypt to defeat, with The Pharoahs having also lost to Senegal in a shootout during the AFCON final earlier this year.

I mean, just look at this. Salah sails his penalty over… and surely anybody would, given the lasers.

Mane scores, Senegal wins the shootout, Egypt out of the World Cup pic.twitter.com/tgHmCmW8uu

On both occasions it was Sadio Mane who converted the winning kick, condemning his club teammate to the sidelines when the World Cup action unfolds this winter.

Having enjoyed a brilliant individual season to lead the Premier League for goals, Salah will hope to finish the club season with silverware after the misfortunes of his recent international exploits.

Norway missed out on qualification for the World Cup despite boasting one of world football’s most exciting talents, with the goals of Erling Haaland not enough to secure the Norwegians their place at the finals for the first time since 1998.

Haaland has scored a stunning 80 goals in 82 appearances since signing for Borussia Dortmund and broken a whole host of goalscoring records, whilst the 21-year-old has carried that form onto the international stage with 15 goals from 17 caps.

His presence, alongside an improving side that also includes Martin Odegaard, has raised optimism that Norway can reach a major tournament for the first time in more than two decades in the near future.