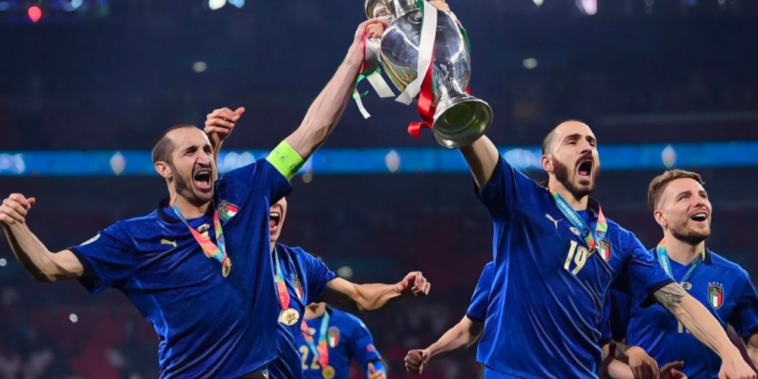 Catenaccio has long been associated with Italian football. Translating as ‘door-bolt’, it is a tactical approach in which defence ranks above all else, the primary focus revolving around the limiting of opposition sides to minimal chances.

Catenaccio in its original form is no longer commonplace in Italian football. It is a system that had been exposed as modern trends changed, but one whose roots can still be found in centre-backs from Southern Europe.

The hallmarks of a fabled footballing system – defensive grit, unrelenting resilience and immaculate organisation – are still championed in Italy with the Azzurri continuing to produce elite defenders.

Leonardo Bonucci and Giorgio Chiellini have followed in a long lineage of iconic centre-backs, a brutish defensive duo that have carried the baton for more than a decade.

Whilst the likes of Alessandro Nesta and Paulo Maldini brought a more cultured focus to defending in the early parts of the millennium, Bonucci and Chiellini have since represented somewhat of a throwback.

The two have been almost inseparable for over a decade, forming the axis of successful sides for club and country.

Their unison at club level came at Juventus. Chiellini was first to emerge at second-tier Livorno, where his breakthrough turned heads in Turin and led to a move to Serie A’s most successful side.

Initially beginning in a more advanced position before finding his home in the backline, a loan spell at Fiorentina in 2004/05 accelerated his development.

Introduced into the Juventus team the following season, he won the Scudetto during that first season as a regular, though saw his maiden medal revoked as a result of the club’s involvement in the Calciopoli scandal.

Chiellini remained despite relegation and a mass exodus and helped Juventus back to the top tier at the first attempt, a season which saw him first switch from full-back to centre-back – the role in which he would perform with such distinction across the coming decade.

Bonucci’s arrival came as the noughties turned in the 2010s. Having failed to make the grade at Inter Milan, he bounced around a succession of clubs before Juventus took a chance on his services after an impressive season at Bari.

The following summer saw Antonio Conte arrive as manager, a transformative appointment for Chiellini, Bonucci, and an Old Lady struggling to regain her place at the summit of Serie A.

The former Bianconeri captain changed the side’s system to a 3-5-2 formation, with Andrea Barzagli – one of football’s great late bloomers and an often overlooked presence in Juventus’ decade of dominance – forming a three-man backline of consistency and class.

Conte’s first season saw Juventus end their nine-year wait for the Scudetto and in sensational fashion, ending the campaign unbeaten with a record of 23 wins, 15 draws, and zero losses.

It was a win that started an era of unprecedented dominance for the Turin side. In each of the following eight seasons the Scudetto was won by Juventus, as the Bianconeri broke records and heightened their status as Serie A’s most formidable force.

Chiellini’s centre-back collaboration with Bonucci was the bedrock of the club’s championship-winning era, a defensive axis that led to 12 major domestic honours and Champions League final appearances in 2015 and 2017.

Bonucci briefly departed to spend a single season with AC Milan in 2017/18, an ill-fated move that saw the defender soon realise the error of his decision and just 337 days later return to Juventus.

Their reunion continued a partnership that had become almost telepathic. Boasting complimentary attributes and a knowledge of one another’s strengths and weaknesses right down to the finer detail, it is a familiarity which has helped Chiellini and Bonucci thrive in tandem.

Chiellini’s defending has often been in its purest unadulterated form. He has revelled in late lunges, brave blocks and a smattering of the necessary evils required to complete his objective.

Bonucci’s game is modelled more on the finer aspects of centre-back play. Crude challenges are a rarity for a defender whose timing and anticipation allow him to intercept danger, whilst a fine passing range has made the Italian one of the best defenders in Europe for turning defence into attack.

Legend assured at club level, it perhaps takes major tournament success for Italian defenders to join the immortal ranks of the nation’s genuine greats. Euro 2020 proved the occasion in which the Chiellini-Bonucci partnership cemented its legacy.

Italy’s failure to qualify for the 2018 World Cup could have prompted mass change, but Roberto Mancini chose to keep the old-guard in tact when it came to building his side from the back.

Mancini’s turnaround of the Azzurri was extraordinary ahead of the European Championship, though even the most optimistic of Italians would not have envisaged their summer to savour.

Italy’s run of momentum had began in qualifying and lasted all summer long, the Azzurri appearing almost invincible after reaching 34 games unbeaten with a final win over England at Wembley.

At the centre of their success had been two familiar faces, with Chiellini having reversed a retirement decision to captain Italy at the finals.

Chiellini and Bonucci represented two Roman generals, protecting the Azzurri goal as if it were the keys to Rome itself. It could be easy to picture the two stood either side of an Emperor, steely-eyed and cloaked with daggers in close proximity, allowing nothing past in protection of their mutual cause.

Bonucci, the more front-footed footballer and often easier on the eye, and Chiellini a wily master of the dark arts of defending.

Italy’s curtain-raising win over Turkey provided a microcosm of Chiellini’s desperation to defend, when the veteran centre-back greeted a late slide on Burak Yilmaz with a raucous fist pump and high-fives to teammates within reach.

Perhaps not unusual in isolation, but with Italy 3-0 up and cruising in the second minute of stoppage time, it was a clear representation of the centre-back’s unapologetic love of defending.

Alvaro Morata had once likened training against Chiellini at Juventus to trying to steal food from a gorilla’s cage, such was the daunting prospect of out-battling the defender.

With Bonucci alongside him, it was an even greater task.

Italy conceded just three goals on route to the final and it was Bonucci who came to the fore against the host nation, bundling in an equaliser after Luke Shaw had opened the scoring early on.

Penalties saw the Azzurri triumph and Chiellini and Bonucci – featuring in their 326th game together for club and country – had a major international tournament triumph to add to a multitude of domestic honours.

Despite a combined age of 70 the two had frustrated and thwarted forwards, utilising all their experience to lead Italy to a first European Championship since 1968.

The images of the duo hoisting aloft the European Championship together will last the test of time, even if time itself will eventually catch up with two centre-backs who have defied it in recent seasons.

Brilliant individually and even better in unison, Chiellini and Bonucci have been one of the great defensive duos of the modern era. Fitting torchbearers for Italy’s proud heritage and examples that defending is indeed an art form.