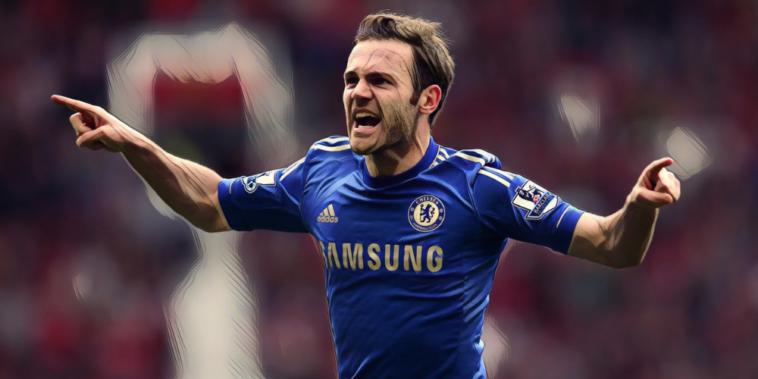 Juan Mata might just be the most likeable man in modern football. The ever-charming Spaniard with a cultured left foot and pleasant personality has almost transcended the tribalism that dominates the sport.

Recent seasons have seen Mata fall from the consciousness of football fans, a bit-part role at Manchester United restricting supporters to mere glimpses of a talent who once astonished at his Premier League peak.

The finest football of Mata’s career came before his move to Manchester, as a fresh-faced footballer with magic in his boots waltzed into the capital and began to cast spells over Stamford Bridge.

Chelsea’s capture of Mata was one that caused excitement amongst the fanbase, signing the Spanish schemer from Valencia in 2011, a summer after the midfielder had formed part of La Roja’s victorious squad at the World Cup in South Africa.

Mata was part of an armada of artistic talents honed in Spain, who helped define an era and transformed perceptions, a collective of creative footballers who demonstrated that technique trumped all even in the modern game.

Doubts over whether the Spaniard’s stature could handle the rigours of English football were rapidly removed following an excellent debut season, with Mata named as Chelsea’s Player of the Season after helping the west Londoners to an unlikely FA Cup and Champions League double.

It was Mata’s in-swinging delivery that was powered home by Didier Drogba to level the latter final, as the Blues became the capital’s first champions of Europe after beating Bayern Munich in the showpiece.

Mata’s gifted technique and ability to unlock defences with passes of varied weight, angles and range saw him provide 13 league assists during that maiden campaign, but he hit new heights the following season in an individual campaign often lost amongst the finest the Premier League has witnessed.

He returned from a summer that had seen Spain conquer Euro 2012 to win a third consecutive major tournament, with Mata coming off the bench in the final to score in the 4-0 win over Italy.

His first three games of the league campaign passed with little incident, but after providing the assist for Ashley Cole to score the winner against Stoke in September, his season exploded.

The following fixture saw Mata prove the match-winner as Chelsea won at previously unbeaten Arsenal, creating one and scoring another in a 2-1 win at the Emirates.

Fernando Torres opened the scoring after steering in Mata’s curling free-kick, before another set-piece situation saw the latter bend home a vital winner, after Gervinho had levelled for the Gunners.

Mata’s ability to decide the biggest games became apparent throughout the course of the campaign, as the midfield magician posted extraordinary numbers from his role as Chelsea’s creative catalyst.

He scored 19 goals across all competitions for the west Londoners and provided a staggering 35 assists, with no player across Europe creating more goals than the Spanish superstar.

Two of those assists came following a Mata masterclass in another London derby win for Roberto Di Matteo’s side, as Chelsea came from behind to win a thriller at White Hart Lane.

Mata drew the sides level after Gary Cahill’s thumping opener for Chelsea had been cancelled out by William Gallas and Jermain Defoe, before firing the visitors into the lead after ghosting in behind.

He completed the comeback late on after turning provider for Daniel Sturridge, robbing Kyle Walker of possession before gifting Sturridge the simplest of tasks to turn home from close range.

It was a sweet moment for Mata, who had earlier found himself on the receiving end of a robust – and needless – Walker challenge, as the right-back grew frustrated in his task of taming the Spanish schemer.

#OnThisDay in 2012, a Juan Mata masterclass helped Chelsea to a 4-2 win at White Hart Lane 🔵 pic.twitter.com/HKXZFi2RLH

Chelsea’s success in the previous season’s Champions League had come as a shock, with the Blues in the midst of a transitional phase, having stumbled upon the appointment of Di Matteo following the failed tenure of André Villas-Boas.

Whilst the latter’s reign ultimately proved forgettable and brief, his signing of Mata provided Chelsea with the spark a transitional side needed to navigate a muddling period.

Mata at times was unplayable, escaping the attentions of his markers with clever movement into space, receiving possession on the half-turn and looking immediately to set his side on the front foot.

The recurring image became of Mata – freed in space behind opposition midfields – finding passes of perfect precision over defensive lines, the technique and trajectory akin to a golfer landing flush on the green.

Amongst his best came as Chelsea edged Manchester United in an FA Cup quarter-final replay, a tense tie decided by a moment of magic from Mata, met with a brilliant finish from the grateful Demba Ba.

Which is better, the assist or the goal?

Mata 👉 Ba v Manchester United on this day in 2013! pic.twitter.com/VvvKRjPIGn

Mata’s exquisite invention was married to consistent performances and it is perhaps only when reflecting on the quality of those around him that it truly resonates the magnitude of his displays.

Eden Hazard, Frank Lampard, Oscar and Fernando Torres were amongst the names who shared the Chelsea dressing room, though none were on Mata’s level during his brilliant Stamford Bridge best.

None, in truth, even came close.

His goals also often came in spectacular fashion, including a stunning free-kick in defeat to Manchester United and a rocket to earn three points at Norwich on Boxing Day.

The latter saw the Spaniard swarmed on the edge of the Canaries’ penalty area, five yellow shirts gravitating towards the feet of the midfielder, though attempts to close the space proved in vain as Mata lashed home the winner at Carrow Road.

It appeared that no matter the tightness of space of proximity of defensive challenges, there was a way for Mata to find his intended target, be it an effort on goal or a pass threaded through for a teammate.

Norwich were on the receiving end of another piece of Mata genius in the season’s earlier meeting, their back-peddling backline moving ever narrower in a desperate attempt to shut all avenues to goal, only for Mata to nonchalantly find Eden Hazard with effortless accuracy.

He added a second assist in the second half, flicking a raking pass into the path of Frank Lampard to fire home.

Having been pivotal to the Blues’ success in Europe the previous season, he was once again at the forefront of their continental campaign, one which saw Chelsea drop into the Europa League.

Mata scored one and created another as Chelsea – trailing 1-0 from the first leg in Romania – beat Steau Bucharest in the last 16, before a brace of assists saw the Blues past Rubin Kazan in the quarter-finals.

He saved his mesmeric match-winning best for the final against Benfica, however, releasing Fernando Torres for the opening goal, before his stoppage-time corner was powered home by Branislav Ivanovic.

Mata had won three trophies in two seasons at Chelsea, flourishing despite the upheaval that saw Villas-Boas, Di Matteo and Rafael Benitez all take charge during that period.

His 2012/13 campaign saw him named in the PFA Team of the Year and nominated for the PFA Player of the Year award, with the midfielder perhaps unfortunate to miss out to Gareth Bale.

It proved the beginning of the end for Mata and Chelsea, however, the second coming of Jose Mourinho in the summer of 2013 proving a poor match for the midfielder, who was controversially and prematurely sold to Manchester United just six months later.

There are those of a Chelsea persuasion who still grumble at the hastiness of Mata’s exit, a footballer who lit up the the league during his time in the club’s colours.

Mata’s 64 appearances in a mammoth 2012/13 season delivered a staggering 54 goal involvements, the creative force who was in a class of his own during his brilliant best at Chelsea.