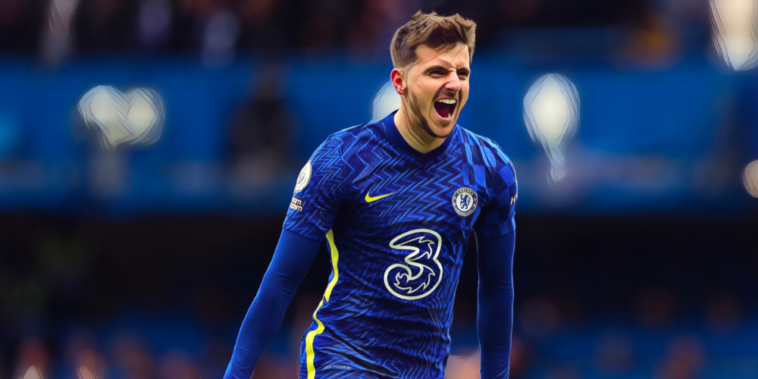 Mason Mount continued his excellent season with a goal and assist in Chelsea’s 3-0 win at Leeds, the midfielder becoming just the third Premier League player to reach 10+ goals and 10+ assists in the division this season.

Mount has grown in importance at Chelsea since stepping into the senior side and his contributions have been vital, with the current season the most productive of his career to date.

The 23-year-old ranks fourth in the Premier League for goal involvements this season (21) and no English player has provided more in 2021/22.

Mount is also just the fifth Chelsea player to reach 10+ on both metrics in a single Premier League season and we’ve decided to look at the previous names to have achieved the feat.

Frank Lampard remains the benchmark for Premier League midfielders when it comes to efficiency around goal, with the former Chelsea star one of just three players – alongside Ryan Giggs and Wayne Rooney – to have reached 100+ goals and 100+ assists in the division.

Lampard became Chelsea’ all-time record goalscorer with 211 goals for the club in all competitions, reaching double figures for Premier League goals in ten consecutive campaigns for the Blues.

He first reached 10+ goals and 10+ assists in 2004/05, a season which saw Lampard named as the FWA Footballer of the Year as Chelsea were crowned champions for the first time in 50 years.

He achieved the feat on a further three occasions, including his most prolific season in 2009/10 as Lampard scored 22 goals and provided a league-leading 14 assists for Carlo Ancelotti’s domestic double winners.

Lampard finished as the Premier League’s leading assist provider on three occasions, a record he shares with Cesc Fabregas and Kevin De Bruyne.

Didier Drogba’s excellence as a one-man forward line changed the trend in the Premier League, with the Ivorian a powerhouse of a centre-forward during Chelsea’s most successful era.

Drogba won two Premier League Golden Boots during a brilliant career at Stamford Bridge, but his ability to bring others into the game also saw him reach 10+ goals and 10+ assists on three separate occasions.

His finest season came as Chelsea won a domestic double in 2009/10, with Drogba providing 39 G/A in just 31 league starts as the West Londoners became the first Premier League team to score 100+ goals in a season.

Drogba departed Chelsea after winning the Champions League in 2012, before returning for a second single season spell with the club. He scored 164 goals and provided 87 assists for Chelsea, cementing his place as arguably the Blues’ greatest ever player.

Juan Mata’s 2012/13 season is one of the most overlooked and under-appreciated individual seasons in recent Premier League memory.

Gareth Bale’s brilliance saw the Tottenham winger scoop the Player of the Year accolades, but it can be argued that Mata was just as special in a season that saw the Spaniard star at Stamford Bridge.

Mata ended the campaign with a staggering 19 goals and 35 assists across all competitions, as his creative spark led Chelsea to Europa League success.

His league campaign brought 11 goals and 17 assists alone, with his finest performance arguably coming in a 4-2 win at Spurs as Mata scored twice and created another at White Hart Lane.

Eden Hazard’s final season with Chelsea saw him shine, with the Belgian providing more goal involvements than any other player in the division.

Hazard became just the fourth player – after Thierry Henry, Matt Le Tissier and Eric Cantona – to reach 15 goals and 15 assists in a Premier League season, winning the Playmaker Award for the most assists in the 2018/19 campaign.

He ended the season with 21 goals in all competitions, including scoring twice as Chelsea beat Arsenal 4-1 in the Europa League final.

That proved his final appearance in a blue shirt, as he completed a move to Real Madrid for a reported fee of around €100m that summer.

Mount has joined an exclusive group of illustrious names to reach 10+ goals and 10+ assists in a Premier League season for Chelsea, joining the ranks after an influential performance in the 3-0 win at Leeds.

Mount is now just one goal involvement away from doubling his haul from the 2020/21 campaign with the England international having shown huge improvement around the final third this term.

Mason Mount hits double figures for goals and assists in the Premier League this season 🙌 pic.twitter.com/LM5CGryUEM

The 23-year-old was excellent as Chelsea won the Champions League last season and remains a pivotal part of Thomas Tuchel’s side, who will be hoping to end the current campaign with more silverware ahead of this weekend’s FA Cup final with Liverpool.

Mount’s 21 goal involvements in the Premier League this season are the joint-most of any English player alongside Harry Kane.