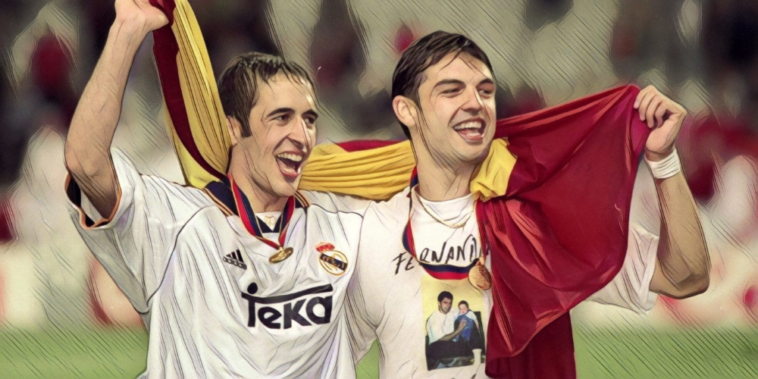 Real Madrid’s illustrious history has been built by a number of era defining strike partnerships, from Di Stefano and Puskás to Butragueño and Sanchez. Among the club’s most prolific pairings, few have concluded in such regretful fashion as Raúl and Fernando Morientes.

As he sat down to give his final media conference as a Madridista in 2005, a beaming Morientes found it impossible to contain his delight at the prospect of joining Rafa Benitez’s Spanish revolution.

“I’m going to Liverpool with all the enthusiasm in the world. I’m going with a cupboard full of trophies and for me that’s the most important thing. It hasn’t been a very pleasant few months at Real, but a lot of things that have happened at the club have contributed to that”

Taken out of context, and disregarding the destination, that statement rings true for the majority of players who passed through the revolving doors at the Santiago Bernabéu in the wake of Florentino Perez’s ascension to the club’s presidency.

Like Claude Makélélé before him, and countless others after, towards the end of his career with Los Blancos Morientes was treated like a stranger in his own home. Of all the casualties of Perez’s power mad tenure, and of this club with far more money than sense, the end of the Morientes-Raúl partnership left the most bitter taste.

Born on the outskirts of Madrid, in the suburb of San Cristóbal de los Ángeles, Raúl González Blanco’s glittering career might have panned out so very differently. Ironically, as an aspiring youth he was on the books at fierce city rivals Atlético Madrid, before penny-pinching Atleti president Jesús Gil scrapped the Colchoneros’ youth academy in 1992.

With legendary striker Emilio Butragueño nearing the end of his illustrious career, Valdano earmarked the emerging Raúl as his natural successor.

At first sight, the ungainly youngster looked anything but organic. Appearing bow-legged and hunched, he wasn’t the quickest, nor the strongest. And yet, his first touch was flawless, his finishing instinctive and lightning quick. He was astute and hard-working. As the Spanish put it, Raúl was a ‘futbolero’ – one who is unabatingly impassioned by the sport.

Having made his senior debut against Real Zaragoza in October 1994, Raúl endeared himself to the Bernabéu faithful a week later, bagging his first senior goal for the club in the Madrid derby. His strike, a perfectly placed left-footed shot from the edge of the area, put the gloss on a thrilling 4-2 victory for Los Merengues, who went on to win La Liga that season.

📅 #OTD in 1994, Raúl González made his Real Madrid debut. The rest is history…

As Raúl flourished in the capital, down south, in Albacete, another wide-eyed forward was busy carving out the foundations of a stellar career. Having scored seven goals for the relegation threatened Queso Mecánico, a teenage Fernando Morientes was snapped up in the summer by UEFA Cup winners Real Zaragoza.

Deadly in the air and clinical with his feet, after scoring an impressive 34 goals over two seasons for Zaragoza the Spanish press heralded the old-school centre forward as Spain’s future number nine. In the capital, Real’s incumbent manager Jupp Heynckes concurred and, in the summer of 1997, signed Morientes for £4.5m.

‘El Moro’ hit the ground running, dislodging senior forwards Davor Šuker and Predrag Mijatović as he ended a fruitful debut campaign alongside Raul in Heynkes’s starting eleven. Between them, the pair bagged 22 league goals, but were powerless to prevent Real from slumping to a disappointing fourth-place finish in La Liga. Any unrest among fans was quickly quelled, with Real defeating Juventus in the Champions League final – their first success in the competition for 32 years.

The Raúl and Morientes partnership blossomed thereafter, with the duo developing an almost telepathic understanding on the field and a fraternal bond off it.

The following years would see them win two league titles and another two European crowns together, with the pair playing a pivotal role in each – particularly their Champions League triumph in 2002.

Although Raúl and Morientes scored nine times en route to the final, the victory is mostly remembered for Zinedine Zidane’s stunning volley against Bayer Leverkusen in Hampden Park.

Their partnership extended to the national team, where the two featured at Euro 2004, and at the World Cups in 1998 and 2002. The pair retired from international duty in 2007, trophyless, just as Spain’s golden generation was emerging. Their withdrawal from the national team in the lead up to Euro 2008 became a matter of public debate, a hideously schismatic one at that.

At Real, their bond was ultimately broken by Florentino Perez’s transfer strategy, a policy centred around the acquisition of the world’s finest talent. Having honoured his pledge to sign a ‘galactico’ every season, prising Luis Figo away from arch rivals Barcelona and Zidane away from Juventus, Perez set his sights on his next target – a star striker.

Of course, this wasn’t the first time Morientes had faced the threat of would be usurpers. In the summer of 1999 manager John Toshack splashed out almost £40m on two new strikers – Arsenal’s Nicolas Anelka and Bosnian striker Elvir Baljić. This troubled pair, who managed a combined total of just three league goals for the club, offered little in the way of competition.

However, on this occasion, the pretender to Moro’s throne was a bona fide superstar. If the rumblings were true, the arrival of Brazilian international Ronaldo from Inter Milan was imminent.

In the wake of Perez’s sensational signing of ‘O Fenômeno’, Morientes tumbled down the pecking order and, despite all that he and club captain Raúl had achieved together, found his days numbered. Sad really, that such a selfless man, who spent so much time in his prodigious partner’s substantial shadow, had been reduced to ‘the expendable one’ of the two.

Ultimately, the decision to cast Morientes out would come back to haunt Perez.

After a proposed move to Schalke fell through, Real’s president quickly pushed through a deadline day loan to Monaco. In his haste to get the deal done, Perez neglected to insert a clause preventing Morientes from playing against his parent club and, naturally, the two clubs were drawn against each other in the Champions League quarter-finals. As Morientes put it, “Fate brought me up against my friends.”

Having netted a vital away goal for the Monegasques in a 4-2 defeat at the Bernabéu, Morientes – the tournament’s top scorer with 9 goals – bagged a goal and an assist in the reverse fixture, as Didier Deschamps’ underdogs sent Carlos Queiroz’s star studded Madrid crashing out of the competition.

For the purists, for the neutrals, it was a case of justice served. In their anger and disbelief at what they had just witnessed, Real fans pondered on what could, nay should have been.

Morientes returned to Madrid thereafter. However, following Michael Owen’s arrival at the club that summer, he found his game time limited under manager Vanderlei Luxemburgo and joined Liverpool in the winter transfer window.

As for Raúl, when he announced his intention to leave the club in 2010 the assumption was that the two-time Pichichi winner would head for the United States or Qatar in search of one last bumper pay day.

To the shock of the football world, the veteran striker chose Gelsenkirchen as his next destination. While at Schalke he became a cult hero, so much so the club temporarily retired the number seven jersey following his departure.

Perhaps the most feared strike pairing in Europe in their heyday together, Morientes and Raúl represented the old-school values that brought Real Madrid’s greatest successes. Their undying friendship, built on a mutual respect and admiration, is perfectly encapsulated by Morientes.

“For me, it was an honour to play alongside the greatest Spanish player in history, not only because I played next to him but because we have maintained a friendship. I do not know what I have brought him, but he gave me a lot”