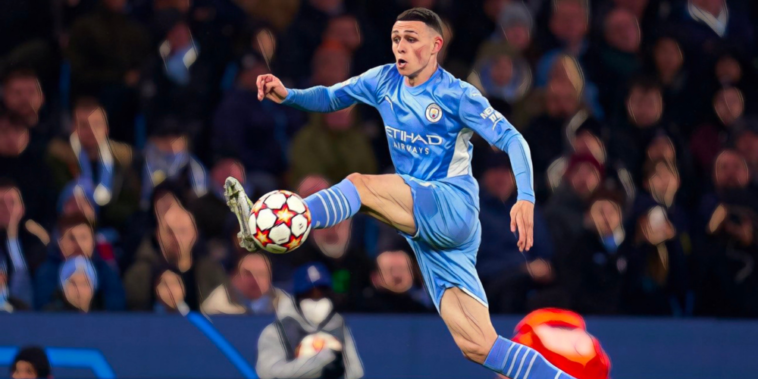 Phil Foden continued to enhance his growing reputation with another game-changing performance for Manchester City this week, with the forward coming off the bench to help his side to a 1-0 win over Atletico Madrid.

Foden was on the pitch for just seconds when his moment of invention created the game’s only goal, threading a pass through the Atletico defence to Kevin De Bruyne, whose goal handed City a first leg advantage in the Champions League quarter-finals.

The 21-year-old has already proven himself as a player for the biggest occasions and his latest assist continued an impressive record in the Champions League.

We’ve decided to look how Foden compares to past precocious talents and rank the five players with the most UCL assists for English clubs aged 21 and under.

Raheem Sterling broke into the Liverpool side as a teenager and recorded his first Champions League assist with the Reds, but it was a move to Manchester City that accelerated his development into one of Europe’s most effective wide players.

He provided a further four assists in the Champions League before his 22nd birthday, after completing a £49m move to the Etihad in 2015.

Sterling has since been a regular match-winner for Pep Guardiola’s side in continental competition and boasts a record of 44 goals and assists in 64 Champions League appearances since making the move to City.

His 24 goals in the Champions League trail only Wayne Rooney (30) among all English players.

Trent Alexander-Arnold has been a continued source of creativity since breaking into the Liverpool side, setting a whole host of records for goal creation from full-back.

The 23-year-old has reached double figures for assists in three of the past four Premier League seasons, including twice breaking the divisional record for assists in a single season by a defender.

Alexander-Arnold has recorded a career-best 17 assists in all competitions this season and is just three short of breaking his own Premier League record for a campaign.

He registered five Champions League assists before his 22nd birthday, with perhaps none more memorable than the quickly-taken corner that led to Liverpool’s fourth in that comeback win over Barcelona.

Theo Walcott’s record-breaking feats as a teenager included becoming England’s youngest ever debutant and hat-trick scorer, having shot to prominence when included in the Three Lions’ squad for the 2006 World Cup as a 17-year-old.

Walcott had earlier signed for Arsenal from Southampton and broke into the Gunners side under Arsene Wenger, making 32 appearances during his first full season and featuring in the Champions League.

Walcott provided six Champions League assists whilst aged 21 and under, including a scintillating solo run to set up Emmanuel Adebayor during a thrilling quarter-final clash with Liverpool in 2008.

He made 59 appearances in Europe’s elite competition for Arsenal, scoring 15 goals and providing 10 assists.

Foden’s assist for Kevin De Bruyne took him to seven assists in the Champions League, with the Manchester City starlet not set to turn 22 until May.

City had looked set for a frustrating evening against Atletico Madrid until Foden’s intervention from the bench, his arrival changing the game with his assist for De Bruyne a moment of real class.

Foden now has 15 goals and assists in just 23 starts in the Champions League, a remarkable return for a footballer fast rising to a status as one of the Premier League’s most influential players.

Outstanding in tight areas and possessing both adventure and vision in his game, he could prove decisive in City’s challenge for the Champions League this season.

Cesc Fabregas leads the rankings for UCL assists for English clubs aged 21 and under, with the former Arsenal and Chelsea midfielder having been an assist machine during a long career at the top of the game.

Fabregas broke into the Arsenal side as a teenager and emerged as the club’s influential force in the post-Invincibles era, taking on the creative responsibility of the side with well-weighted passes between lines.

He racked up 10 assists in the Champions League before turning 22, though failed to win the competition despite successful spells at Arsenal, Barcelona and Chelsea.

Fabregas ranks second for assists in Premier League history, his 111 goals created behind only the 162 assists of Ryan Giggs.