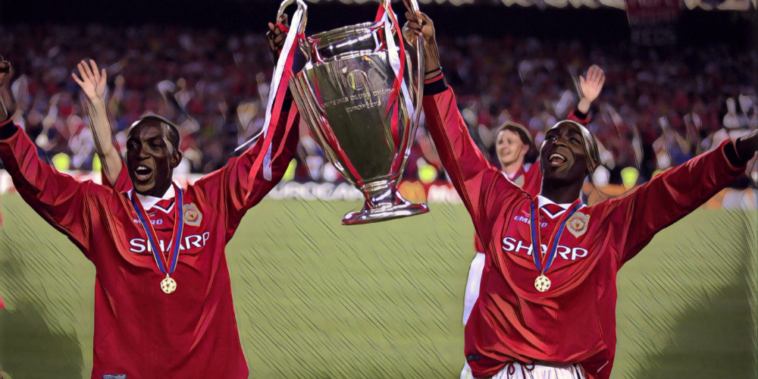 Dwight Yorke and Andy Cole are arguably the Premier League’s most fondly remembered partnership, one in which two footballers worked in sublime synchronisation to inspire a golden era for their side.

Manchester United’s dominance of the first two decades of the Premier League was a testament to Sir Alex Ferguson’s ability to refresh, revive and evolve his side.

Winners of the Premier League in four of the first five campaigns of the rebranded division, the Red Devils had emerged from a 26-year slumber to become England’s dominant force, having laid dormant for almost two decades before Ferguson’s arrival.

The challenges of big-spending Blackburn and Kevin Keegan’s free-scoring Newcastle side had largely been seen off during the mid-nineties, before the arrival of Arsene Wenger at Arsenal presented a new, tougher threat to the Mancunian supremacy.

Wenger’s first full season in charge had seen Arsenal claim a domestic double, as a Red Devils’ side adjusting to the post-Eric Cantona era had been pipped to the post by the north Londoners.

Ferguson’s response was the pursuit of greater firepower.

Patrick Kluivert, who had starred as part of Ajax’s 1995 Champions League winning side before a difficult spell in Milan, has been the club’s leading target, but the forward instead headed for Barcelona.

United’s attention turned towards Aston Villa and Dwight Yorke in the closing stages of the 1998 transfer window, though John Gregory’s side were reluctant to sell a player who had been a revelation since moving to a central role.

The price was a club-record £12.6m, but the record investment was not a guarantee of game time, with Ferguson initially viewing the Trinidad and Tobago international as just one of his four forwards, alongside Cole, Ole Gunnar Solskjaer and Teddy Sheringham.

It was not until October of the 1998/99 season where we witnessed the first real glimpse of a soon-to-be potent partnership, as Cole and Yorke started alongside one another at Southampton in the absence of both Solskjaer and Sheringham.

The understanding was instant.

Both forwards found themselves on the scoresheet in a 3-0 win and from there the seed of a partnership began to bloom.

Drawn in the tournament’s Group of Death alongside both the Catalans and Bayern Munich, the Red Devils travelled to Spain knowing a point would be enough to seal progress.

In a classic contest the two scored the visitor’s goals in a thrilling 3-3 draw at the Camp Nou, the second of which lives long in the memory.

Yorke’s dummy of Roy Keane’s pass deceived the Barcelona defence and allowed the ball to find the feet of Cole, who created further space – and Catalan chaos – with an instinctive one-two with Yorke.

Cole made no mistake with the finish after receiving the return pass, in a goal the forward later described as ‘one of the best team goals in Champions League football’.

“That season and the seasons after, we scored a few goals like that, the understanding was phenomenal,” Cole told the UTD podcast.

“No communications, we didn’t have to call, we just knew where each of us was going to be. That’s what, for me, makes it much more satisfying that we could play football like that without even communicating.”

The goals continued to flow as the duo dovetailed on the same wonderful wavelength, netting three times between them in a 4-1 thrashing of West Ham in January, before hitting five the following week at Leicester.

Yorke helped himself to a hat-trick at Filbert Street with Cole added a brace in a 6-2 victory, the extroverted delight at each other’s success demonstrating the bond formed both on and off the pitch.

It was a partnership that had all the right ingredients.

Fluid in their movement and comfortable to interchange, the willingness of either player to drop deep or run in behind saw Premier League defences struggle to contain their chemistry.

Striker’s are often a selfish breed, but the friendship formed between the duo ensured that the team came first whenever opportunities arose around goal.

“The way he played complimented the way I played and vice versa,” Cole said.

“I loved playing with him. I loved the energy he brought. Yorkie brought something out of me [that] I knew I had in me. He was on the back-burner and the way he conducted himself… This is what I’ve been waiting for.

“Me and Yorkie are polar opposites but we understood each other like we were born together. We’ve never argued, never had a cross word, nothing. We’ve never fallen out.”

Exceptional players in their own right, together in tandem Cole and Yorke became unstoppable and their electric understanding was the spark that ignited arguably the greatest season in English football history.

Propelled by the goals of their prolific partnership, the Red Devils began to dream as the climax of the 1998/99 campaign approached, remaining in contention for each of the game’s biggest prizes.

Defeat to Middlesbrough on Boxing Day proved the club’s final loss of the Premier League season, as a 20-game unbeaten run ensured Ferguson’s side beat defending champions Arsenal to the title.

Cole and Yorke combined for 35 goals in the league alone, the latter sharing the Premier League’s Golden Boot alongside both Michael Owen and Jimmy Floyd Hasselbaink, as Cole finished just a goal adrift of the league’s trio of leading scorers.

FA Cup success followed – the club’s third domestic double in six seasons – but it was the duo’s performances in Europe that immortalised their standing amongst the Stretford End.

Yorke’s double had downed Inter Milan in the Champions League’s last eight, before Ferguson’s side faced Juventus in a daunting semi-final clash, a 1-1 draw at Old Trafford leaving the Italian giants as favourites to reach the final.

Juventus had reached each of the previous three Champions League deciders and looked set for a fourth final after Filippo Inzaghi’s early brace saw the Bianconeri race into a two-goal lead at the Stadio delle Alpi.

Roy Keane’s header reduced the deficit, before Cole and Yorke came to the fore.

Cole’s hoisted cross from the right landed perfectly onto the head of his partner waiting in the centre, as Yorke guided home to put the visitors in control of the tie before the interval.

Juventus pushed on in the second half in search of the goal needed for progress, only for another Cole-Yorke suckerpunch to end their dream and confirm the Red Devils’ passage to the Camp Nou final.

Yorke skipped through two desperate challenges before being hauled down by the goalkeeper for a certain penalty, only for Cole to arrive on the scene and turn home the loose ball to seal a famous victory.

Neither managed to find themselves on the scoresheet during a dramatic success against Bayern Munich in the final, but few contributed more to the club’s historic treble-winning season than their devastating duo.

The success of their striking synergy continued the following campaign as the title was retained by a record margin of 18 points from Arsenal, the formidable force of Cole and Yorke combining to rattle in 46 goals.

It seems odd, given the nostalgic fondness in which the pairing is remembered, that their exploits lasted little longer, the arrival of Ruud van Nistelrooy seeing Cole move on six months into the 2001/02 campaign.

Yorke fittingly followed Cole to Blackburn in July 2002 as the duo reunited at Ewood Park, though it proved a farewell tour of their centre-forward collaboration as opposed to a reigniting of their former fortunes.

Their Old Trafford exploits have cemented the Cole-Yorke coalition amongst the pantheon of Premier League partnerships however, arguably as the division’s greatest union given their unmistakeable natural understanding.

One is very rarely mentioned without the other following in almost the same breath, an indicator of how the duo illuminated English football in telepathic tandem.