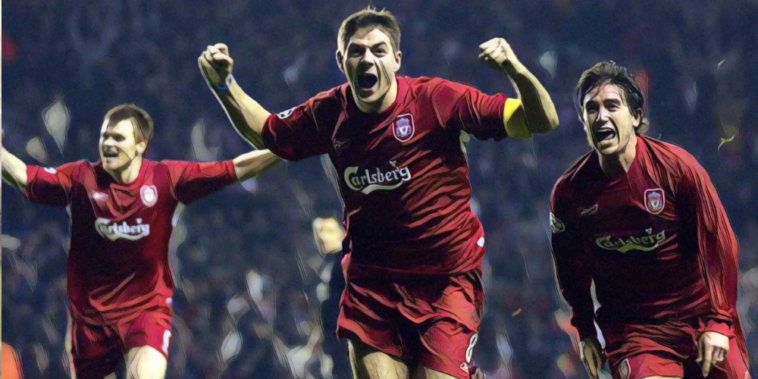 The final stage of any major silverware success often represents the defining image of a tournament, but each path to triumph is littered with moments that changed the course of history.

Liverpool’s shock success in the 2005 Champions League stunned Europe, with Rafael Benitez’s side rank underdogs to win a first European Cup in over two decades.

Benitez had taken charge at Anfield the previous summer, imported from Valencia following a successful tenure at the Mestalla, winning two league titles and the UEFA Cup with the Spanish side.

With the reign of Gerard Houllier having reached a point of stagnation, Benitez was viewed as the ideal candidate to return Liverpool to a status where the club could challenge the elite both in England and further afield.

Benitez had made a mixed start domestically, whilst a Liverpool side competing in just their third campaign of the Champions League era suffered from similar inconsistency in continental competition.

Defeats at both Olympiakos and Monaco had left Liverpool with work to do heading into their final group stage fixture, a meeting with the former under the lights at Anfield.

“I don’t want to wake up tomorrow morning in the Uefa Cup.”

Steven Gerrard had addressed a press conference before Liverpool’s crucial Champions League clash, with progression to the knockout stages hinging on the Reds’ result against the Greek side.

Benitez’s team were in need of a two-goal win to ensure their place in the competition’s last-16 and it proved a night of difficulty and pulsating drama.

With both sides well aware of the permutations for progression the game began with Liverpool in the ascendancy, Milan Baros seeing a goal disallowed in the opening minutes.

The Reds continued to push forward as Sami Hyypia headed wide from Gerrard’s corner, but failed to find a breakthrough as Olympiakos held firm to keep the contest in their favour.

As the mid-way point of the first half arrived, it was the visitors who seized the advantage. Rivaldo – enjoying something of an Indian Summer in the colours of Olympiakos – was felled after a mazy run towards the Liverpool area, with the former Ballon d’Or winner stepping up to convert a deflected free-kick beyond Chris Kirland.

The goal proved a crushing blow to Liverpool and the home crowd, who now needed three goals to avoid an early elimination.

The half-time break provided Benitez with a chance to regroup and a coach known for his pragmatism gambled with a change at the interval, introducing forward Florent Sinama-Pongolle for Djimi Traore.

Pongolle’s impact was immediate as Liverpool again raced out of the traps, converting Harry Kewell’s cross to breath new life into the game and increase optimism around Anfield.

Benitez, however, was unmoved, a quick glance at the watch the only change in his demeanour as those around him erupted in hope.

Liverpool continued to push forward in search of a second, but both Gerrard and Kewell found themselves frustrated as the game threatened to ebb away, the former seeing an effort ruled out for a foul by Baros in the build-up.

Having seen his first change alter the game, Benitez threw on another attacking alternative as Neil Mellor replaced Baros and the academy graduate needed just three minutes to set up a grandstand finish.

Antonio Nunez’s header was pushed out by the goalkeeper, with Mellor reacting quickest to slam home from close range and leave Liverpool within one goal of the knockout stages.

🔴 #OTD in 2004: Liverpool needed 3 goals to qualify after Rivaldo's opener.

The Liverpool captain had been at the centre of the clash without tangible impact, coming close on occasion and perhaps finding himself fortunate to avoid dismissal for a reckless kick out.

The side Benitez had inherited had been far from vintage, but in the homegrown captain he had a player capable of dragging much mediocrity to greater heights.

Gerrard’s legend at Liverpool was built on an ability to find something in reserve when it mattered most, with his stunning salvo against Olympiakos amongst the most memorable of his decorated time on Merseyside.

As the seconds ticked ever closer towards the final whistle and UEFA Cup football loomed, the home side awaited one final chance to strike a decisive blow to their stubborn opponents.

Camped inside the Olympiakos half, it was Jamie Carragher who found himself in an unfamiliar position advanced high on the left flank.

The defender, bidding to keep his cool amidst the anxious Anfield atmosphere, checked inside before bending a cross into the direction of Mellor, who showed great awareness under pressure to cushion a header to the edge of the box.

Arriving was Gerrard, who even for his standards could hardly have wished for a better connection on the bouncing ball.

Players of inferior class and confidence would perhaps have recycled possession, but for Gerrard – so often the epicentre of his side with bounding box-to-box energy – this was Liverpool’s moment, his moment, as the match hung in the balance.

Gerrard’s hit, one of technical perfection and maximum power, burst beyond the despairing dive of Antonios Nikopolidis to spark pandemonium amongst the masses and seal Liverpool’s passage into the next round.

Listen without commentary for the sound of the ball, the net and the bedlam.

What a night that was
pic.twitter.com/vC2WteRuwN

It was Roy of the Rovers stuff from a player who developed a penchant for match-winning moments, with Gerrard admitting his sensational strike was amongst the finest of his career.

“When you are in that position and one falls for you it’s make or break at that moment,” Gerrard later said in an interview with the Independent.

“Luckily for me it was one of the sweetest strikes I have ever hit. Just such a relief to see the net go.

“If I had to pick my favourite goal for connection and also the reaction of the crowd – that’s the one.

“The memory is still so strong. When I look back over my career so far it pops up as one of the main games. And it started the journey to Istanbul. And Andy Gray’s commentary made the goal even better than it was.”

Gerrard’s goal proved the catalyst behind an unforgettable run for Benitez’s side, who relished their underdog status to eliminate Bayer Leverkusen, Juventus and Chelsea to reach the final.

The showpiece itself proved arguably the most captivating Champions League final of all time, as the Reds rallied from three goals down at half-time to upset AC Milan on penalties in Istanbul.

As Gerrard hoisted aloft club football’s biggest prize in The Atatürk Olympic Stadium, it was the culmination of a magical venture that truly reached lift off with his late, late strike to down Olympiakos at Anfield.