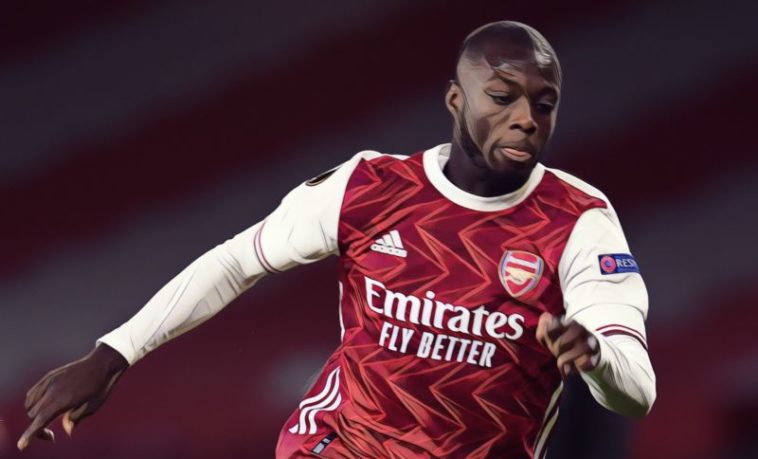 Within a matter of weeks, Nicolas Pepe has gone from a man destined for the transfer list, to the new hope of Arsenal’s attack. The forward whose Gunners career has been burdened by the weight of his price tag, could finally be ready to prove his worth.

After Arsenal’s goalless draw with Leeds United in November, Mikel Arteta stood for the post-match interview visibly fuming. “Pepe let the team down” he said bluntly. “It’s unacceptable”. At this point, the writing looked on the wall for Arsenal’s record-signing.

The Wilfried Zaha alternative that Unai Emery didn’t want, many would have wondered if the arrival of a new manager in Arteta could breathe new-life into a player desperately struggling to find form in England.

The summer-signing of 32-year-old Willian from Chelsea, to play in the Ivorian’s position, was a damning verdict. The petulant red-card at Elland Road looked like the final nail in the coffin. What has happened in the last three weeks since, however, suggests the start of an unexpected turnaround.

With three goals in his last four starts Pepe is finally delivering, and with some consistency. When Pierre-Emerick Aubameyang’s absence for the Premier League game against Southampton two weeks ago was confirmed, supporters would be forgiven for expecting to see Gabriel Martinelli be given an opportunity by Arteta. However, Pepe’s inclusion on the left-side of the attack was rewarded with a smart finish in the seventh minute of the game.

Safe to say the haters have been silenced pic.twitter.com/b2lW0VWliO

A dangerous performance against Manchester United followed, and a fantastic solo-goal in the defeat against Wolves demonstrated a run of form that Arsenal fans have got used to only seeing in fleeting moments.

Then in Saturday’s loss at Villa Park, Nicolas Pepe seemed to be the most likely source of an elusive equaliser. Just the fact that Mikel Arteta didn’t substitute the former Lille attacker on Saturday speaks volumes. Frequently the first player the manager has opted to bring off regularly in the past, his completion of 90 minutes here was a measure of his rising stock.

Pepe is beginning to have tangible effects in the final third. He has had 12 shots during this impressive four-game run in the side, the same number he’d achieved in the first 12 league games he had appeared in this season.

The 25-year-old is getting involved in the team’s offensive build-up play too, achieving 11 shot-creating-actions since the match at Southampton, having only registered five up until then, in the Premier League.

No player created more chances than him in the win against Southampton and draw with Manchester United and he came out on top for Arsenal’s shots taken in the following two games against Wolves and Aston Villa.

Pepe’s revival has coincided with his shift to the left-hand side. During his brief period playing that position at Arsenal, he has three goals and one assist in four games. The once-maligned forward looks much comfortable on the side of his stronger foot. Playing on the right, Pepe comes back inside too much, making it easy for the defender to push him back, using too many touches in trying to fashion the opportunity to shoot.

Now on the opposite side, he is making more confident and direct runs towards the box from out-to-in. He is able to position his body shape to receive the ball while still facing the goal, and is able to control and turn in on goal in one motion, evident in his goal against the Siants. He also releases shots quicker, as he receives the ball on his preferred foot.

Hector Bellerin’s tactical use on the right-hand side also inhibits Pepe. The Spaniard’s preference to move inside and connect with the midfield means that he often occupies the space the Ivorian wants to fill.

Pepe is forced to stay wide to keep the game stretched and has never proven to be an effective touchline player. The more natural overlapping on the left-hand side encourages Pepe to operate in the half-space where he is most dangerous.

In the away victory against at St. Marys, where Pepe announced his return to form, only one pass combination was completed more than Granit Xhaka to Nicolas Pepe. The growing relationship with the improving Swiss means Pepe is getting the ball quicker, and with more precision from the midfield.

He has also finally been given the opportunity to play with a traditional No.10 following the introduction of Emile Smith-Rowe into the team. There have been too many situations in Pepe’s Arsenal career in which he has received the ball wide, facing an organised and packed defence which he is expected to beat.

Smith-Rowe’s constant availability and capability to find space means Pepe always has a simple, forward pass to hand. He is using the youngster to bounce the ball off and continue progressing forward. During his threatening performance against Manchester United, Pepe regularly used Smith Rowe to link up with, and spent the game receiving the ball in more dangerous positions.

“If you ask me personally what I think of the performance that he put in overall, in all the phases of the game, I’d say it is the best he has played” claimed the Arsenal manager, discussing Pepe in the lead up to Saturday’s game against Villa. Maybe the greatest contributor to earning Arteta’s trust has been his improving defensive efforts.

Against Southampton he made seven ball recoveries, made three clearances, two headed clearances and attempted four tackles. The next few performances have followed suit, with his recovery of possession in the final third a trademark of this recent purple patch, visible in his solo-goal against Wolves in which the move was started by his front-footed tackle in the opponents half.

Nicolas Pepe just would not be stopped 😤

Wins the ball back, beats his man, beats another, and finds the top corner for a great individual goal! pic.twitter.com/3BTrpWazS6

Only Gunners skipper Aubameyang (37 goals, 4 assists) has been involved in more goals for Arsenal since the start of last season than Nicolas Pepe (15 goals, 13 assists). He is a player who has suffered from the heightened expectations that an exaggerated price tag brings, and the value he has delivered in his first 18 months in England is possibly underestimated.

£72m was too much to pay for the former much-hyped winger, but it remains an indictment on the club, as opposed to the player. Despite green shoots of recovery appearing in his recent football, that remains the case. What fans have demanded is more consistency, and he is beginning to show the clearest signs yet of that coming to fruition.

Pepe’s Arsenal career hit rock-bottom at Elland Road three months ago. He had dug his own grave under the watchful eye of a frustrated Arteta. The loss of faith from sections of a previously patient Arsenal support seemed to signal the end.

From there, his character must be commended. Back in the team, back scoring goals, and thriving in an Arsenal side that are still short of the required level, Nicolas Pepe has simplified and refined his game. The next job is redefining himself. If these performances continue, the £72m man will see less talk of the price tag, and more about his football.