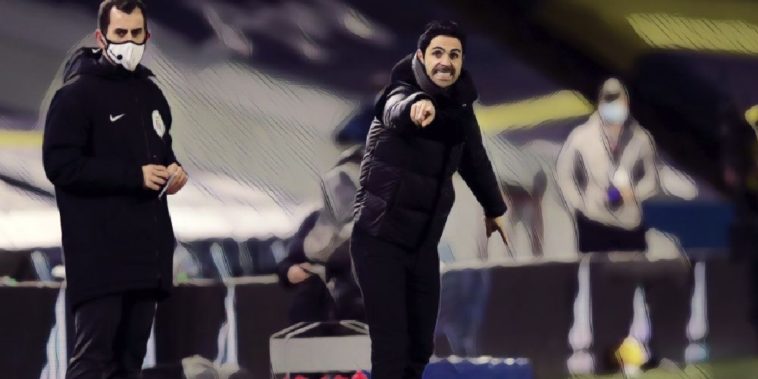 Mikel Arteta was critical of Nicolas Pepe after the club-record signing got himself sent off in Arsenal’s 0-0 draw with Leeds.

Leeds were the better side throughout much of the first half, though with Arsenal looking much more solid at the back under Mikel Arteta, the West Yorkshire side were largely restricted to a number of speculative efforts from around the edge of the box.

In-form striker Patrick Bamford did force a save out of Gunners ‘keeper Bernd Leno on the half-hour mark, though his effort lacked enough conviction to truly trouble the German.

Just five minutes into the second period though and Arsenal were reduced to 10 men, Nicolas Pepe petulantly reacting to an ongoing tussle with Ezgjan Alioski with a headbutt on the Macedonian, receiving his marching orders after referee Anthony Taylor took one look at the pitchside monitor.

Leeds’ domination continued after the red card, though struggled to break down an Arsenal side that had become even more defensive, the Gunners trying to use the pace of Aubameyang and substitute Bukayo Saka on the break.

Arsenal survived playing almost 40 minutes with 10 men after Nicholas Pepe’s red card as they ground out a 0-0 draw with Leeds United.

Marcelo Bielsa’s side twice hit the post late on, first from Bamford header before summer signing Raphina also struck the outside of the woodwork deep into stoppage time.

Speaking afterwards, Mikel Arteta was understandably frustrated at Nicolas Pepe for cheaply getting himself sent off with 40 minutes to play, his side holding on for their first draw of the season.

“Considering how early we got Pepe sent off we have to take it,” he told Sky Sports. “I never like a draw but in the circumstances, it’s a point. It is unacceptable.

“The first half there were two different periods. The game broke a bit, we started to give the ball away and led to them having the space to break. The second half it was a matter of defending well and staying patient and using the pace of our players in the space they were leaving.

“With 10 men it is a big disadvantage. I really liked the personality of the team when Pepe let the team down, how we stuck to do what we had to do and had a moment or two to win the game, but obviously it makes it really difficult.”

The result leaves Arsenal in 11th on just 13 points from their opening nine games which have brought just nine goals. Next up is an away trip to face Molde in the Europa League before a tricky home game against Wolves.

Tweets of the Week: Rashford’s gafs, official sources, and the most Jose vs Pep match of all-time