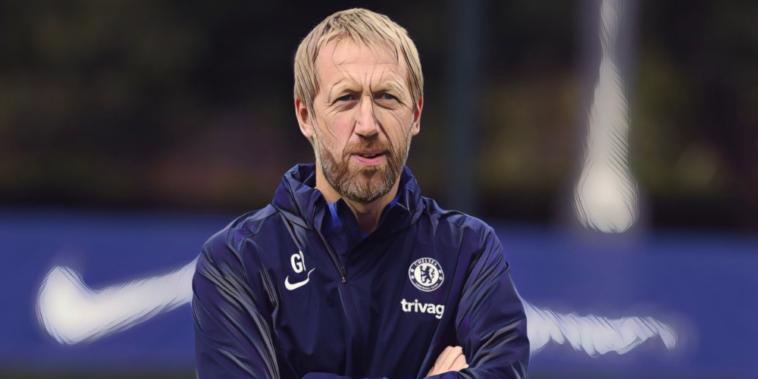 The appointment of Graham Potter in the first week of September was very much a departure for Chelsea whose profiling of prospective new managers has typically targeted proven winners down the years.

The long rollcall of former coaches who have inhabited the Stamford Bridge dugout since Roman Abramovich took ownership of the Blues in 2003 reads like a prestigious who’s who of league and Champions League winners, the only notable exception being Frank Lampard, who was favoured for his esteemed legacy at the club. It should also be acknowledged that around the time of Lampard’s appointment, Chelsea were hamstrung by a transfer ban. This made it difficult to simply pluck an available name off the very top shelf.

Elsewhere, it has exclusively been managerial royalty, some princes, others kings. Mourinho. Ancelotti. Hiddink. Conte.

So where does Potter fit among such elite fare, a coach who led Brighton to 15th, 16th and 9th in the Premier League across his three full seasons on the south coast? It needs saying of course, that these league placings, along with the significant culture advancement, player recruitment and performances Potter oversaw at the Amex amounted to a superb achievement all told, one that had him widely pegged as an extremely bright and capable manager. They are not however, feats that would usually overly impress Chelsea, or at least not enough to have them handing out a five-year deal and the keys to their kingdom.

In times past – from 2003 until very recently – Potter would have had to win a major honour before Chelsea even considered adding him to any short-list.

Does this suggest therefore a change in philosophy is afoot at the Bridge, with new owner Todd Boehly happy to go with up-and-coming potential now over a ready-made, well-established name? The answer to this will reveal itself in due course, primarily via future decisions undertaken in the transfer market and in Chelsea’s successor to Potter whenever that time may come.

The five-time Premier League champions subverting a long-held strategy is just one of several interesting avenues to explore regarding Potter’s arrival in West London, another being how the players will take to him.

This gross side-effect to player power can be multiplied many times over when it’s attributed to Chelsea’s more experienced stars because while casting absolutely no aspersions on the character of Thiago Silva, what we have at present is a legend of the modern game, who has lifted 29 trophies, and played under Allegri, Scoleri and Ancelotti, now taking instruction from a man whose biggest accomplishment was guiding Brighton to mid-table.

This really shouldn’t matter, but regrettably, it does. We’ve seen it matter elsewhere.

It appears not to be a consideration however in this instance with Potter astute – and humble – enough to recognize the danger and cut it off at source.

One of the first things he did on taking the reins was to inform each and every member of his squad that he would be chatting individually to them prior to the international break and true to his word, that’s exactly what transpired.

Crucially, in each one-on-one session he listened, as much as he talked, gauging what each player wanted from their time at the club as they worked out together what was for the best. It has subsequently been reported that the players were impressed with his down-to-earth demeanour in these discussions and what comes across is that Potter acknowledged the threat of player power and turned it into a positive. It was a clever move.

Furthermore, it’s an approach he has extended to Cobham, with training said to be relaxed and low-key, the aspiration being for the players to enjoy going in to work each morning. Potter didn’t enter the fray and immediately call the shots, demanding improvements and making clear who was the boss. Instead, he has merely facilitated, affording his stars the intelligence to figure it out for themselves. The upshot has been a happier and more productive camp.

In his tactics too, Potter has been wary not to change things for the sake of changing, or to stamp his authority on matters too quickly.

It helps in this regard that Chelsea’s set-up under Thomas Tuchel was not hugely different to Brighton’s but where he has made tweaks the 47-year-old has taken the time to explain them, calmly, from one adult to another. Raheem Sterling’s slightly new role will probably feel to the forward as much his idea as Potter’s. That’s good management.

Mason Mount meanwhile has been relishing playing more regularly in his ideal number 8 role. Barring injury, his involvement with England at the forthcoming World Cup is secured and that couldn’t have been claimed with total confidence just a month or two ago.

The results from such pragmatism has been there for all to see. At the time of writing, Chelsea have just drawn away at Brentford, which makes it five wins and two draws in the Potter era. Additionally, for five consecutive games they’ve kept clean sheets and that hasn’t happened for a long spell.

It’s early days yet, of course it is, but the surprising and anomalous appointment of the former Swansea and Seagulls man has thus far avoided any initial pitfalls and this bodes very well for the future.

Indeed, it is not far-fetched to suggest that when the managerial royalty of the club’s past and present is summarized in years to come it will read as such: Mourinho, Ancelotti, Hiddink, Conte, and Graham Stephen Potter.