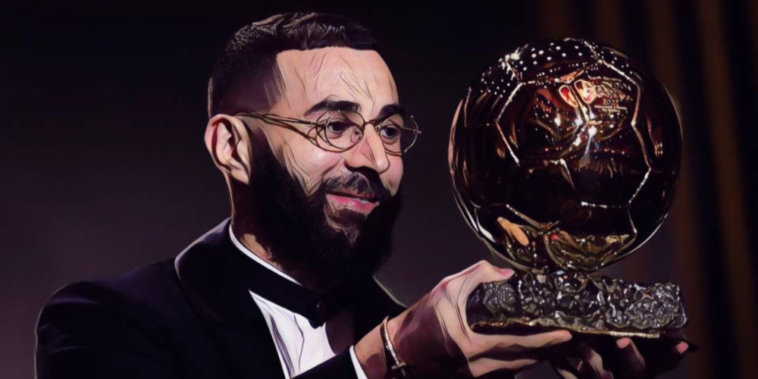 Karim Benzema has been crowned as winner of the Ballon d’Or in 2022, with the Real Madrid forward recognised as world football’s finest following a phenomenal season for the Spanish giants.

Benzema’s goals inspired Real Madrid to a Champions League and La Liga double, as he struck 44 goals in just 46 appearances during a career-best campaign at the Bernabeu.

The 34-year-old becomes just the second player – after Luka Modric – to win the award outside the Lionel Messi and Cristiano Ronaldo duopoly since 2008 and is a deserved winner following an outstanding individual campaign.

Following the confirmation of Benzema’s coronation, we’ve decided to look at the top 10 of the Ballon d’Or vote.

Erling Haaland is a name expected to feature at the top end of this vote for some time to come, with the Manchester City forward placing inside the top ten in 2022.

Haaland’s performances for former club Borussia Dortmund were recognised as he placed 10th, having scored 29 goals in all competitions for the Bundesliga side in 2021/22.

Ranked at the 10th place for the 2022 Ballon d’Or! @ErlingHaaland@ManCity#ballondor pic.twitter.com/3kIyrrUFCD

The 22-year-old signed for City during the summer and has had an explosive start to his Premier League career, with 15 goals in just ten league appearances for Pep Guardiola’s side. That haul includes three hat-tricks and the Norwegian sensation will have ambitions of becoming the first Premier League player to win the Ballon d’Or since 2008 in the coming campaigns.

Luka Modric won the Ballon d’Or in 2018 and has again placed inside the top ten, having been a crucial component of Real Madrid’s double-winning side.

The Croatian schemer retains an evergreen class and impressed during the Spaniard’s run to Champions League success under Carlo Ancelotti, with Los Blancos also crowned as La Liga champions during a memorable 2021/22 campaign.

Even at 37, Modric has shown few signs of slowing down with 12 assists in 45 appearances across all competitions last season. One of the great midfielders of his generation.

Last season was a breakthrough campaign for Vinicius Junior who began to fulfil his vast potential in the colours of Real Madrid.

The Brazilian was a brilliant support act to Ballon d’Or winner Karim Benzema, as the duo struck up a devastating understanding to fire Real Madrid to Champions League and La Liga titles.

The 22-year-old was directly involved in 42 goals across all competitions, scoring 20 of his own and creating 22 more. His most important came in the Champions League final as his winner sealed Real Madrid’s 14th European crown.

Among the most exciting young talents in the game right now, he is another who will expect to feature prominently in these rankings across the next decade.

The third of four Real Madrid stars to feature in the top ten, Thibaut Courtois underlined his status as arguably the world’s best goalkeeper last season.

Very honored to win this trophy! I would like to share this moment with all of you and to thank you for your unconditional support and love! #HalaMadrid

His 59 saves during the club’s continental triumph were also a Champions League single-season record, with the Belgian a deserved winner of the 2022 Yashin Trophy as Europe’s finest goalkeeper.

Kylian Mbappe finished just outside the top five, following another goal-laden campaign in the French capital. The Paris Saint-Germain forward arrived to a chorus of boos at the Ballon d’Or ceremony in Paris, following reports that he wants out at the capital club just months after penning a new deal.

Mbappe’s exit would be a major blow to PSG’s project given his brilliance in recent campaigns. The 23-year-old has won Ligue 1’s leading scorer accolade in four consecutive campaigns, including last season as he scored 39 goals in all competitions for PSG.

Those performances saw Mbappe named as Ligue 1 Player of the Year for the third successive season, equalling Zlatan Ibrahimovic’s record as a three-time winner of the award. He also finished as the leading assist provider in Ligue 1 last season as PSG were crowned champions.

Mohamed Salah was named in the Ballon d’Or’s top ten for a fourth consecutive ceremony, after starring for Liverpool during the 2021/22 campaign.

Salah ended the season as the Premier League’s leading scorer and assist provider, performances which earned the Egyptian a second PFA Player of the Year and FWA Footballer of the Year double, having also scooped both awards in 2017/18.

Salah scored 31 goals in all competitions as the Reds won a FA Cup and League Cup double, though he agonisingly missed out on more major prizes. The 30-year-old finished as runner-up in the Premier League, Champions League and Africa Cup of Nations, with those near-misses perhaps preventing an even higher placing.

Robert Lewandowski might just come to be remembered as one of the most unfortunate men not to win a Ballon d’Or.

The Poland forward seemed set to be coronated during the 2019/20 campaign after scoring 55 goals for a treble-winning Bayern Munich side, only to see the award cancelled due to the impact of the Covid-19 pandemic on the football calendar.

Last year he finished as runner-up to Lionel Messi, despite a season which saw him break Gerd Muller’s 49-year Bundesliga record after scoring an astonishing 41 goals in 29 league appearances.

Robert Lewandowski wins the Gerd Müller award which goes to the top striker of the year 🎯 pic.twitter.com/qmVY9o0Ssn

Lewandowski won a second successive European Golden Shoe in 2021/22 and scored 50 goals – ending the campaign as the Bundesliga’s top scorer for a seventh time – as Bayern retained the title. Winner of The Best FIFA Men’s Player award in 2020 and 2021, he missed out on a podium place at this year’s Ballon d’Or ceremony.

The 34-year-old signed for Barcelona during the summer and will hope the move to Spain will put him in a greater spotlight for this award. Each of the last 13 winners have been recognised largely for their performances in Spanish football.

De Bruyne has been a regular in shortlists for the award in recent seasons having cemented his status as one of Europe’s finest footballers. Last season the midfielder scored a career-best 19 goals in all competitions as City were crowned Premier League champions.

Had a great evening with my family. Very honoured to end up 3rd! Big congratulations to @Benzema 💪🏼 pic.twitter.com/LFne3r2wLk

He also provided 14 assists, including the cross for Ilkay Gundogan to score a dramatic winner and seal the title on the final weekend of the season.

De Bruyne has started the current campaign in brilliant fashion, with nine assists from nine league games. The Premier League’s single-season assist record (20) that he currently shares with Thierry Henry is in his sights.

Sadio Mane was named as runner-up for the Ballon d’Or following a successful season for club and country.

Mane became the first African footballer to place inside the vote’s top three since George Weah became Africa’s first, and so far only, winner of the Ballon d’Or in 1995.

Mane scored 23 goals in all competitions as Liverpool won the FA Cup and League Cup, including a brilliant two-goal performance in the semi-final win over Manchester City in the former. He was integral to the club’s run to the Champions League final, while the Reds also recorded 90+ points in a Premier League season for a third time in four campaigns.

The 30-year-old’s greatest triumph came on the international stage however, as he led Senegal to a first-ever Africa Cup of Nations triumph. Mane scored three goals and was named as Player of the Tournament, while he scored the decisive spot-kick in the shootout win over Egypt in the final.

He later inspired Senegal to World Cup qualification, as another shootout win over Egypt saw the
Lions of Teranga book their place in Qatar.

Benzema was the overwhelming favourite to win the Ballon d’Or and claimed the prize for the first time in Paris this week.

The 34-year-old scored 44 goals in 46 appearances for Real Madrid, as the Spanish side won the Champions League and La Liga in 2021/22.

He ended the campaign as the leading scorer in both competitions, with his performances in the Champions League outstanding. Benzema scored back-to-back hat-tricks in wins over PSG and Chelsea in the knockout rounds, before three goals across two legs eliminated Manchester City in the last four.

Benzema is the oldest Ballon d'Or winner in 66 years 🍷 pic.twitter.com/rOjioFHMOo

Benzema is the oldest winner of the Ballon d’Or since Stanley Matthews won the inaugural prize in 1956 and the first Frenchman to claim the honour since Zinedine Zidane in 1998. Zidane was at the ceremony to present the award to Benzema, who is the fifth French footballer to be crowned world football’s finest.