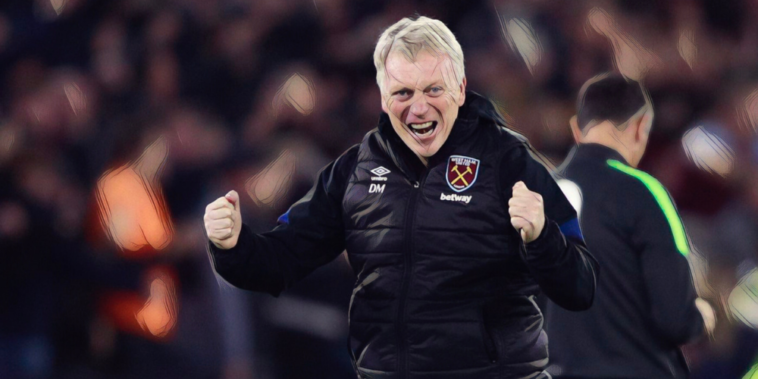 There were two managerial casualties following the latest action as Norwich and Aston Villa both opted for change, the former sacking Daniel Farke in the aftermath of the German’s first league win of the Premier League season.

Ole Gunnar Solskjaer has been linked with following that departed duo following a chastening derby defeat to Manchester City at Old Trafford, whilst West Ham continue to soar above expectations after beating Liverpool to move third.

Elsewhere Burnley frustrated Chelsea to earn a point at Stamford Bridge, whilst Antonio Conte’s return to the division ended in stalemate as a shot-shy Spurs played out a goalless draw at Everton.

What a season it’s turning out to be for West Ham and David Moyes, who have defied pre-season expectations that the Hammers would be unable to replicate last season’s achievement in securing European qualification.

West Ham are not only matching last season’s performances but bettering them, their 3-2 win over Liverpool this weekend moving Moyes’ men up to third and extending their best ever start to a Premier League season.

Just twice – in 1975/76 and 1980/81 – have West Ham ever earned more than their current 23 points from their first 11 fixtures of a league season (both 24 when adjusted to three points for a win) and their latest win was another example of how Moyes continues to get the most from his squad.

The Hammers’ strength in set-pieces has been well-documented and it was in such situations that the club exposed weakness in Liverpool, firing whipped deliveries in towards the goal-line with Alisson enduring a nightmare performance in goal.

Moyes has transformed the atmosphere and built a squad of players with energy and desire to bring success to the London Stadium, each having bought into a team-ethic with West Ham reaping the results.

Just where to start with the misery of Manchester United’s derby day performance?

United were passed off the pitch by a side belonging in an entirely different class, the Red Devils’ home humbling an indictment of just how far the once mighty have truly fallen.

The manner of the 5-0 drubbing at the hands of Liverpool was painful, though this was a misery of a different kind as City’s dominant side tormented their hosts by starving United of possession.

There was a 26-pass unbroken sequence in the build-up to Bernardo Silva scoring City’s second, a calamitous goal to concede as miscommunication and a lack of awareness provided the visitors with a lead they were never likely to relinquish.

14 – Manchester United are now without a clean sheet in their last 14 home games in all competitions – they've only had one longer run in their entire history without a home clean sheet, a 21-game run between April 1958 and March 1959. Porous. pic.twitter.com/dDsvnX6WJd

Ole Gunnar Solskjaer has regularly regurgitated nostalgic quips about the club’s yesteryears, but this was as far from Sir Alex Ferguson’s championship-winning sides as can be imagined – a side lacking direction and desire rolled over on home soil in meek fashion.

Manchester City’s seemingly endless passages of passing this weekend were the ideologies of their manager coming to fruition, dictating the entirety of their Manchester derby win at Old Trafford.

At the centre of a fine performance was Rodri, who has evolved this season into one of the finest holding midfielders in European football.

The Spaniard was not averse to criticism during the early period of his career at the Etihad, but having been tutored into the intricacies of operating in a Pep Guardiola midfield he has began to reach new levels during the current campaign.

The 25-year-old provided poise and physicality at the base of the City engine room, his positional excellence and confidence in taking possession and progressing the ball shining through against the Red Devils.

Guardiola has made no secret of his fascination of midfielders and Rodri’s improvement will no doubt have pleased his ever-demanding head coach.

Dean Smith’s reign as Aston Villa manager is over after the club pulled the trigger on his tenure, a fifth consecutive league defeat prompting a decision from the club’s hierarchy.

Smith’s side travelled to Southampton this weekend in need of a result, but the under-fire manager was let down by a number of poor performances with both Anwar El Ghazi and Leon Bailey guilty culprits.

The former was cautioned early and then somehow avoided a dismissal for a cynical challenge and dive inside the opening half an hour, whilst Bailey’s performance lacked desire as the winger left full-back Matty Cash exposed time and time again.

The Jamaica international was signed to add spark following the departure of Jack Grealish during the summer, but the 24-year-old’s continued failure to track back cost his side dearly and will not have impressed his new fanbase,

Aston Villa were interested in signing James Ward-Prowse during the summer and how the aforementioned Smith will have wished the midfielder was amongst his ranks on Friday evening, the England international producing a dominant performance.

Ward-Prowse hurtled into challenges and ran himself into the ground for Ralph Hasenhuttl’s side, a captain’s performance and one that continued the Saints’ recent momentum.

Mentions must also go to Oriol Romeu for his defensive work and a strong showing from Adam Armstrong, the latter scoring just his second Premier League goal since arriving from Blackburn with a wonderfully-hit winner at St Mary’s.

Our preview of the Premier League weekend detailed how Brentford headed into their clash with Norwich as an example for promoted sides, having been rewarded for their ambition with a strong start to the campaign.

The Bees’ home defeat to the winless Canaries has altered that sentiment somewhat, however, extending their run to four consecutive league defeats since October’s international break.

Back-to-back losses to Burnley and Norwich – both without a win before meeting Brentford – have raised alarms and Thomas Frank will now hope to galvanise his flagging side during this month’s pause for international duty.

There’s nothing like a hefty price-tag to change perceptions within football, with players such as Harry Maguire and Kepa Arrizabalaga amongst the Premier League names to have seen each poor performance come alongside a mention of their cost.

Ben White’s difficult debut against Brentford in August brought a similar narrative, questions over Arsenal’s investment in the centre-back ever louder as the Gunners slipped to an opening day defeat.

White missed the following two fixtures before returning for the win at Norwich on September 11, since remaining an ever-present as Arsenal have compiled an eight-game unbeaten run to climb to fifth.

That run has contained five clean sheets including another shut-out against Watford this week, with White’s partnership with Gabriel having shown huge signs of promise in recent games.

The former was outstanding against the Hornets to lead his teammates for touches, passes, interceptions, blocks and clearances, whilst his confidence in possession – creating openings with drives forward – was the forward-thinking positivity Mikel Arteta had identified ahead of his arrival from Brighton.

It’s the curse of a goalkeeper that mistakes tend to be very costly, and even some of the finest shot-stoppers in world football are prone to the occasional bad day at the office.

Alisson’s bad days have proven spectacular previously and his sorry showing at West Ham was another he will be desperate to forget, the Brazilian international at fault for all three goals as Liverpool crashed to a first defeat of the season at the London Stadium.

Alisson is the second goalkeeper to score an own goal in the Premier League this season after Tim Krul against Man City.

It was his first touch of the game. pic.twitter.com/qLf2lkAoQY

The 28-year-old failed to command his area with confidence and a West Ham side strong at set-pieces punished his lack of presence, scoring twice from corners with Alisson all at sea.

The first was credited as an own goal to the Reds’ keeper, whilst he will also have been more than a little disappointed to see Pablo Fornals’ effort squeeze under his grasp for West Ham’s second.