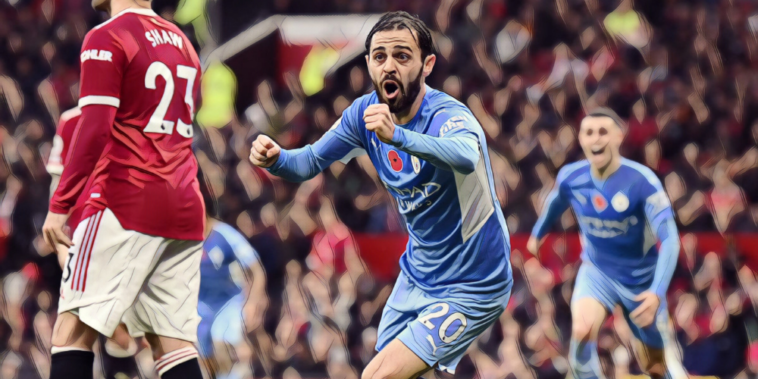 Each week we delve through the Premier League’s weekend action and compile our divisional Team of the Week, with the latest round of fixtures proving the end for managers at Aston Villa and Norwich.

Manchester City produced an impressive derby day performance to pile the pressure on Manchester United, with the Premier League champions closing the gap on leaders Chelsea after the west Londoners were held at home by Burnley.

Elsewhere, West Ham leapfrogged Liverpool into third after ending the Reds’ unbeaten start to the league campaign, whilst Antonio Conte’s first league game in charge of Tottenham ended in a goalless draw.

Norwich’s first win of the season was not enough to save Daniel Farke from the sack, but it has at least breathed new life into a campaign that has began in alarming fashion.

The Canaries secured a 2-1 win over fellow promoted side Brentford to end a winless run of 20 top-flight games, with goalkeeper Tim Krul twice coming to his side’s rescue with point-blank stops to deny Christian Norgaard.

The saves proved crucial as Norwich hung on to claim a precious three points on the road, a win that will raise faint hopes that the club can mount a genuine challenge for survival this season.

Reece James continued his excellent form this season during Chelsea’s 1-1 draw with Burnley, producing an impressive performance despite some disappointing displays from those around him at Stamford Bridge.

The 21-year-old was a constant menace in another eye-catching showing from the right-back, who claimed his third Premier League assist of the season with a pinpoint delivery for Kai Havertz to head home.

Reece James in the Premier League this season:

The assist was one of a number of fine deliveries from James, who has found career-best form in recent weeks to emerge as one of Chelsea’s most influential players.

Arsenal’s revival continued as the Gunners stretched their unbeaten run to eight league fixtures, moving just two points outside the Champions League places after beating a stubborn Watford 1-0 at the Emirates.

Emile Smith Rowe’s fine strike secured all three points, but it was the performance of Ben White that will offer the most encouragement for Arsenal, with the summer signing outstanding at centre-back.

Expectations have been heavy on White since his £50m arrival from Brighton, though the defender showcased what he can bring to Mikel Arteta’s side with a positive performance at the heart of the defence.

The 23-year-old led his teammates for touches (101), passes (81), clearances (6), blocks (3), and interceptions (2), whilst his confidence in driving forward in possession helped Arsenal break down a deep-lying Hornets defence.

West Ham rose to third in the division and maintained their brilliant start to the season with an entertaining 3-2 win over Liverpool on Sunday, moving above the beaten Reds after ending the visitor’s unbeaten record.

The Hammers’ well-documented strength at set pieces exposed Jurgen Klopp’s side, with Zouma heading in the crucial third after Alisson misjudged the flight of Jarrod Bowen’s in-swinging delivery.

Zouma’s goal was the highlight of another strong showing from the summer signing, who has made himself an instant fans’ favourite at the London Stadium following his arrival from Chelsea.

The France international made a number of impressive challenges and demonstrated his adaptability after swapping from right to left centre-back after Angelo Ogbonna’s injury.

Manchester City’s dominance at Manchester United was embarrassingly emphatic for the home side, with Pep Guardiola’s team recording 753 passes at Old Trafford – the most ever recorded against United in the Premier League since the data was first collected in 2003/04.

City’s ability to control of opponents is a result of stacking their side with a wonderful collection of gifted footballers, including a full-back in Joao Cancelo that could reasonably operate as a number 10 if required.

Cancelo can quite literally do it all and made it five assists within the space of a week after creating both goals in City’s 2-0 win at Old Trafford, forcing an early own goal before floating a cross to the back post for Bernardo Silva to turn home.

João Cancelo for Man City in the Premier League this season:

The full-back that does EVERYTHING. pic.twitter.com/uxBRqHEwX3

The 27-year-old has been at the centre of City’s start to the season and leads his teammates for touches, passes, tackles, duels won, shots and interceptions amongst a number of wide-ranging metrics, with the all-action Cancelo amongst the most influential full-backs in world football.

Manchester City ruthlessly exposed the flaws in their cross-town rivals and the performance of Rodri underlined Manchester United’s desperate need for midfield reinforcements.

The Spaniard controlled proceedings from start to finish in a midfield masterclass for the champions, regaining, recycling and receiving possession at the base of City’s engine room and showcasing his passing range with a number of long passes out to the flanks.

United’s lacklustre midfield could not get close to the 25-year-old, who continued an excellent start to the campaign with another stand-out showing and reemphasised his status as one of Europe’s best defensive midfielders on current form.

Crystal Palace fans called for their club to sign Conor Gallagher on a permanent basis during the Eagles’ 2-0 win over Wolves this weekend, the midfielder again outstanding as Patrick Vieira’s side continued their fine recent form.

Gallagher scored his side’s second with the help of a fortuitous deflection, but it was a moment the 21-year-old deserved after another performance of infectious energy and enthusiasm.

👏 Conor Gallagher has had a direct hand in more #PL goals than any of his @CPFC team-mates this season (4 goals, 2 assists)#CRYWOL pic.twitter.com/2UYmpiy6FM

The Chelsea loanee has rapidly become one of the signings of the season and has helped transform Crystal Palace into a team that is now realistically looking towards the European places, helping alleviate some of the burden on Wilfried Zaha and providing endless drive from midfield.

Overlooked for the England squad for November’s World Cup qualifiers, he will be difficult to ignore for both Gareth Southgate and Thomas Tuchel if he maintains the standards currently being set.

Fornals produced a superb showing as West Ham beat Liverpool in the capital, the midfielder covering every blade of grass in a performance of hard-running and pressing.

The Spaniard’s graft was mixed with a quality in attacking areas, including a whipped early corner that found its way into the Liverpool net for the game’s opening goal, via the gloves of goalkeeper Alisson.

The 25-year-old then showed composure to net West Ham’s second on the break, squeezing his effort under Alisson after being threaded through following some fine work by Jarrod Bowen.

Zaha scored for the second successive week as Palace beat a Wolves team on a run of momentum, rolling a fantastic finish beyond Jose Sa to open the scoring.

The Ivorian has often had to shoulder the weight of expectation in this side, though the increase in attacking quality around Zaha can bring the best from him this season, as the likes of Gallagher and Odsonne Edouard take away some of the focus previously centred on Palace’s talisman.

There’s been a lot of love for Bernardo Silva on these pages in recent weeks and rightly so, the Portugal international enjoying a stunning season for Pep Guardiola’s side.

From unsettled star to the beating heart of the champion’s side within a matter of months, Bernardo continued his excellent start to the campaign – and emphasised his status as a big-game player – with a delightful derby day performance at Old Trafford.

Bernardo worked tirelessly in a false nine position with City following his lead in the press, whilst he reaped the rewards of his endless effort after scoring his side’s second – his third away goal at Manchester United.

Is there a midfielder in the world better than Bernardo Silva right now? 🤩 pic.twitter.com/jvy5sHkpGU

Graeme Souness eulogised about Bernardo following his performance and claimed any side in world football would love to have the midfielder amongst their ranks, labelling the 27-year-old as ‘an absolute dream of a player’.

It’s an assessment that is difficult to disagree with.

Southampton made it three wins from four games after beating Aston Villa on Friday evening, the difference between the sides a wonderful early goal from Adam Armstrong.

The summer signing has failed to find the goals his efforts have deserved so far this season, but his sweet strike – lashed home with conviction from the edge of the area – was a reminder of the forward’s ability to conjure something from nothing.

30 – Since the start of last season, Adam Armstrong is one of only two English players to score 30+ league goals in England's top two divisions (excluding play-offs), along with Ivan Toney (33). Finisher. #SOUAVL pic.twitter.com/x14xY1tpiD

Armstrong’s goal was the highlight of a performance in which his work-rate and movement caused problems for Villa all evening, a display which indicated the 24-year-old is beginning to find his feet at Premier League level.

Read Also – Opinion: Antonio Conte is betting on himself at Tottenham Hotspur