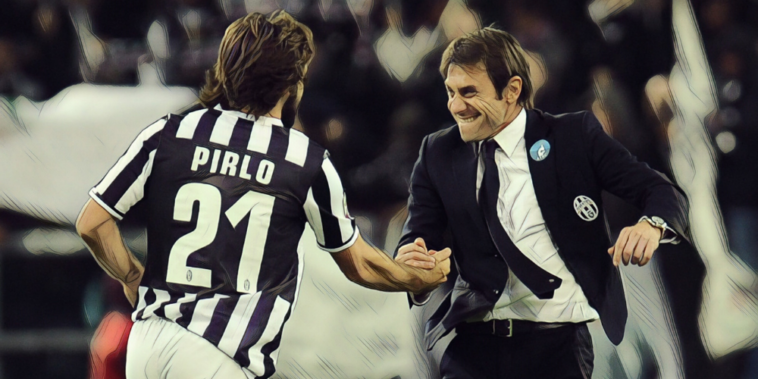 Antonio Conte is back in the Premier League after being named as manager of Tottenham, the North London side turning to the serial winner in a bid to revive their faltering fortunes.

Conte arrives with a reputation as one of world football’s finest coaches and will look to extract more from a talented squad in the capital, having won five top-flight league titles during spells at Juventus, Chelsea and Inter Milan.

Those tenures have seen Conte manage a whole host of leading names and following his return to English football we’ve compiled a dream XI of the best players to have played under the Italian.

Gianluigi Buffon was into the twilight of an incredible career upon Conte’s arrival at Juventus, though continued to flourish under the guidance of his former teammate as the Bianconeri returned to the summit of Italian football.

Buffon won three consecutive league titles under Conte, including a historic undefeated season during the 2011/12 campaign in which the goalkeeper set a new Serie A record of 21 clean sheets.

Twice named as the division’s best goalkeeper during his time working under Conte, one of the game’s goalkeeping greats edges out Thibaut Courtois for our number one position.

Hakimi spent just one season under Conte’s management but proved an integral figure in Inter Milan’s 2020/21 league title success, scoring seven goals and providing 10 assists in all competitions from his position at wing-back.

The Moroccan’s blistering speed, energy and attacking quality made him the perfect player to operate in a Conte system, with Hakimi’s departure to Paris Saint-Germain – as a result of Inter’s concerning finances – contributing to Conte’s decision to leave the San Siro.

Italian football has a long tradition of producing elite defenders and Leonardo Bonucci has been amongst the finest of his generation, a towering presence during Juventus’ period of domination in Serie A.

Bonucci signed for Juventus shortly before Conte’s arrival as head coach and evolved into one of Europe’s best centre-backs under his compatriot’s guidance, winning three league titles in succession and starring in the team that earned a record 102 points in 2013/14.

Bonucci has rarely been found far from his centre-back partner in crime across the past decade, with Georgio Chiellini having also proven a pillar of defensive resistance for both club and country.

Bonucci and Chiellini trail only the aforementioned Buffon for Serie A titles (10) with nine each, having been integral members of Juventus’ dominant run of consecutive Scudetto successes, set in motion by Conte’s hat-trick of title wins.

Chiellini is a defender’s defender, one who takes immense pride in frustrating forwards and who has mastered his craft during a lengthy career at the elite level of European football.

Even into the latter stages of his career the 37-year-old remains amongst the best, forming the backbone of the Italy side that emerged triumphant at Euro 2020.

Cesar Azpliciueta has been amongst Chelsea’s greatest servants of the Premier League era, a determined defender who has shone in various roles across the back four.

From featuring at full-back on either side of a back four, to being stationed as a wing-back, or as part of a three-man central defence, the Spaniard has rarely let the west Londoners down and was an ever-present during Conte’s title-winning season at Stamford Bridge.

Azpilicueta failed to miss a single minute as Conte’s team claimed the Premier League title in 2016/17 and remains a reliable presence for the current Chelsea side, having made 442 appearances for the Blues since his arrival into English football.

Andrea Pirlo’s signing for Juventus was arguably the catalyst behind the club’s success under Conte, his free transfer arrival one of the best bargains in Serie A history.

Pirlo’s talents were no secret following a glittering career at AC Milan, but the Rossoneri’s view that the midfielder was disposable proved Juventus’ gain in spectacular fashion.

Orchestrating the side from his regista role, Pirlo was named as Serie A Footballer of the Year in three consecutive campaigns, his creative influence leading Juventus to three successive titles under Conte.

He finished as the leading assist provider in the division during the first of those seasons and spent four campaigns in Turin, collecting a Serie A winners’ medal in each season.

N’Golo Kante became one of Antonio Conte’s first signings as Chelsea manager, the Italian securing a deal for the midfielder following his role in Leicester’s shock title success the previous season.

Kante became the first player to win back-to-back Premier League titles with different clubs following an outstanding first season at Stamford Bridge, being named as the PFA Player of the Year after helping Conte’s side to the championship.

The France international has since established himself as one of the finest midfielders of his generation in recent campaigns, adding both the World Cup and Champions League to an extensive collection of silverware.

Arturo Vidal’s arrival at Juventus in 2011 provided Antonio Conte with a formidable midfield contingent, arriving in the same summer as the aforementioned Pirlo to provide the engine room drive of Conte’s title-winning sides.

The Chilean proved a brilliant addition during four seasons at Juventus, making 171 appearances and scoring 48 goals in addition to winning four consecutive Serie A titles.

Amongst the most complete box-to-box players in world football at his best, Vidal influenced proceedings at both ends of the pitch in a combative and creative role.

Having won league titles with Bayern Munich and Barcelona upon leaving Turin, the midfielder reunited with Conte at Inter Milan and made 23 league appearances as the Nerazzurri were crowned Serie A champions in 2020/21.

Eden Hazard was amongst the star names of Chelsea’s successes under Conte, including a sparkling 2016/17 season in which the brilliant Belgian scored a career-best 16 Premier League goals.

Hazard also scored the winning goal as Conte’s Chelsea beat Manchester United to win the FA Cup in 2018, the winger having often provided the x-factor for the west Londoners across his seven seasons in the Premier League.

Hazard won six major trophies and scored 110 goals in all competitions for Chelsea, being named as the PFA Player of the Year during the club’s 2014/15 title-winning season under Jose Mourinho.

Conte signed Carlos Tevez at Juventus following a colourful Premier League career for the Argentine, who won three league titles and the Champions League across spells on either side of the Manchester divide.

Tevez made an instant impact in Turin to become a firm fans’ favourite at Juventus, scoring 21 goals in all competitions as the Bianconeri were crowned champions in Conte’s final season in charge.

Carlos Tevez dribbles them all 👟⚽️

The forward bettered that total the following season despite Conte’s departure, scoring 50 goals in just 95 appearances across his two seasons with Juventus, winning successive league titles and reaching the Champions League final in 2015.

Conte has managed some leading forwards during his managerial career so far and will be hoping Harry Kane can be the latest striker to fire his side towards silverware.

The signing of Romelu Lukaku proved the difference in taking Inter Milan back to the top of Italian football, with the Belgium international enjoying the best period of his career under Conte at the San Siro.

Lukaku became the fastest player in history to score 50 goals in all competitions for the Nerazzurri, netting 64 times in just 95 appearances for Inter Milan before leaving for Chelsea last summer.

That haul included 24 league goals as the club were crowned champions last season, with Lukaku named as the league’s Most Valuable Player in a campaign which also saw the 28-year-old rank second in the division for assists (11).

Read – Opinion: Antonio Conte is betting on himself at Tottenham Hotspur