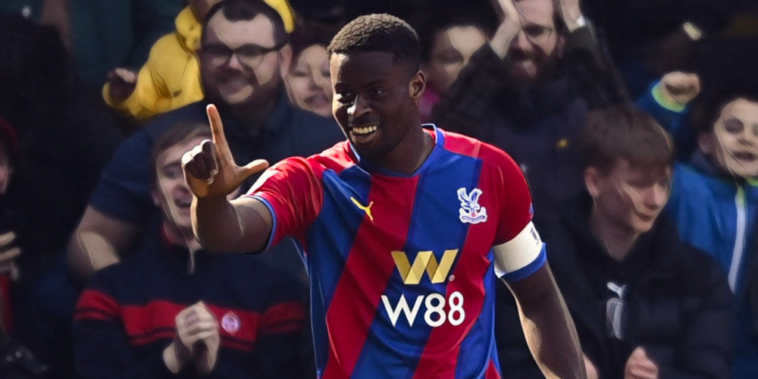 Following the latest round of FA Cup action, we pick out some of the heroes and villains from the best and worst of the weekend fixtures.

Manchester City, Chelsea, Liverpool and Crystal Palace are the final four in this season’s FA Cup, as the quartet all secured wins to book semi-final showdowns at Wembley.

Chelsea eliminated giant-killers Middlesbrough with a 2-0 win at the Riverside, whilst Manchester City made comfortable work of a tricky tie at Southampton to progress.

Crystal Palace were the weekend’s most impressive performers after thrashing struggling Everton, whilst Liverpool left it late – and rode their luck – to beat Nottingham Forest.

Here are our heroes and villains from the FA Cup quarter-final fixtures.

Mason Mount made both goals as Chelsea secured their passage to the semi-finals with a 2-0 win at Middlesbrough, as the west Londoners seek to reach a third consecutive FA Cup final.

Mount’s movement proved a problem for the Championship side throughout and the England international is often at the heart of Chelsea’s best performances.

It’s now four assists and a goal in his last four starts for Chelsea, whilst Mount’s brace of assists at the Riverside made it 20 goal involvements in all competitions this season. Back in the side and back to his best, he will a major role in the conclusion to Chelsea’s season.

An honourable mention must go to the flawless Thiago Silva who, at 38, failed to put a foot wrong and remains one of the best centre-backs in the business.

Everton are in a dire situation and their 4-0 humbling at Crystal Palace was a new low in a season full of disappointments.

Michael Keane has endured a chastening campaign and after an improved showing against Newcastle in midweek he was back to the error-prone performances that have plagued his season.

Keane formed part of an Everton side cut apart at Selhurst Park and the centre-back must share blame for each of the opening two goals, first allowing Marc Guehi to rise unmarked and head in the opener.

Keane had earlier missed a golden chance of his own in the early stages and the struggling centre-back could be near the top of the list for an anticipated clear out at Goodison Park this summer.

What a week it’s been for Marc Guehi, who followed a first inclusion in the England squad with the opening goal in Crystal Palace’s 4-0 win over Everton.

Patrick Vieira has done a fine job in reconstructing the Eagles squad this season and the Frenchman’s faith in young talent has been rewarded with a number of strong performances, both Guehi and Conor Gallagher involved with the Three Lions for the upcoming internationals.

Guehi has captained the side in recent weeks and at just 21-years-old is fast maturing into a centre-back of huge quality, the upcoming international break providing the youngster with a chance to stake his claim in an area of the pitch that has been uncertain for England.

First #ThreeLions call up ✅
Goal in the @EmiratesFACup ✅

Not a bad few days for Marc Guéhi!

He has become the the sixth player from the victorious U17 World Cup team of 2017 to get a call from the senior squad and the £18m arrival looks like a shrewd signing from Vieira and his team.

Guehi will get the chance to take a promising season to the next level when Palace take on former side Chelsea in the FA Cup semi-finals next month.

“I don’t have a magic wand to get inside people’s heads and change resilience across the whole squad. That’s a work in progress,” Lampard said after Everton’s 4-0 battering at Crystal Palace.

“This is a quarter-final today to get to Wembley and if you haven’t got the confidence to play, you can quickly flip it and say, have you got the b******* to play?”

Frank Lampard questions his players after a 4-0 loss to Crystal Palace in the FA Cup 👀 pic.twitter.com/el8jYq2TcL

It was a critical analysis of his side’s mentality after a humiliating quarter-final defeat in South London, one which extended Everton’s miserable away record in all competitions this season.

Lampard has not been helped by a squad of players underperforming and void of confidence, but there will no doubt be concerns at the lack of improvement since his arrival as Rafael Benitez’s replacement.

The loss to Palace was a capitulation in the capital and Everton’s record in away games under Lampard now reads: Four games, four losses, one goal scored and 14 conceded.

Time is running out for the new manager – still visibly unsure on his best side or system – to turn around the fortunes of a side in a desperate situation once the Premier League resumes next month.

Nottingham Forest were the last Football League side remaining in the FA Cup and gave a good account of themselves in a narrow 1-0 loss to Liverpool at the City Ground.

Joe Worrall has been integral in the club’s rise under Steve Cooper this season and was a colossal presence at the back for the Championship side, winning six duels, four tackles and making four clearances.

Gave his all. #EmiratesFACup pic.twitter.com/D3ZzqXs9ie

The centre-back’s recovery run and tackle to stop Diogo Jota in the first half was outstanding and he will hope to take momentum from this showing into Forest’s push for promotion.

Should their bid fail, it would be little surprise to see Premier League’s sides sniffing around a defender who has made notable strides at the City Ground.

Southampton were up against it against Manchester City in the last eight, but having twice held the Premier League champions in league action this season there was cautious optimism.

Ralph Hasenhuttl’s side were in the contest for much of the opening exchanges, but two poor errors from centre-back duo Jack Stephens and Mohammed Salisu handed City the initiative.

At this level, and against this opponent, basic errors are ruthlessly punished.

Raheem Sterling returned to the side and opened the scoring against Southampton this weekend, providing Pep Guardiola with a reminder of the qualities he can bring to the Manchester City side.

Sterling remained an unused substitute as City played out a goalless draw with Crystal Palace last week, a strange situation as Guardiola refused to make changes.

Speaking after the win at Southampton, Guardiola insisted he has complete faith in Sterling, but admitted the competition for places at the Etihad makes his team selections difficult.

“I didn’t have any doubt about him,” Guardiola said on Sterling.

“But at the same time I have Jack [Grealish], Phil [Foden], Riyad [Mahrez] – you saw the minutes Riyad played that the impact on the team was massive, the quality for many things. But Raheem deserves the best. I’ve said many times what we have done this season could not be possible without Raheem.

“He’s an important player but we have never had this amount of quality, the huge talent we have up front.”

Sterling will have just a year remaining on his contract this summer and has suggested he will leave if he is not a regular at the club, and an impressive performance against the Saints – in which he was his side’s biggest threat and should have scored more – has improved his chances of a regular return to the starting side.

Alex Oxlade-Chamberlain could not hide his frustration after being substituted during Liverpool’s 1-0 win at Nottingham Forest, the midfielder one of several changes as Jurgen Klopp turned to his bench at the City Ground.

Oxlade-Chamberlain has endured a frustrating season and has failed to make the most of the opportunities that have come his way, his latest showing underwhelming as he failed to make a tangible contribution to the game.

The 28-year-old’s chances have often come in a rotated side and it has prevented the midfielder from finding his rhythm, with time running out for Oxlade-Chamberlain to prove he can be a part of Liverpool’s plans.

His visible frustration was as likely down to his own performance as much as Klopp’s decision to substitute him and a parting of ways is looking increasingly likely given how his career has stalled.