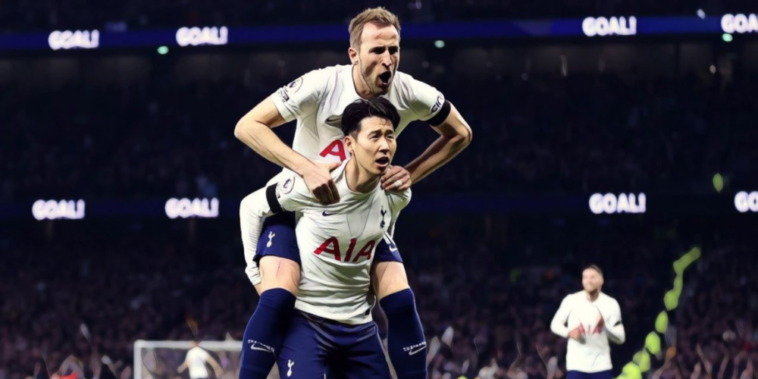 Each week we delve through the Premier League action and compile our divisional Team of the Week, with just four fixtures taking place this weekend due to the FA Cup quarter-finals.

Tottenham boosted their hopes of a top four finish and Champions League football after beating West Ham, though Arsenal remain the team to catch after the Gunners won 1-0 at Aston Villa.

Elsewhere Leeds came from two goals down to win a thrilling contest at Wolves, whilst stunning strikes from Timothy Castagne and James Maddison earned Leicester the points against Brentford.

Returning to the side for his first Premier League start since August, Leno was a solid presence in the absence of Aaron Ramsdale as Arsenal secured a 1-0 win at Aston Villa.

The Germany international had little to do during the opening half, but was reliable when called upon in the second and made a fine save to deny Philippe Coutinho’s effort with the last kick of the game.

That save sparked congratulatory celebrations from his Arsenal teammates, who saw Leno come in from the cold to help continue the club’s push for Champions League football.

It’s been a frustrating season for the 30-year-old who will surely move on at the end of the season and become a regular number one.

Leeds secured another vital win with a thrilling 3-2 win at Wolves, coming back from two goals down at half-time to beat Bruno Lage’s side at Molineux.

Luke Ayling scored the dramatic 91st-minute winner for Leeds who capitalised on the sending off of Wolves’ Raul Jimenez to turn the game around, the full-back keeping his composure inside the box to emerge as the unlikeliest of match-winners.

You couldn't write this! 🤯

Luke Ayling grabs the winner in the 91st minute 😲 pic.twitter.com/seaEYKs78a

Ayling had struggled during the first half but improved as the game went on, finding himself involved in the equaliser before his persistence and determination led to a crucial winner.

Ben White will head into the international break with ambitions of breaking into the England side, having been in fine form for Arsenal in recent weeks.

White produced another strong performance as the Gunners won at Aston Villa this weekend, containing the threat of Ollie Watkins and ensuring Arsenal held on amid late pressure from the hosts.

Arsenal have now won 17 of the 24 games that White and Gabriel have started together in the Premier League, keeping 12 clean sheets in the process.

Having become a central figure in a revitalised Arsenal this season, the 24-year-old will now hope for a chance to stake his claim with England. On current form, he deserves an opportunity to do so.

Cristian Romero has settled well at Tottenham and was excellent in the club’s win over West Ham, coming out on top in his duel with Michail Antonio.

Antonio has proven a menace for Premier League centre-backs in recent seasons, but the Hammers forward found himself on the receiving end of some tough treatment from Spurs’ combative Argentine and was subbed before the hour.

Romero won four duels, three tackles and made three clearances in Spurs’ 3-1 win, a result which keeps the club in pursuit of North London rivals Arsenal and a top four finish.

Conte has called on Romero to keep his focus as he bids to reach the next level, but the 23-year-old has shown this season that he has all the attributes to develop into one of the division’s best defenders.

Timothy Castagne returned to the Leicester side this weekend after a spell on the sidelines and the full-back celebrated his first Premier League appearance since December with a brilliant goal to open the scoring.

There was no doubt rust to shake off for the Belgian and he was caught out on occasion by Brentford, but Castange’s willingness to charge forward and join in the attack adds a welcome option for Brendan Rodgers.

It hasn’t been easy but it feels 𝙄𝙉𝘾𝙍𝙀𝘿𝙄𝘽𝙇𝙀 to be back! 🤩🦊 pic.twitter.com/ZyVnFQvIdL

His goal, just his third since since joining from Atalanta and struck into the top corner from outside the area, moved Leicester into the top half. With a European quarter-final still to come, there is time to salvage what has been a challenging campaign for the Foxes.

Thomas Partey is enjoying the most consistent period of his Arsenal career so far and was again impressive in the Gunners win at Aston Villa.

Partey is a smooth operator in midfield and has the composure and technique to navigate his way through congested situations, with the Ghana international’s presence having added to the spine of a side closing in on Champions League football.

It’s taken time for Partey to reach these levels, but he is now dominating midfields in the manner Arsenal expected upon his arrival.

The January addition from Juventus is becoming increasingly influential at the base of the Tottenham midfield, with Bentancur composed and creative in possession against West Ham.

The Uruguay international completed 95% of his passes and regained possession on nine occasions, whilst he completed 100% of his dribbles including an audacious pirouette on the edge of his own box which left two West Ham players in his wake.

Antonio Conte was critical of Spurs’ transfer window and whilst the depth of his squad was reduced with a number of exits, there’s signs on the early evidence that the arrivals of Bentancur and Dejan Kulusevski have increased the quality levels.

Dewsbury-Hall was an impressive performer during Leicester’s 2-1 win over Brentford, with Brendan Rodgers giving the midfielder given a licence to get forward and influence to game.

His end product was missing on occasion, but the 23-year-old drove into promising positions and his hard-running and pressing were important for the Foxes throughout.

After learning his trade with lower-league loans, he is enjoying a breakthrough season at Leicester and has stated his case for a central role in Rodgers’ rebuild at the King Power Stadium.

Arsenal’s biggest threat once again as he proved a thorn in Aston Villa’s side this weekend, with Saka scoring the game’s only goal to secure the Gunners a crucial three points in the Midlands.

Saka gave Ashley Young a torrid time throughout and despite finding himself on the receiving end of some tough treatment from the hosts, dusted himself down to keep driving Arsenal forward.

Back to winning ways ! 🔥
My knees though🤕🤣 pic.twitter.com/v3ixgGSyAS

It’s now ten goals for the season for Saka in all competitions and the 20-year-old took his winner this weekend in fine style, drilling in a low effort from the edge of the area.

Involved in all three goals as Spurs continued their push towards the Champions League places, first forcing Kurt Zouma’s early own goal before his effort deflected off the same player to double the North Londoner side’s advantage.

The combination of Kane and Son can fire Antonio Conte’s side towards the top four this season and the familiar duo dovetailed again to take the game away from West Ham.

Too good for the Hammers. 🤪 pic.twitter.com/I1DYZt3BWa

Son raced onto Kane’s flick to score his second and put the result beyond doubt, moving to 13 goals in the Premier League this season. Only Mohamed Salah has scored more than the South Korean.

Both managers were gushing in their praise for Harry Kane after Tottenham’s 3-1 win over West Ham, with Antonio Conte hailing the forward as “two players in one – a No 10 and a No 9” as he dropped deep to create chances.

David Moyes called Kane ‘world class’ as he helped himself to three assists for Spurs, demonstrating his ability to change games without finding himself on the scoresheet.

Great feeling! Back to back wins at an important time. Big push after the international break 💪 pic.twitter.com/adhrQIu03w

Kane has now provided more assists (19) than any other Premier League player since the start of last season, a period in which he has also scored 35 goals. The complete centre-forward.