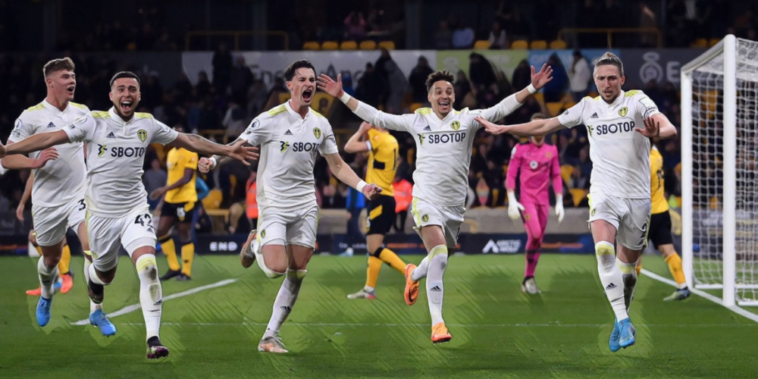 How about that for a comeback at Molineux? Leeds were dead and buried at half-time after finding themselves two goals down at Wolves, but roared back to claim all three points and pull further clear of the Premier League’s relegation places.

In a bizarre and breathless encounter that had no shortage of drama, Jesse March’s side secured their second successive win to move seven points clear of the bottom three.

Wolves led 2-0 at the interval following goals from Jonny Otto and Francisco Trincao, but Leeds – spurred on by Raul Jimenez’s red card for the home side – fought back through goals from Jack Harrison and Rodrigo, each coming in somewhat chaotic fashion.

You couldn't write this! 🤯

Luke Ayling grabs the winner in the 91st minute 😲 pic.twitter.com/seaEYKs78a

Luke Ayling completed the comeback in stoppage-time after emerging as an unlikely match-winner, firing home to give an incident-packed occasion a fitting finale.

Tottenham remain in the chase for Champions League football after beating West Ham, a creative performance from Harry Kane inspiring the side to a 3-1 win against their London rivals.

Antonio Conte’s side have been frustratingly inconsistent in recent weeks but made it back-to-back Premier League wins with an impressive performance this weekend.

Kane was at the centre of their success and involved in all three goals, first forcing Kurt Zouma’s early own goal with a low cross into the area.

Kane continued to pick out passes for the Son Heung-Min and a familiar combination delivered once again soon after, a brilliant cutting pass from the England captain releasing Son in behind to score Spurs’ second.

Harry Kane has provided more assists than any other Premier League player since the start of last season:

Son raced away in the second half to score his second after Kane’s flick, as the 28-year-old finished the game with three assists. Kane has now provided 19 assists in the Premier League since the start of last season, more than any other player.

Spurs face a fight to secure a top four finish and Champions League football, but in Son and Kane the club have two elite talents – and the goals – to push hard until the end of the season.

James Maddison has developed a reputation for spectacular strikes from distance and the Leicester midfield produced another memorable moment this weekend, curling home a postage-stamp free-kick into the top corner against Brentford.

Maddison has now scored more Premier League goals from outside the box than any other player since signing for Leicester in 2018 (13), overtaking Southampton midfielder James Ward-Prowse.

One stunning goal deserves another… 💫@Madders10 pulled another glorious free-kick out of the hat in #LeiBre 🎩 pic.twitter.com/kAWbuWHj7q

His goal also continued his fine record around goal this season with the 25-year-old having scored 13 goals and provided seven assists across all competitions in 2021/22, just one goal involvement short of the 21 he managed across the entirety of last season.

No English midfielder has been involved in more goals this season, though Gareth Southgate has overlooked Maddison once again for the upcoming internationals.

Back-to-back wins have propelled Leeds away from the Premier League’s relegation places, with both victories coming from last-minute winners.

After Joe Gelhardt snatched the points against Norwich last weekend, it was the turn of Luke Ayling to prove Leeds’ hero and earn a valuable three points for Jesse Marsch’s side.

1 – @LUFC have won a Premier League match despite being 2+ goals behind at half-time for the very first time, previously losing 47/47 such instances. Undertaker. pic.twitter.com/U6lwy76Vos

Leeds’ win at Wolves was also the first time the club have come back from two goals down at half-time to win a Premier League fixture, having lost on all 47 previous occasions in which they had trailed by 2+ goals at the interval.

Steven Gerrard called on Bukayo Saka to toughen up after the winger’s complaints at Aston Villa’s physical approach this weekend, with the Arsenal winger finding himself on the receiving end of some tough treatment from the home side.

“He’s a good player, he’s an outstanding talent, I love him, but he can’t complain about that [physical] side. I’m sitting here now with screws in my hips, I’ve had about 16 operations and that’s all off the back of earning a living in English football.”

Gerrard, however, was unapologetic for the approach from his side and said Saka must learn to live with the demands that come with being a top talent in the Premier League.

It was a poor, and somewhat hypocritical take, from Gerrard towards one of the Premier League’s most exciting young players with the 41-year-old having previously called for better protection for his players whilst at Rangers.

Mikel Arteta discussed the dangers of Philippe Coutinho ahead of Arsenal’s trip to Aston Villa, but the Gunners found a way to nullify the Brazilian in their 1-0 win at Villa Park.

Coutinho struggled to get into the contest as he found space limited in midfield, with Thomas Partey and Granit Xhaka suffocating the space in which the 29-year-old prefers to operate.

After a brilliant beginning to his loan spell with Aston Villa, this was an anonymous showing from Coutinho and Steven Gerrard will need his side’s creative catalyst back to his best as the club pursue a top eight finish this season.

Having scored three goals and provided three assists in his four previous home games for Villa, this was a below-par performance from the winter window arrival.