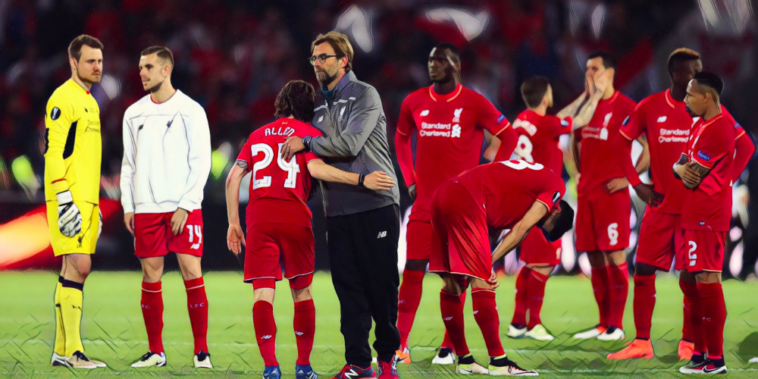 Jordan Henderson has recalled how Liverpool’s defeat in the 2016 Europa League final was the start of ‘something special’ for the club.

Liverpool face Villarreal in the Champions League semi-finals on Wednesday evening, as the Reds look to progress to a third final in just five seasons.

The Spanish side have upset the odds to reach this stage and are under the management of Unai Emery, who was in charge of the Sevilla team that defeated Liverpool in the final of the Europa League in 2015/16.

That loss came during Klopp’s first season in charge at Anfield as the Reds crashed to a 3-1 defeat, though Henderson has revealed how the German galvanised the squad with a sense of togetherness in the aftermath of their final disappointment.

“That night always sticks out,” he told the Guardian. “Because I remember after the game going back to the hotel and the lads were all very disappointed and just wanted to go back to their room, not see anyone and get their heads down. But the gaffer was different to what you expect. He got everyone together downstairs in the bar area and we all spent the night together.

“It felt as though he knew this was the beginning, the start of something special to come. As a player it is very difficult to think like that then when you’ve just lost a final but I always felt he was very different to anything I’d seen before.

“That night always sticks out in my mind: he sort of knew what was coming in the next few years. He has produced that and proven that was the beginning of something special.”

Henderson reflected on the impact Klopp has had across his time with Liverpool, with the club having since gone on to win both the Champions League and Premier League in recent seasons.

Klopp’s team are also in pursuit of an unprecedented quadruple of major trophies this season and Henderson believes the club’s Europa League final defeat was used to the Reds’ benefit moving forward.

“As soon as the manager came in he gave a lift to the whole club, the team, everybody really, but it is difficult when you lose a European final because you are so focused on that night because you have been so close,” Henderson said.

“I think the manager had a very good way of seeing the bigger picture and using that experience to our benefit going forward. His mentality was different, I felt he knew it was the start, and that confidence transcends to the players. It’s been pretty eventful since then so hopefully we can carry on going on in the right way. Tomorrow is a big night to continue going in the right direction.”