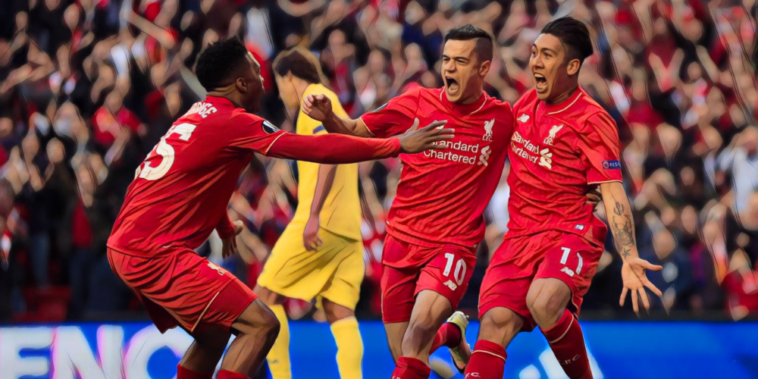 Liverpool face Villarreal in the semi-finals of the UEFA Champions League this week, a rematch of a European showdown between the sides during the 2015/16 campaign.

Jurgen Klopp was in his first season in charge at Liverpool, having arrived to replace Brendan Rodgers in October before leading the Reds to both the League Cup and Europa League finals.

Liverpool ended the season without silverware, but their Europa League semi-final second leg win over Villarreal was among the most memorable results of the campaign.

The Reds overturned a 1-0 first leg defeat to run out 3-0 winners at an atmospheric Anfield and ahead of the Champions League rematch between the sides we’ve looked back at the Liverpool XI involved.

Mignolet had little to do in the return leg at Anfield, but did well to get down and make saves from both Mario and Cedric Bakambu to deny the visitors.

The Belgian international spent six seasons at Liverpool but often struggled to convince and fell out of favour following Klopp’s first full season in charge.

The German signed Loris Karius as an initial failed replacement, before the world-record purchase of Alisson Becker placed the Reds in a far stronger goalkeeping position than the previous regime.

Nathaniel Clyne’s career with the club stalled amid fitness problems, but the right-back was a regular and reliable presence across his first two seasons at Anfield.

He made 52 appearances in all competitions during the 2016/17 campaign and impressed during the 3-0 win over Villarreal, with his first-time cross leading to the opening goal of the game.

Clyne made just 10 appearances for Liverpool in his final three seasons with the club after being plagued with injury problems, whilst the emergence of Trent Alexander-Arnold damaged his hopes of a return.

He signed for former side Crystal Palace on a free transfer in 2020 and remains a valued part of Patrick Vieira’s squad.

Lovren followed a well-trodden path from Southampton to Liverpool in 2014 and spent six seasons with the Reds, a period which contained a mixture of impressive defensive displays and some error-prone performances.

The win over Villarreal was one of the Croatian centre-back’s better showings as he led the backline in fine fashion, including making a brilliant crunching challenge on the half-way line that almost led to a goal.

Lovren made 185 appearances for Liverpool and played in both the Europa League and Champions League finals, but departed for Zenit St Petersburg after a sporadic role in the club’s 2019/20 Premier League title triumph.

Toure was included in the side ahead of Martin Skrtel, after Mamadou Sakho’s suspension for a doping violation – one which later saw him receive damages after a wrongful ban.

The Ivorian offered an experienced presence alongside Lovren and dealt well with the threat of Roberto Soldado as the Reds secured a clean sheet to reach the final.

The 2016/17 proved the final of Toure’s three seasons at Liverpool as he departed in the summer to link up with former manager Brendan Rodgers at Celtic.

Alberto Moreno could feature against Liverpool in Villarreal colours this week, having featured for the Reds against the Spanish side in 2016.

Moreno was his usual energetic self during Liverpool’s 3-0 win, providing his side with an outlet, but was fortunate to escape the conceding of a penalty for a challenge on Denis Suarez.

Moreno endured a nightmare performance as Liverpool lost to Sevilla in the final and his career with the club failed to truly recover, as Andy Robertson arrived in 2017 to become first-choice at left-back.

The Spaniard moved to Villarreal on a free transfer in 2019 and formed part of the team that won the Europa League last season, beating Manchester United on penalties in the final.

Emre Can returned to the side after injury and was a commanding presence at the base of the midfield, finding himself involved in the opening goal after threading a pass out to Nathaniel Clyne.

Imposing in the centre of the pitch, the German was an important figure in the early version of Klopp’s team but chose to leave Liverpool for Juventus on a free transfer in 2018.

Whilst the team he left behind has gone from strength to strength in his absence, Can’s career has somewhat stalled since a bright beginning and the midfielder is currently back in Germany with Borussia Dortmund.

James Milner captained the side in the absence of Jordan Henderson and was a stand-out performer against Villarreal, making five key passes in arguably his best game since signing from Manchester City on a free transfer the previous summer.

That deal has been one of Liverpool’s best acquisitions of the past decade with Milner having been an invaluable presence in recent seasons, offering leadership and versatility to Klopp’s squad.

He has made 284 appearances for Liverpool and won five trophies at Anfield, whilst he is one of just two players from this XI who remain a part of the set-up on Merseyside.

Jurgen Klopp was a huge admirer of Adam Lallana during his early reign at Liverpool, with the midfielder combining the technical talent and industry to thrive in the German’s gegenpressing system.

Lallana scored the third goal of the evening against Villarreal after turning in from close range, in a performance that saw the midfielder work hard at both ends of the pitch.

He scored eight Premier League goals the following season as Liverpool secured Champions League qualification, but struggled with fitness problems for the remainder of his career at Anfield.

Lallana departed on a free transfer for Brighton in 2020 after 178 appearances and 22 goals for Liverpool in all competitions.

Philippe Coutinho developed into one of the Premier League’s most influential talents under Klopp’s guidance, having been signed as a promising youngster during Brendan Rodgers’ time in charge.

The Brazilian scored 12 goals in all competitions during the 2015/16 season, including the club’s Goal of the Season accolade for an audacious finish against Manchester United in the Europa League’s last-16.

Coutinho ended the campaign as Liverpool’s Player of the Season and reached new levels over the following campaigns, eventually attracting interest from Barcelona and completing a £142m move to the Camp Nou in 2018.

He provided 99 G/A in 201 appearances for Liverpool and has since won major honours at Barcelona and Bayern Munich, before returning to the Premier League on loan at Aston Villa this season.

The midfielder was replaced on 82 minutes with Joe Allen introduced off the bench.

Arguably the best player on the pitch as Liverpool reached the Europa League final, the forward was a livewire in the sort of performance that would become synonymous with Firmino under Klopp.

Initially signed as a midfielder, Firmino developed into a hard-running false nine under the German’s guidance to become a key cog in his evolving side.

Against Villarreal he produced a wondrous moment of skill to bamboozle Roberto Soldado and in recent seasons has formed part of an iconic front three alongside Mohamed Salah and Sadio Mane.

Firmino – who was withdrawn in the 89th-minute for Christian Benteke – remains a valued member of Klopp’s plans and has scored 98 goals in all competitions for the club.

Daniel Sturridge scored the crucial second goal to put the home side ahead on aggregate, a highlight in a season that had been ravaged with fitness problems.

Sturridge struggled to replicate the electric form showed alongside Luis Suarez in 2013/14, but when fit provided moments of quality including a stunning goal in the final defeat to Sevilla.

He scored 68 goals in 160 appearances across his six-and-a-half seasons at Liverpool, winning the Champions League in his final campaign before a move to Turkish side Trabzonspor.

He was substituted in stoppage-time as Klopp ran down the clock, with Lucas Leiva introduced as his replacement.