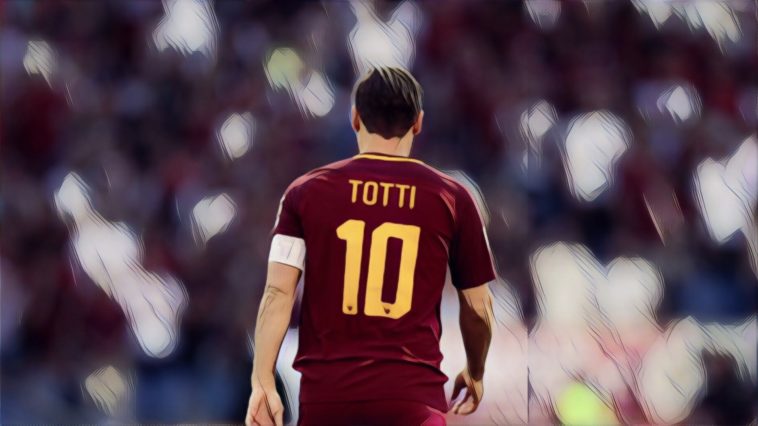 On September 27th 1976, Francesco Totti was first delivered to the eternal city of Rome and presumably he emerged kicking and screaming, and presumably the screaming was born of frustration because there was no ball to connect with.

Mention of the Italian legend’s birth immediately evokes one of his many nicknames – Er Pupone (The Big Baby) – that was bestowed on him as a pizza-loving teen for his chubbiness and because this arch fantasista in the making was always the youngest in every age-group he was promoted into as he seared through the Giallorossi ranks. There were other nicknames too. Lots of them, as befitting a player who can easily be considered one of the finest talents to ever grace the peninsula. Il Gladiatore. That’s an obvious one. L’Ottavo Re di Roma (The Eighth King of Rome). That’s a cool one.

So great – and often unique – were Totti’s achievements, spread across just shy of a quarter of a century, they require a deep breath to recite. But recite them we must, because his devoted loyalty to Roma for the duration of his career meant his greatness didn’t travel well.

Instead, we’ve marvelled at clips, a highlights reel awash with glorious strikes from range and a catalogue of dinked, clever lobs that seem to defy gravity and flatten their trajectory mid-air as he intended them to. We’ve watched a few games and appreciated and admired his artistry, craft that begins and ends with movement that can’t be taught.

We have recognised down the years in this country that Francesco Totti was special and brilliant.

And yet we didn’t, not fully. With Roma regulars in the Champions League but much less so beyond the last 16, his wispish, waspish scheming seemed to exist in a Serie A vacuum, and even there he was cast as a Le Tissier-at-Southampton-type-figure, a genius who punched up sometimes at the big clubs and marquee names. It is a surprise to learn that he represented his country on 58 occasions because there he was overshadowed also, by first Baggio, then Del Piero.

As significant and glamourous a club Roma undoubtedly is, the truth remains that had Totti been snapped up by AC Milan – as fate originally decreed – he would now be regarded across the world as one of the top five footballers our generation has produced. Not in the top 25. Not almost an after-thought when reeling off the very best we’ve seen. And that feels unfair.

Loyalty though comes at a price, and it was one Totti was always prepared to pay.

Materialising almost fully formed as a ferocious talent as a boy, displaying flicks and tricks perfected on the Via Vetulonia, in the heart of the ancient city, Totti was despondent to be overlooked by the club he so adored, but compensation lay in Milan’s interest, the Rossoneri keen indeed.

His mother, Fiorella, wasn’t having that though, and she approached Roma and in no uncertain terms told them so; of the mistake they were making and when it was rectified, a few years later he made his debut aged just 16, this strange kid who could do things no-one else could.

And here we arrive at those achievements, of which some are unprecedented, while others stagger.

During his 24 years of lighting and igniting the Stadio Olimpico, Totti guided them to an unforgettable Scudetto at the turn of the century, a pivotal figure in a vintage side that also contained Cafu, Zanetti and the irrepressible Gabriel Batistuta. He twice won the Serie A Footballer of the Year merit. He twice was the league’s top assist provider.

There is also the small matter of winning the World cup with the Azzurri in 2006, Totti netting a 95th-minute penalty against Australia to take his country into the quarter-finals, while the final summation of his Roma output prompts a double-take. In 785 games he scored 307 goals, 250 of them in the league. That was as a deep-lying forward, or a playmaker, or occasionally a winger. In fact, the only player to top his tally was Silvio Piola, who was very much an out-and-out centre-forward, more so one who plied his deadly trade in an era when score-lines were silly as the norm.

In 2017, this Italian masterpiece retired, and so substantial was his life’s work that a wider world that had half-ignored it in the making finally paid due homage to its longevity and majesty. And ever since he has continued with his philanthropic endeavours, raising money for disadvantaged children, while working behind the scenes at Roma, the club he was born to play for. The club he would have died for.

Recently, Totti revealed he has sunk into the murky depths of depression following a messy divorce and he encouraged others to speak out.

Happy birthday Francesco. You were – and are – one of a kind, even if it took some of us a while to catch on.

Read – The King of Rome: Totti’s three greatest goals for AS Roma