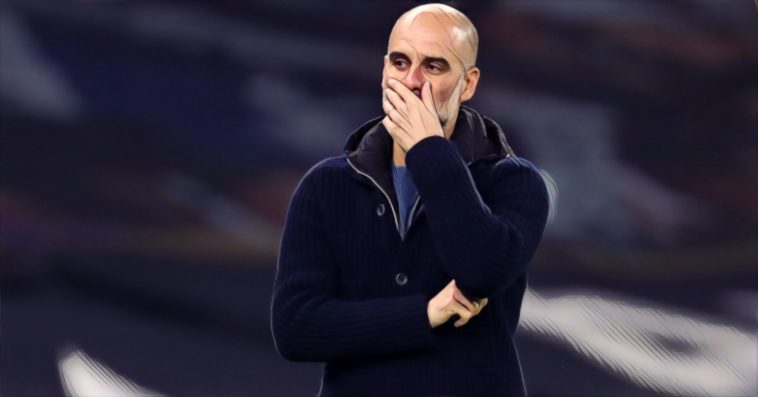 Pep Guardiola has denied that Manchester City’s Premier League rivals have worked his side out, despite admitting that they aren’t quite firing on all cylinders as yet this season.

Following their 2-0 defeat to Jose Mourinho’s Tottenham Hotspur side on Saturday, Man City are now languishing in mid-table after a below-par start to the season.

The 2018/19 title winners have picked just 12 points from their opening eight fixtures – the worst start to a season in Guardiola’s managerial career – after picking up just three wins and three draws, losing the other two.

After being blown away by a rampant Liverpool side in the title race last season, City would have hoped that their strong summer of recruitment would have put them firmly in the mix this year, particularly with the signing of highly-rated defender Ruben Dias.

Despite the Portugal international’s arrival helping to shore up a previously shaky backline, it’s been at the other end of the pitch where City have struggled, having only netted 10 times in the league so far this campaign – eleven less goals than league leaders Spurs have registered.

They have managed to find the back of the net regularly in Europe with nine goals from their three Champions League games so far this season, yet their inability to rediscover their usual free-flowing style domestically have led some to suggest that their top-flight rivals have begun to work them out, with City looking also particularly vulnerable on the counter-attack.

However, the City boss suggested his side were not under much threat at the weekend despite the end result and that it’s finding a more fluid attacking approach that will be the key to helping them improve.

“Do you think we change from the first season?” Guardiola responded at his pre-match press conference. “The first action was not a counter, they ran two times in 90 minutes and the second one they were brilliant. We conceded one, two counter-attacks, another was offside and no more.

“Aside from Liverpool, all teams defend so deep and we have to find a way to avoid but I don’t think counter-attacks are the big problem, I think the fluidity to attack is the target that we and I have to improve to know exactly what we have to do.”

City travel to Greece to face Greek side Olympiakos on Wednesday knowing a win will secure their passage to the knockout stages of the Champions League.