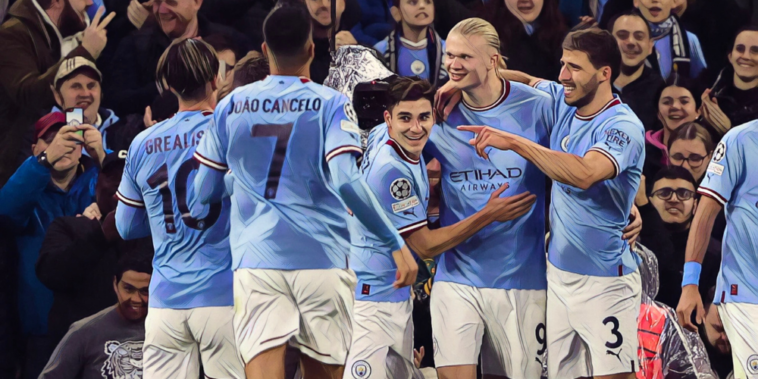 Pep Guardiola was delighted with Manchester City’s performance after his side thrashed Copenhagen 5-0 to maintain their perfect record in this season’s Champions League.

City made it three wins from three in the group to move a step closer to the knockout stages, following a convincing performance in which Erling Haaland scored twice at the Etihad.

Haaland’s double took him to 19 goals in just 12 appearances for Pep Guardiola’s side, with a David Khocholava own goal, Riyad Mahrez penalty and Julian Alvarez completing the rout.

“Tonight we see the reasons why the last years have been successful for this club,” Guardiola said. “After United, we were able to be humble enough to respect the opponent. This is the secret of this game. It was the work ethic.

“Yesterday we trained for 20 minutes and everyone was focused and paid attention. This is the reason why this season and seasons before with different players, every three days we are there.

“This is the biggest title we can get. Beyond the Premier League, Champions League… everything. This is the best.

“We played really well, the performance beyond the result was magnificent.”

Guardiola also discussed Kyle Walker’s abdominal injury after the right-back was substituted during the first half of City’s Manchester derby win last weekend.

The Spaniard confirmed that Walker will be out for ‘a while’ and raised doubts over whether the 32-year-old will be fit to feature for England at the World Cup.

“A while. I don’t know exactly but weeks. (It’s) Abdominal. It will be for a while.

“I don’t know. I can’t say anything else,” Guardiola added when asked if Walker’s World Cup place was in danger.

“Kyle will be a little bit out. Hopefully he can get it of course like Kalvin (Phillips), I know how important the World Cup is.”