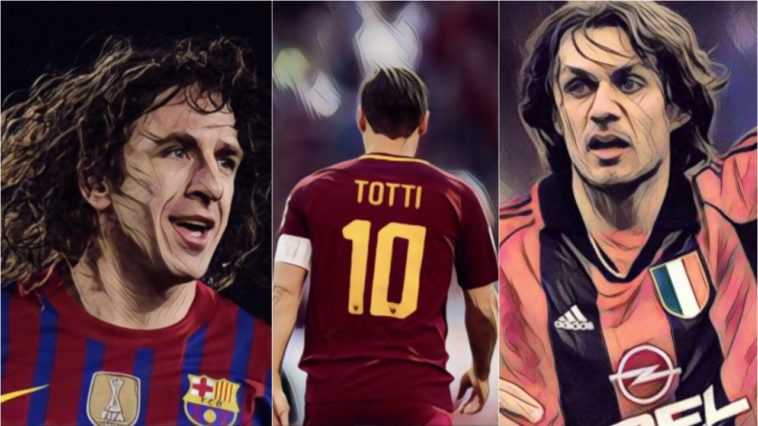 One club men are becoming a rarer breed of footballer in this day and age, but there are those became such massive club icons that we can’t picture them in anything other than the constant colours they wore through their careers.

Perhaps the most iconic of all one club men, Francesco Totti lined out for AS Roma for 25 years, becoming not only the second-highest goalscorer in Serie A history (250) and the club’s highest appearance maker (785), but the living embodiment of the club itself.

Winning the World Cup in 2006 was undoubtedly his career highlight, but the Italian playmaker’s greatest achievement at the club came in 2001. It is very rare for a team outside of the big three of AC Milan, Inter or Juventus to win the Scudetto, but with Totti and Gabriel Batistuta leading the way Roma attained the ultimate glory.

Il Capitano could have played for any club in the world and won any number of trophies with one of Europe’s elite, but he was Rome and Rome was him. After his career finished at the age of 40 he said that he was “not jealous of Juventus… here, a title is worth ten elsewhere.” He understood the value of that solitary title and loyalty better than anyone else.

Totti was made a club director following retirement and a tearful farewell in 2017, but he had a falling out with owner James Perrotta last year. He resigned from his position, claiming that the club did not involve him in decision-making processes, and said he would only return if the club were under new ownership. A bitter end to a 30-year relationship.

Paolo Maldini is not just a One Club Man, but the member of a one club family. His father Cesare also played for AC Milan, winning the European Cup in 1963, while his son Daniel is currently in the youth ranks. It is a dynasty like no other in football.

Like Totti with Roma, Maldini spent a frankly absurd quarter of a century playing for the Rossoneri, with whom he was arguably the greatest defender in world football, covering all four positions in the backline at one point or another. He is a member of the UEFA Champions League 100 Club, winning the competition on five occasions. Only Real Madrid’s Paco Gento (6) has more winner’s medals.

Retiring at the age of 41, Maldini appeared ageless for much of the winter of his career, before eventually retiring in 2009. He is still involved with the Italian club today, where he is technical director.

A Barcelona legend through and through, Carles Puyol began his journey at the Catalan club in the mid-nineties before working his way up the ladder to the senior team, where he won everything there is to win in the game.

The central defender won six La Liga titles and three Champions League trophies as part of one of the greatest club sides of all time, but it wasn’t just the honours he acquired that made him a beloved figure at the Camp Nou. It was also his inimitable style, superb technical abilities and undying commitment to the club that made him such a legend.

One of the most recognisable players with his distinct hairstyle, a 19-year-old Puyol was once suggested to cut his long, shaggy hairdo by then Barcelona manager Louis van Gaal. “What’s your problem, can’t you afford the money for a haircut?”, the Dutchman asked him in his office. “I said nothing,” Puyol remembered, “and to this day have kept my hair as it is.”

It’s hard to imagine the former defender without his mop hair, just as it is difficult to envisage him in anything other than the blue and red of the Blaugrana.

Five of the best Man United vs Barça matches ever

Maybe longevity and loyalty are inherently Italian qualities, seeing as Franco Baresi is third player from The Boot to make this list.

The centre-back had a glorious 20-year career with AC Milan, winning three Champions Leagues with the Rossoneri in the eighties and nineties and appearing in another two finals, while he also won the World Cup with Italy in 1982.

It wasn’t all sunshine and lollipops, however, as Milan were relegated twice to Serie B during the early eighties, but he stayed through the dark times to eventually play a major part in one of the most impenetrable backlines ever.

One of the all-time greats and a Milan legend, Franco’s brother Giuseppe was also professional footballer – for Internazionale. A rare case indeed of siblings who were iconic figures on opposite sides of a fierce rivalry.

Five of the best former Premier League players in Serie A

Lars Ricken was only 20-years-old when he managed the greatest accomplishment of his football career. Coming on as a substitute in the second-half of the UEFA Champions League final in 1997, Borussia Dortmund held a slender one goal lead over reigning champions Juventus.

Substitutions are often made with the hope of making an impact, but this was ridiculous. Latching onto a counter-attack immediately after entering the field of play, the German midfielder lobbed goalkeeper Angelo Peruzzi from thirty yards out to score after just 16 seconds. It is the fastest goal ever scored by a sub in the competition.

This is how you settle a #UCL final 👌

Ricken had also contributed to Dortmund’s back-to-back Bundesliga titles between 1994-96, although injuries hampered much of his career. He won another league title and reached the final of the UEFA Cup in 2002, earning him a place in Germany’s World Cup squad where they finished runners-up.

Ricken, born and raised in the city of Dortmund, was not only there for the good, but for the bad as well. The club very nearly went out of existence in the mid-noughties due to financial mismanagement, but he stayed loyal to the cause when it would have been easy to jump ship.

Injuries brought a premature end to his career at the age of 32, but he was subsequently appointed as the club’s youth coordinator by sporting director Michael Zorc. It has turned out to be one of the best decisions in Borussia’s recent history, as Ricken has overseen the creation of one of the most efficient youth production lines in the entire sport.

“We don’t buy superstars, we make them,” Ricken said earlier this year, referring to their success with Jadon Sancho, Christian Pulisic and Gio Reyna among others. In 2018 he also claimed that “we know each talented player all over Europe, maybe in the world.”

Although his playing career did not reach its full potential, Ricken has dedicated his life to Borussia Dortmund. From the academy to the first team to the front office, this local lad has been with the club for 30 years and will probably be there for 30 more.

An extremely small list of former players can have a greater claim to the title of One Club Man.

Read: The rise, fall and rise again of Borussia Dortmund

See Also: The greatest one club men of the Premier League era