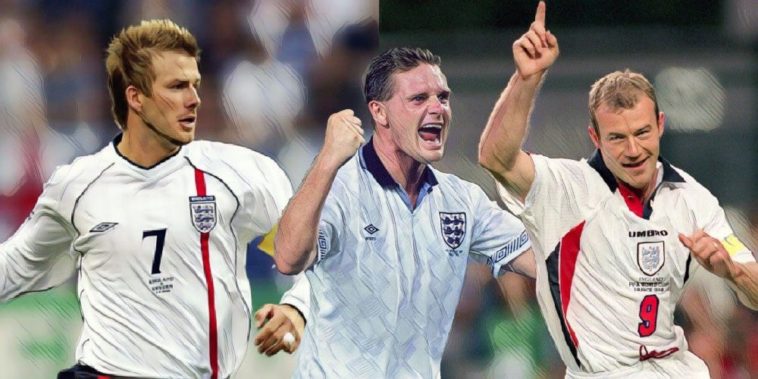 England’s Euro 2020 qualifier against Montenegro at Wembley on Thursday night will mark the 1000th fixture in the history of a proud footballing nation. Whisper it quietly though, but a single World Cup triumph over 50 years ago is a disappointing return for a country that has produced some truly talented footballers.

Ahead of Gareth Southgate’s side’s celebratory fixture this evening, we’ve decided to compile an all-time XI of England’s greatest ever players.

It was a difficult selection but we’ve shoehorned the side into a 4-4-2 formation incorporating a diamond midfield, which is perhaps symbolic of many an England manager who have often failed to find a working balance despite a wealth of talent.

Here is The Football Faithful‘s Greatest ever England XI…

The legendary goalkeeper formed part of England’s World Cup winning side of 1966, providing the solid foundation that allowed the country to seal the only silverware of their long history on home soil.

Banks, who spent the majority of his club career with Leicester and Stoke, would make his debut for England against Scotland at Wembley in 1963, before helping Sir Alf Ramsey’s side lift the World Cup on the same ground three years later against West Germany.

Banks would go on to win 73 international caps, while his save from Brazil star Pele at the 1970 World Cup is remembered as one of the most iconic in goalkeeping history.

A consistent performer in an international career that would span 12 years and five major tournaments, Neville was the youngest first-choice player for England during their run to the semi-finals of the 1996 European Championships on home soil.

The former Manchester United defender would earn 85 caps for the Three Lions, becoming the most capped right-back in the country’s history and making more appearances at the European Championships than any other England player, having featured 11 times over three tournaments.

Moore’s place in English footballing folklore will be forever assured, having captained the side to World Cup glory in 1966.

England’s youngest ever captain and widely regarded as one of the greatest defenders of all-time, Moore won 108 caps for England, scoring two goals, and was described by Pele as his greatest ever opponent.

An excellent reader of the play, the West Ham great also gained plaudits for his approach to the game with the likes of Sir Alex Ferguson and Franz Beckenbauer praising Moore as the greatest defender football has seen.

The first footballer in history to win 100 international caps, Wolves legend Billy Wright captained England on a record 90 occasions including at 1950, 1954 and 1958 World Cups.

Never cautioned or sent off throughout his career, Wright would make his debut in a post-war ‘Victory International’ against Belgium in 1946 before making his first start in a 7-2 thrashing of Ireland later that year.

He would finish as runner-up to Real Madrid legend Alfredo Di Stefano in the 1957 Ballon d’Or, retiring from football in 1959 having made a then-record 105 appearances for England.

One of a group of English player’s lauded as the ‘Golden Generation’, former Arsenal and Chelsea left-back is probably the sole representative of that collective to perform to their capabilities at major tournaments.

Regarded by many as the world’s best left-back during his prime, Cole would become one of just eight English centurions, having amassed 107 caps over an England career that saw him feature in three World Cups and two European Championships.

His performance against Cristiano Ronaldo at Euro 2004 in Portugal is widely regarded as one of his finest in an England shirt, as arguably the Three Lion’s greatest hope of landing a major trophy in recent times ended in penalty shoot-out defeat.

Nicknamed ‘Captain Marvel’, Robson was the complete midfield player, capable of influencing the play at either end of the pitch.

The former Manchester United midfielder would score 26 goals in 90 caps for England, whilst only Bobby Moore and Billy Wright have captained the national side on more occasions than Robson (65).

Robson would feature at four major tournaments, though injury would hamper his influence at World Cups in both 1986 and 1990. He was however regarded as the best player of his generation, combining a unique blend of midfield attributes with a fiercely competitive nature.

Few players have ever enjoyed such a rollercoaster relationship with the national side as David Beckham.

Emerging as the bright young thing at Manchester United with a wand of a right foot, Beckham would force his way into the national side and headed to the 1998 World Cup in a squad with ambitions of winning the tournament.

A fine free-kick against Colombia would quickly be forgotten following his petulant kick at Argentina’s Diego Simeone in the last-16, his dismissal a key factor in the 10-men of exiting the tournament and making him a hate figure to the English public.

He would rebuild his reputation and redemption was complete three years later, securing England’s qualification to the 2002 World Cup as captain in dramatic fashion with a stunning free-kick against Greece.

Beckham would score a decisive penalty against Argentina in the aforementioned tournament, the midfielder the only English player in history to have scored at three World Cup tournaments.

He would earn 115 caps over a 13-year international career, scoring 17 goals and captaining the Three Lions on 59 occasions.

A generational talent who would inspire England fans across the country, Paul Gascoigne is one of the most naturally talented footballers the Three Lions have ever produced.

He would star as a youngster in Sir Bobby Robson’s side’s run to the semi-finals of the 1990 World Cup, his tears in the last four when receiving a booking that would rule him out of the final should England make it one of the most iconic images of the national side’s history.

Gascoigne would star again during another run to the semi-finals of a major tournament, this time the 1996 European Championships on home soil in which he scored a stunning goal against Scotland in the group stage.

One of the most popular players to have donned his country’s colours, Gascoigne would score ten times in 57 international appearances.

Arguably the greatest English footballer of all-time, Sir Bobby Charlton would survive the Munich air disaster with Manchester United before becoming one of England’s best ever talents.

Charlton would be called up to the England squad for the first time just two months after that disaster, scoring on his debut against Scotland and quickly finding his feet at international level, scoring 25 goals in his first 38 caps.

By 1966, Charlton was regarded as one of the planet’s best talents and would prove a key figure in England’s World Cup success. The midfielder would score three times during the tournament, including both goals in the 2-1 semi-final win over Portugal and was named as the Ballon d’Or winner later that year.

He would retire from international duty following the 1970 World Cup in Mexico, having scored 49 goals in 106 caps, both national records at the time of his retirement.

He remains England’s second-highest scorer of all-time, with only Wayne Rooney having surpassed his record.

See also – 10 of the best quotes about Sir Bobby Charlton

Long before his stint flogging crisps and propping up the Match of the Day sofa, Gary Lineker was England’s go-to guy when it came putting the ball in the back of the net.

The former Everton, Tottenham and Barcelona star scored prolifically for the national side, hitting 48 goals in 86 caps and winning the Golden Boot at the 1986 World Cup in Mexico, one of only two England players to have won the award, Harry Kane being the other in 2018.

Lineker would score four goals as England reached the semi-finals four years later, as English hearts would ultimately be broken with a penalty defeat to West Germany.

A true penalty-box predator, Lineker is one of few English players to have delivered at major tournaments with only seven players in the tournament’s history having managed more than his 10 World Cup goals.

A penalty miss to equal Charlton’s goalscoring record and his on-field soiling of himself against the Irish at the 1990 World Cup were low points, but a stellar career nonetheless.

The greatest goalscorer in the history of the Premier League was also a formidable presence on the international stage, proving a talismanic figure for England on occasion and captaining the side at two major tournaments.

He would score on his senior England debut but struggled to initially replicate his club form on the international stage, with many questioning his place in the side ahead of the 1996 European Championships. Shearer would answer his critics in emphatic style, scoring five times during England’s run to the semi-finals to finish as the tournament’s top scorer before the inevitable penalty shootout exit.

The Newcastle legend would captain England 34 times including at both the 1998 World Cup and Euro 2000, scoring 30 goals in 64 appearances for the Three Lions.

England’s most-capped player of all-time Peter Shilton is our pick to deputise for Banks, whilst we also include several members of the aforementioned ‘Golden Generation’ on our substitutes bench despite their underachievement at major tournaments.

Rio Ferdinand earns his place as our defensive replacement, whilst Paul Scholes and Steven Gerrard bolster out squad as alternatives to our midfield diamond.