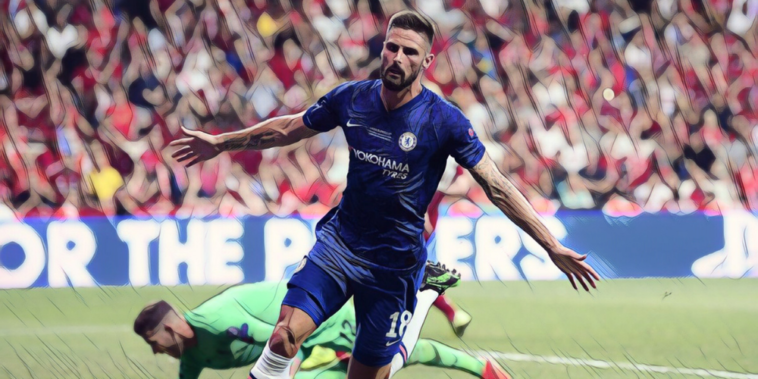 Olivier Giroud waves goodbye to the Premier League this summer, the veteran forward signing for AC Milan from Chelsea in search of the first-team football that has largely alluded him in recent campaigns.

The France international has been amongst the most selfless strikers the Premier League has seen over the past decade, a player who for all of his achievements perhaps remains ‘underrated’ amongst English football fans – even if that label ironically loses weight the more often it is claimed.

Giroud has been the perfect plan B for much of his time with London rivals Arsenal and Chelsea when perhaps his talent deserved so much more – this, after all, is a man who trails only Thierry Henry for goals for the French national side.

The second-highest scoring substitute in Premier League history, his ability to impact games off the bench perhaps prevented him from achieving what he really wanted, a regular run of starts and a chance to prove himself as the club’s leading number nine.

Giroud, however, should be celebrated for everything that he was, a powerful forward with a velvety first touch and one who produced no shortage of spectacular moments during a Premier League career that delivered some truly glorious goals.

Giroud’s route to the top was far from orthodox or straightforward, a relative later bloomer who began his career with hometown club Grenoble, before a spell with fellow Ligue 2 outfit Tours saw him rise to wider prominence.

His second season with the club saw the forward score 24 goals in all competitions to be named as Ligue 2’s Player of the Year despite a disappointing 11th-placed finish for Tours, though his performances attracted the interest of top-tier Montpellier.

Montpellier had enjoyed an impressive return to the top division after promotion the previous season, finishing fifth to qualify for the Europa League.

Giroud arrived for a fee of just £2m and handled the step-up in quality impressively despite a bout of second season syndrome for Montpellier, scoring 12 league goals despite a concerning run of form that saw Rene Girard’s side win just two of their final 14 fixtures to finish only three points above the relegation places.

In a time where the financial disparity between the elite and the rest makes sporting shocks almost impossible, the following season saw Montpellier – led by their formidable and flourishing forward – rewrite history to win Ligue 1 for the first time.

Paris Saint-Germain’s recent billionaire investment had made the Parisians strong title favourites, but Montpellier’s team scaled the summit of French football in a triumph of unity, hard-work and some astute work in the transfer market.

Giroud finished the 2011/12 campaign with a divisional high of 21 league goals, with PSG, Bayern Munich and Arsenal all circling for his signature, the latter securing the services of the shock champion’s prized possession for a fee of around just €12m.

Giroud arrived amid the sizeable task of filling the void left by Robin van Persie’s defection to Manchester United, the club captain and reigning Footballer of the Year having left for Old Trafford in search of elusive silverware.

Sharing the forward responsibilities alongside Lukas Podolski and Theo Walcott, his debut season saw the summer signing shown signs of promise, netting 17 goals in all competitions.

The following season proved the most productive of his Premier League career as Giroud was entrusted with being Arsenal’s leading line of attack, starting 36 league fixtures and finishing the 2013/14 season with 16 league goals and a further eight assists, in addition to lifting the FA Cup as a nine-year trophy drought was ended for the Gunners.

Giroud missed much of the early part of the following season with a fractured foot, though continued to showcase his ability as a goalscorer and link player, scoring 19 goals in all competitions, including the fourth as a second successive FA Cup was secured.

From rifled efforts to towering headers and deft finishes, Giroud’s repertoire of finishing continued to catch the attention and it is this wonderful effort against Crystal Palace that begins our countdown through some of his greatest goals.

Arsenal had began the 2015/16 Premier League campaign with a shock home defeat to West Ham at the Emirates, though got their season up and running with a hard-fought win at Selhurst Park, a fixture that was illuminated by a moment of magic from their number 12.

Mesut Ozil’s cross is met acrobatically by the French forward, whose athletic effort opened the scoring against the Eagles as the Gunners secured their first three points of the season in south London.

Moments of mid-air contortion became something of a speciality for Giroud throughout his time in English football, his imposing frame belying a capacity to produce something both special and athletic.

It also led to arguably one of the Premier League’s greatest ever goals.

Football fans gather in their thousands to see the finest players the Premier League has to offer, each week hoping to witness something out of the ordinary.

Giroud’s greatest Golazo was one such moment, a piece of improvised and incomprehensible ingenuity that left the watching world stunned.

The France international was heavily involved in the build-up play with an intelligent flicked pass into the path of Granit Xhaka inside his own half, before powering forward to rejoin the Arsenal attack as Alex Iwobi and Alexis Sanchez break at speed.

Sanchez pauses in possession to wait for the arriving cavalry, before hoisting a ball into the box that falls behind Giroud’s forward run.

It matters little, as the forward executes an incredible finish, a brilliant back-heeled volley which flew over his own head and in off the underside of the crossbar – an always pleasing aesthetic – to become a more than fitting winner of FIFA’s Puskas Award.

Our next offering saw Giroud snatch victory in an atmospheric Marakana in Serbia, as the north Londoners edged past Red Star Belgrade to maintain their perfect record during the 2017/18 Europa League group stages.

Once again the forward found a dropping ball fall awkwardly in his direction, only to twist and execute another finish of perfect technique to snatch an all important European win for the Gunners on the road.

On the subject of elite goals…

Giroud’s presence in that rotated side in Serbia was evidence of his slipping status at the Emirates, the summer signing of Alexandre Lacazette having pushed the forward down the pecking order.

He started just once in the Premier League for Arsenal over the opening months of the 2017/18 season, before being allowed to depart during the winter window – making a shock move to London rivals Chelsea.

Giroud’s advancing years and competition for places meant that his three-and-a-half-year spell at Stamford Bridge saw him come in and out of favour, his finest moments coming in cup competition.

Just months after arriving he was celebrating his first winners’ medal with the west London side, lifting the FA Cup for a fourth time as Manchester United were beaten at Wembley.

Chelsea had their winter window recruit to thank for reaching the showpiece following this semi-final opener against Southampton, leaving a quartet of Saints defenders scrambling and in his wake after a solo stunner.

He also compiled an outstanding record in the Europa League as Chelsea won the tournament during his first full season at Stamford Bridge, scoring 11 goals in just 12 starts including this fantastic free-kick to spare Chelsea’s blushes against Hungarian minnows Vidi.

Free-kicks were one type of finish not often associated with the Gallic goalscorer, but this whipped effort showed there was not much Giroud was not capable of when taking sight of goal.

Olivier Giroud with the stunning free-kick! 😮

Who knew he had that in the locker?

With a man on the post as well! 👌 pic.twitter.com/HegT2cncvQ

Giroud’s prolificacy continued even during a bit-part role in his final season as a Premier League player, playing a prominent role in Chelsea’s run to the latter stages of the Champions League.

He scored four times during an exhilarating individual performance against Sevilla to become the Champions League’s oldest ever hat-trick scorer, before scoring one of the great goals to secure a quarter-final advantage against Atletico Madrid.

Giroud’s mastery of producing the spectacular reached new heights with an audacious overhead kick, capitalising on a miscued clearance to fire home a breathtaking bicycle-style effort to seal victory for Chelsea.
The combination of timing and technique has been evident throughout Giroud’s career to date, but perhaps never more so than this match-winner that set Chelsea on their pathway to Champions League success.

And so Giroud departs for his next venture, having scored 144 goals across all competitions for the two London rivals, despite being named as a substitute frustratingly frequently.

His glorious goalscoring exploits and delightfully delicate link-up play has made Giroud a popular Premier League figure, a footballer so often under-used but capable of the mesmerising when given the chance to showcase his quality.

Milan shapes as his next port of call where he will be tasked with firing the Rossonerri’s return to the Champions League this season, the San Siro now the stage for the 34-year-old whose list of Golazos may just grow that little longer in the coming seasons.