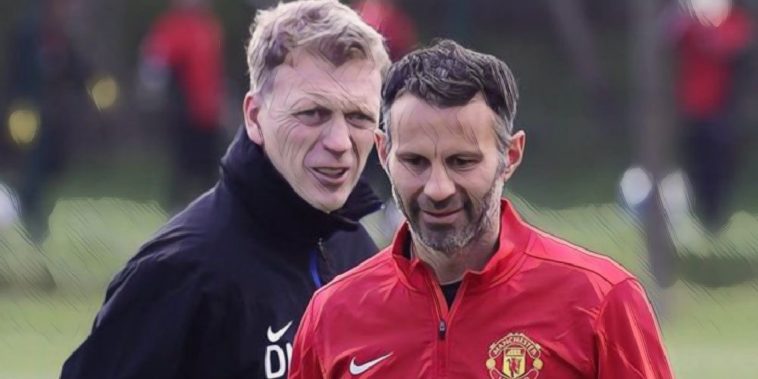 Ryan Giggs has opened up on his ‘difficult’ transition from player to coach at Manchester United and admits he had little responsibility during David Moyes’ ill-fated tenure at the club.

Giggs’ final season of an illustrious playing career at Manchester United came during Moyes’ brief period at Old Trafford, the former Everton boss lasting less than a season after being chosen to succeed the retiring Sir Alex Ferguson.

Moyes invited Giggs to join his coaching set-up as the Welshman prepared for the next stage of his career, though he admits he struggled with the transition and had limited coaching responsibility as he juggled the dual roles of both coach and player.

“It was a little bit different,” Giggs said on the UTD podcast.

“I was already distancing myself from the players, but I was 39, 40, so did I have anything in common with the younger players? Not really, but obviously you’re in the dressing room and still teammates.

“I was doing my Pro Licence in Turkey when David Moyes rang to ask me to join him as a coach. I thought ‘this could be my last season’ and I wanted to concentrate on that, but I also realised this was my next step, so I took it.

“But actually I was really still a player, I didn’t really get involved (with the coaching). I didn’t take one session because I was playing, so you can’t.

The most decorated player in #MUFC history with 3️⃣4️⃣ trophies, Giggsy won the lot… 🏆

🎙️ Sound 🔛 to hear our legendary winger discuss which ones meant the most and much more in our latest UTD Podcast 👇 pic.twitter.com/ANScyRmfbp

“I was involved in the meetings and went in early to training, but even that became difficult because you’d arrive an hour and a half before and I had a routine in which I’d get ready for training, so even that was getting more and more difficult.

“My relationship with the players didn’t change, I’d just come down from the meeting and they’d ask me ‘what are we doing today?’”

Moyes was sacked following a dismal spell, with Giggs replacing the Scot on a caretaker basis, taking charge of the final games of the campaign before the arrival of Louis van Gaal.

Giggs retired as a player at the end of the season and moved into a full-time coaching role alongside the experienced Dutchman, and the now Wales manager was full of praise for the tutelage he received under Van Gaal.

“They had a different approach, they were different people with different personalities and that’s why I always talk about Louis really regarding my coaching, because for two years I was in the meetings with that responsibility,” he continued.

“I talk so fondly of him because that was my first proper coaching role. When you’re playing, you don’t really know about all the preparation or what the manager has seen on the videos, watching the opposition.

“The coaching staff would watch hours and hours of it. It was completely different, including the man-management and the sort of things Sir Alex would do that I picked up on.

See also – 15 of the best quotes about Ryan Giggs