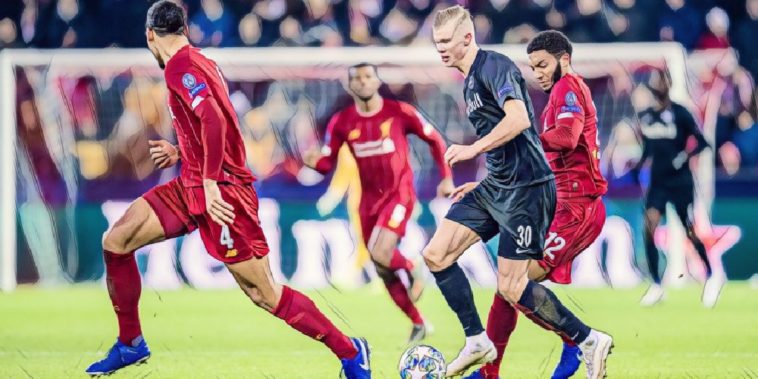 Jan Age Fjortoft has recalled how the performance of Erling Haaland against Liverpool in this season’s Champions League left Virgil van Dijk ‘angry’.

Haaland has announced himself as one of the stars of European football following an incredible breakthrough campaign, scoring prolifically for Red Bull Salzburg to earn a mid-season move to Borussia Dortmund.

The Norwegian scored a hat-trick on his Champions League debut for Salzburg and became the first teenager in history to score in each of their first five fixtures in the competition, including a goal in a thrilling 4-3 defeat to European champions Liverpool at Anfield.

Former Middlesbrough and Sheffield United forward Fjortoft has now revealed how his compatriot’s showing that night seemed to have riled Van Dijk in the defender’s post-match interview.

“The first time I saw him live was at Anfield when he came on and I was amazed that this young kid created so much space,” Fjortoft told the Red Blood podcast.

“He scored one goal but he could have had three or four – he was unbelievable. I was amazed how he created space and how I define that is how his runs are wise and experienced.

“After the game, I interviewed Van Dijk, who I always like to interview because he is a gentleman, and I said ‘I have to ask you about the Norwegian, Erling Haaland’.

“And he just said: ‘Well, we won the game’. So I said ‘Yes, but what do you think about him?’. Van Dijk said: ‘I didn’t see a lot of him’ and he was a bit angry because there was some mistakes done.

“And I said ‘It’s a good sign for a striker when a defender says he didn’t see him!’ – and then he just went away, Van Dijk.”

Haaland has continued his sensational goalscoring exploits since making the move to the Bundesliga, taking his tally to 41 goals in all competitions this season after scoring 10 times in just eight league starts for Dortmund.

Fjortoft says the forward is in the ‘right place’ to continue his development at present, but believes that the 19-year-old is destined to one day showcase his talents in the Premier League, the striker having been born in Leeds.

“At Dortmund, he has players like Julian Brandt who sees [his runs],” Fjortoft added.

“I think he’ll end up in England at some stage, but he is 19 and we should make space to have five games without scoring.

“We should just wait and see how he is doing – he is at the right place now.”