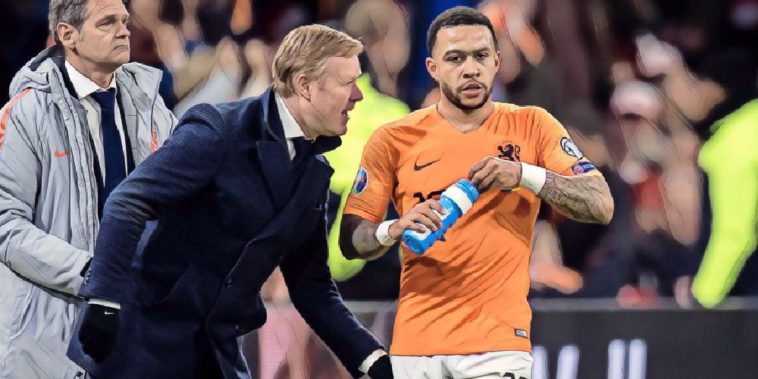 Barcelona are closing in on a €30m deal to sign Memphis Depay from Lyon, as Ronald Koeman looks to overhaul his squad at the Camp Nou.

The Netherlands international has rebuilt his career in France following a hugely disappointing spell with Manchester United, Depay struggling to make an impact in the Premier League following his arrival from PSV Eindhoven.

The forward spent just 18 months at Old Trafford and scored just two league goals, but has since enjoyed a prolific spell with Lyon and boasts a record of 46 goals in just 104 league appearances for the Ligue 1 side.

That form has attracted the attention of Barcelona and Depay is now nearing a move to Spanish football, where he will be reunited with former national side coach Koeman following his recent appointment in Catalonia.

Depay thrived under the guidance of his compatriot for the Dutch national side, scoring 11 goals and providing a further 12 assists in just 18 appearances in a central attacking role, the 26-year-old set to sign as a replacement for Luis Suarez who has been linked with Juventus after being told by Koeman he is not part of his plans.

Depay has just a year remaining on his current contract, with Dutch publication De Telegraaf reporting that Barcelona are now close to completing a deal worth an initial €25m, the figure potentially rising by a further €5m with add-ons.

Manchester United had first refusal on the player after inserting a buy-back clause into the sale of Depay to Lyon three-and-a-half years ago, but have opted against making a bid despite Ole Gunnar Solskjaer’s desire to add to his attacking options this summer.

Barcelona had previously been linked with a move for Inter Milan star Lautaro Martinez, though the Argentina international’s huge price-tag has made a deal difficult in the current financial climate.

Depay is now set to become Barcelona’s second major signing of the summer following the capture of Miralem Pjanić from Juventus, whilst the club also continue to be linked with a move for Liverpool midfielder Georginio Wijnaldum.