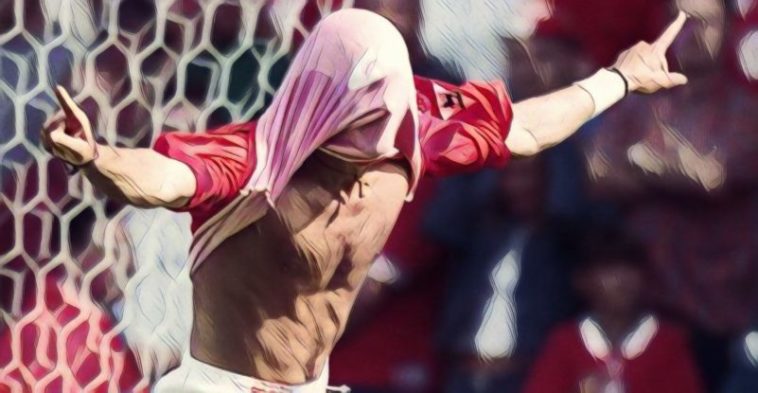 Bruno Fernandes began the new season in perfect style with an opening day hat-trick for Manchester United against Leeds, the midfielder’s treble seeing him join an exclusive club of Premier League stars.

Just 10 players in the division’s illustrious history have opened the season with a treble, but just who are the opening day hat-trick heroes to have taken home the match ball?

Here are the players to have scored a hat-trick on the Premier League’s opening weekend:

The first player to achieve the feat was Coventry City forward Micky Quinn, who notched a treble in his side’s shock 3-0 win over Arsenal way back in 1993.

Arsenal were expected to be amongst the contenders despite a disappointing 10th-placed finish the previous season, but their campaign could hardly have began worse after Quinn’s hat-trick silenced Highbury.

Beer-bellied striker Quinn, who once famously claimed he could beat Linford Christie over a yard, opened his account via the penalty spot, before beating David Seaman twice more in the second half to seal a surprise win for the Midlands side.

The Southampton legend boasts arguably the best individual highlight reel in Premier League history, but sadly has the unwanted record of being the only player to hit an opening day hat-trick in defeat.

Le Tissier’s strikes all came from set-pieces, scoring twice from the penalty spot before curling home a free-kick, though his efforts were in vain as the Saints fell to a 4-3 defeat to Nottingham Forest at The Dell.

Remarkably, the Southampton star had also hit a hat-trick in defeat on the final day of the 1992/93 season, the only player in Premier League history to have achieved the feat twice.

Having conceded an opening day hat-trick the previous season, Nottingham Forest scored one of their own on the opening day of the 1996/97 campaign.

Kevin Campbell was the hero for Forest, netting all three goals as they beat Coventry City 3-0 to start the new season in impressive fashion.

However, Campbell’s hat-trick proved to be a rare highlight in a disappointing season, as Forest were relegated from the Premier League after finishing bottom of the division.

Hitting an opening day hat-trick might be one thing, to do it on your debut for your new club is another matter entirely.

Liverpool thrice took the lead on Teeside, only for Ravanelli to respond each time and instantly endear himself to his new supporters.

Ravanelli’s 16 league goals that season were not enough to save his new club however, and like Campbell at Forest that same season, an opening day hat-trick ended in relegation.

Coventry City hold the honour of being the only club in Premier League history to have scored two opening day hat-tricks, as Dion Dublin celebrated the return of England’s top flight with a treble against Chelsea in 1997.

Dublin’s goals helped Coventry twice come from behind to beat the west London side at Highfield Road, a brace of headers followed by a superb half-volleyed finish.

The forward’s hat-trick was part of 18 goals scored that season, enough to see him share the Premier League’s Golden Boot alongside Blackburn’s Chris Sutton and Liverpool’s Michael Owen.

After four opening day hat-tricks in just three seasons, there was over a decade wait before Aston Villa’s Gabriel Agbonlahor joined the exclusive club in 2008.

Agbonlahor achieved the feat in a remarkable seven-minute spell, hitting a perfect hat-trick to blow away Manchester City in an entertaining 4-2 win at Villa Park.

The then 21-year-old scored with his right foot, left foot and head in a perfect start to the season, ruining City boss Mark Hughes’ first game in charge of the club.

City’s disappointment was short-lived however, as just weeks later Sheikh Mansour completed his billionaire takeover of the club to usher in a new dawn of success at the Etihad.

Chelsea icon Didier Drogba got his club’s season up and running in 2010, firing a hat-trick as Carlo Ancelotti’s side hit West Bromwich Albion for six at Stamford Bridge.

His opener was a fine free-kick, before scoring from close range and completing his treble courtesy of a deflection. Chelsea’s final game of the previous season had been an 8-0 thrashing of Wigan as they secured the title, a game in which Drogba also scored a hat-trick.

The Ivorian forward’s treble meant he scored hat-tricks in two consecutive Premier League games, one of just five players – alongside the likes of Thierry Henry and Wayne Rooney – to have achieved the feat.

Raheem Sterling joined this list of hat-trick heroes courtesy of a treble at West Ham on the opening day of the 2019/20 season, the Manchester City star producing a clinical performance as Pep Guardiola’s side ran riot in the capital.

West Ham struggled to live with the England international, who scored the third Premier League hat-trick of his career in City’s emphatic 5-0 win at the London Stadium.

Sterling’s haul also saw him score his 50th league goal for City, becoming the sixth player to achieve the feat for the club in the Premier League era.

Mohamed Salah began the 2020/21 season in fine fashion by netting a treble against newly-promoted Leeds, the forward’s superb showing ensuring the defending champions edged a thriller at Anfield.

Liverpool were made to work for three points in a hugely entertaining clash on Merseyside, the visitors shading the possession and thrice coming from behind to level.

Salah, however, provided a reminder of just why he is regarded as one of the Premier League’s finest footballers, scoring three times including two penalties to take an early lead in the race for the Golden Boot.

The Egyptian finished as the division’s leading scorer in back-to-back seasons in 2018 and 2019, before finishing as runner-up for the accolade last season.

For the second successive seasons Leeds found themselves on the wrong side of an opening weekend hat-trick, with Bruno Fernandes netting a treble as Manchester United thrashed their northern rivals 5-1 this weekend.

Fernandes was at the centre of an impressive performance for the Red Devils at Old Trafford, opening the scoring after being played in by Paul Pogba – who became just the eighth player to provide four assists in a Premier League fixture.

The midfielder’s forward running and ruthless finishing was evident once again as he helped himself to the match ball, his first hat-trick since making the move to English football form Sporting Lisbon.

Fernandes finished as the club’s leading scorer with 28 goals in all competitions last term and looks primed for another productive season as the talisman of Ole Gunnar Solskjaer’s side.