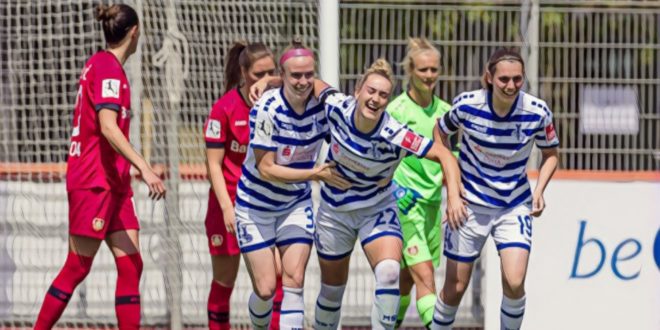 By the end of this month all of the top four leagues in Europe will have returned to action, as the Premier League, La Liga and Serie A all revealed their plans this week to finish the current season.

With the coronavirus pandemic forcing football, and most of everyday life, to stop at the drop of a hat, this has been one of the most unusual and extraordinary seasons in living memory, if not in the history of the sport.

In this context, it is a particularly strange time for the footballers themselves, who are so used to the regiment of weekly training sessions and matches. How has this affected them and what will it be like for them to return in the current climate? To find out, we spoke to Irish international and MSV Duisburg player Claire O’Riordan.

Having restarted in May, the men’s Bundesliga and the Frauen-Bundesliga were the first professional football leagues in Europe to return during the pandemic, which can offer us a preview of and an insight into how the resumption of football in England may play out.

For O’Riordan and her teammates, the interruption to the campaign came at a bad time. The Zebras have struggled in recent seasons due to financial constraints and this year has been no different, winning just two of their 16 games before football was suspended. But they had just strung two consecutive draws together, including an impressive 2-2 with second-placed Bayern Munich.

In a relegation battle any form of momentum can be a difference maker, but this had the potential to derail that. Luckily the Ruhr outfit have built upon those good results by beating Bayer Leverkusen and getting a draw against FC Köln, two clubs around them in the table, since returning.

“Four games undefeated for us is massive, so we’re really grateful for that, but I definitely think it is something we deserve,” the Limerick native tells The Football Faithful.

The point against Köln was particularly sweet, as Duisburg snatched it from the jaws of defeat in the 93rd minute. The goal came as a result of a hit-and-hope ball into the box from the goalkeeper who found the head of Kristina Maksuti, her resultant header looping into the net and setting off wild celebrations as they piled on each other in delirium.

She herself contributed to the result by making an important last-ditch clearance in the second-half.  A win for their opponents would have closed the gap to two points with a game in hand for the visitors, who remain in the bottom two. “That little bit of breathing space is good, because at the moment we’re vying for position with Bayer Leverkusen on 13 points each and Köln are behind us on eight.”

When football was suspended across Europe, O’Riordan used the opportunity to fly home to Limerick and spend valuable time with her family, something she has rarely been able to do since moving to Germany. It made lockdown all the easier to deal with.

“I was really happy at home, because I hadn’t been home for a long time, in years, so it was really good to spend time with the family and see my nieces grow up a little bit,” she says.

One of the biggest challenges for footballers these past few months has been maintaining fitness at the requisite level for professional football. Motivation can waver, particularly when it’s not clear what or when you’re training for, but for O’Riordan she just didn’t want to overdo it.

Like virtually every team at the moment the club were monitoring her and her teammates’ progress from afar, but it’s just not the same as the real thing. “It was challenging at times but I got through it. It was a long two months of not being with the team training, but I was thankful to come back and see a ball, put it that way.”

Maintaining strong mental health has been equally important for footballers at this time, which can be difficult during a period of such uncertainty. But for O’Riordan the timing could hardly have been better in that regard.

“To be quite honest with you, personally the break probably came at a really good time for me, because mentally I was just being challenged a lot; just about my football here with the club and then internationally as well.”

When she joined Duisburg from Wexford Youths in 2018, she was primarily a striker for club and country, but since then she has been transformed into a centre-back. “As time has crept on with that, different thoughts and ideas have kind of entered my head,” she admitted.

“I’ve just been challenged in that sense, so I actually welcomed the break to just not have to think about it for a little, and just enjoy spending time with my family, switch off from the football for a bit.

“But then obviously when things were getting back up and running, I was itching for a game. I was glad that I only had to wait two weeks to play a game and not have a five or six week long pre-season, where you’re just waiting and going through the hard, tough grinding training.”

When the all-important decisions were being made to resume German football, O’Riordan admits she and her colleagues were “a little bit sceptical”, particularly because no other European league had at that point returned. But their doubts were gradually assuaged and the fact they are tested two to three times a week has put them at ease.

“We’re following the precautions we have to, all the rules with the masks and we’re being very careful with the hand sanitisers and social distancing, and so on,” she says.

“So I can see from coming back that it is okay to come back, as long as you have the right structures in place in terms of your testing and the rules that you need to be following in terms of training and games and all of that. Once that’s followed then everything has been smooth sailing for us so far.”

It’s common for teams to spend the night before a match in a hotel, but ahead of the resumption of the Frauen-Bundesliga teams were required to spend an entire week in quarantine in a hotel together, something that Premier League and Championship squads are likely going to have to look forward to later this month.

Those players will also be faced with the prospect of playing in front of empty stands, an eerie experience that could have an effect on home advantage. Although Duisburg don’t attract anywhere near the kind of attendances seen in the top two tiers of English football, the difference has been felt out on the pitch.

“Obviously that is a factor, because when we went out to play the game on Saturday against Leverkusen it was strange because our Zebra fans weren’t in the stand with their drum and singing. We knew that they were there with us in spirit because they had contacted us through the coach and with videos.

“It was a little bit strange going out onto the pitch, it almost felt like we were going out to play a practice game, even though it was going to be a first tier Bundesliga game. We treated it the same of course and we prepared the same. It was something that we had to get used to and once the game starts, there’s not much that you’re going to be focusing on outside of the game, the ball, the opposition and your teammates.”

There were suggestions that the intensity of matches might lessen given the lengthy break, lack of atmosphere and players whose contracts are expiring and thus want to avoid injury. But O’Riordan suggests everyone is playing at pretty much the same level as before.

“Just from the two games that I’ve played, the first game I can say they (Leverkusen) weren’t up to the standard when they played in a cup game a few days later, but I just think that their mentality had to change after suffering a defeat against us.”

Leverkusen beat Hoffenheim, one of the strongest teams in the division, 3-2 after extra-time in a bonkers match that was 1-1 after 90 minutes. “They enjoyed a lot of possession within the game, but their passing and movement wasn’t as high paced as what it needed to be (against Duisburg).”

“But that kind of comes back on us as well, how we managed the game, not allowing them to play quickly and find the gaps. We kept our organisation and executed our game plan very well.

“But then Thursday night’s game (against FC Köln) was very different as well. Much more high tempo, end-to-end stuff. I don’t think players are taking the foot off the gas at all, I think it’s just that players really have to take adequate care of themselves in terms of injury prevention and recovery. And then hopefully everyone can just get through the game healthy and injury free and come out the right side of it.”

Although the players have been keeping fit, there is still the concern over how their bodies will react to playing football matches at full pace again when they’re not ‘match’ fit. “The changes my body felt the most was probably after the first week of training,” O’Riordan tells us in relation to the small sided matches and sharp sprints taking place in those first sessions back.

“So my body did have a slight reaction to that; the hamstrings, the quads, the glutes. You just need a bit of time for your body to actually adapt to it and it will, of course, adapt, because it’s what I have been doing for a number of years, so the muscles will remember.”

O’Riordan couldn’t actually train with her teammates at first, as she was awaiting results on two Covid-19 tests taken days apart. “They did monitor me and look out for me, that if maybe I wasn’t ready to do the full power session that was designed for the team, who were ready to do it, then maybe my plan would be tweaked that little bit.

“But I can say that after playing the first game, the body felt good. It wasn’t such a high intensity game, it was just the type of game that was played from us and Bayer Leverkusen. Last night’s game was different, so the body today is feeling that little bit more tired and worked.”

There is just five games left to go now this season, with the next one on Sunday against SC Sand. As a key member of the Duisburg squad who has played 93% of the available minutes this year, the second most in the whole squad, the goal for the Irishwoman now is to finish the season strong and avoid injury.

“Morale is really good (in the team). We haven’t lost in four games, so we’re just going to take it one game at a game. There’s five games left and we’ll just prepare, play, recover, and we’ll do the best we can and keep on fighting.”

The players will no doubt be looking forward to a well earned break, but with the football calendar thrown upside down, there’s every possibility there will only be a very short break before pre-season gets underway, a dilemma facing every league in the near future. “I don’t really know how that’s going to pan out, but we’ll cross that bridge when we come to it.”

It’s not the sport as we once knew it, but German football has shown a way through the pandemic.

You can watch Frauen-Bundesliga matches live on the DFB website for free.