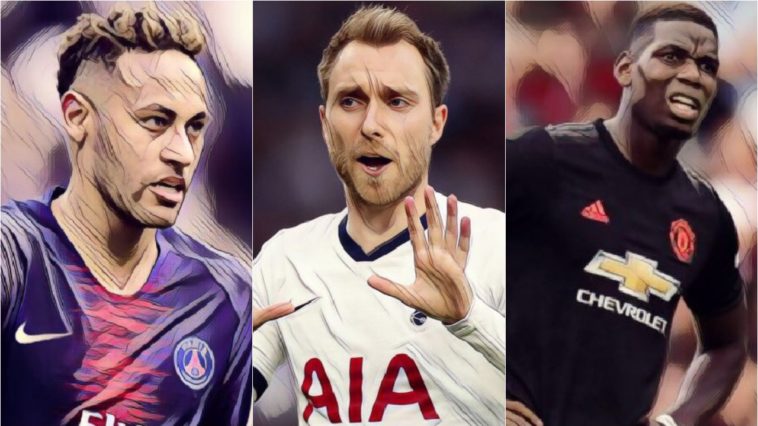 There were a number of footballers who wanted transfers away from their current clubs, but are now stuck in the same place.

You don’t always get what you want in life. These footballers certainly didn’t, as none of them got the move they really wanted in the end when the transfer window was slammed shut.

Few moves have been as disastrous for a footballer’s career as Neymar’s transfer to Paris Saint-Germain in 2017. The Brazilian’s talent is second only to Lionel Messi, and he left Barcelona to get out of the Argentine”s shadow, but his time in the French capital has been a series of mishaps and disasters.

From the get-go the deal was off to a bad start, with Barcelona triggering a lawsuit to recover a loyalty bonus the player had received. He ruffled feathers in the dressing room too, causing a feud with Edinson Cavani over who should be the designated penalty taker. There’s also been the late night parties (one of which his manager at the time Unai Emery attended), an accusation of rape, and punching a spectator at the French Cup final.

When he’s not been injured, Neymar has been as effective as ever, scoring 51 goals in 58 appearances in all competitions for PSG, but it’s clear he wants out and the club want to be rid of him too. He was desperate for a move back to Barça, even going so far as to not show up for pre-season training in July, while Real Madrid were also keen to sign him. Unfortunately, the number ten is too expensive for him own good and he might be stranded in Paris for the foreseeable future.

As talented a footballer as Paul Pogba is, the relationship between him and Manchester United just has not worked as well as hoped when he returned to Old Trafford in 2016.

The Frenchman said during the summer that wouldn’t mind a “new challenge”, but he didn’t push hard for a move away like his colleague Romelu Lukaku did, something he apparently now regrets not doing.

Paul Pogba is loved by everyone at France. 🇫🇷😍 pic.twitter.com/kCZkXqw8eH

The club are evidently keen to keep him, as they see him as their crown jewel and biggest asset in terms of branding and marketability. That doesn’t cut it for fans though, who have been effusive in their criticism of the mercurial midfielder.

Like Neymar he too suffers from being a bit too pricey and there was no gap in the transfer market for him to exploit. Any potential buyers, such as Barcelona, Juventus or Real Madrid, all made big money signings early on in the window. United would likely require over £100m before agreeing to sell, putting him out of range for any interested party.

The five most expensive French players of all time

When Barcelona bought Philippe Coutinho, the player they should have bought was Christian Eriksen. That will come as no consolation to the Dane, who is now stranded at Tottenham Hotspur until his contract runs out next summer.

The playmaker was desperate to move to one of Europe’s super clubs this year, making his feelings known soon after the Champions League final defeat to Liverpool, but the biggest obstacle standing in his way was Daniel Levy.

Christian Eriksen may get his La Liga wish after all…

With the possibility of Eriksen leaving the club for nothing in twelve months time on the cards, the smart thing to do was sell him now if he wasn’t going to sign a new deal. But the Spurs chairmen reportedly wanted £70m for the player, far more than anyone was willing to pay given the circumstances.

Eriksen could sign a new contract between now and the end of the current campaign, but the smart money is on him running down his deal and having his pick of clubs to choose from.

Of the many players who wanted out of Man United this past summer, Marcos Rojo came agonisingly close to getting his wish. Instead he had to watch as Lukaku, Matteo Darmian, Chris Smalling and others got out of dodge while he remains at Old Trafford.

The Argentine was due to join Everton, but United apparently blocked the move. “I had the possibility of going to Everton, but due to the decisions of the club or the manager it wasn’t possible,” he told Argentine outlet Ole. “Now I have to fight until December and, if it doesn’t work out, I will try to leave.”

Marcos Rojo has now been at Manchester United longer than Eric Cantona was.

With the defender clearly not in Ole Gunnar Solskjaer’s plans, Rojo was reportedly “fuming” at the deal not getting over the line before deadline day. He started just twice last season, enduring a string of niggling injuries.

Here’s the strange thing about this one: Shinji Okazaki did get the move he wanted. Initially. Then it came to light that Malaga, the club that had signed him, could not actually afford him.

The Japanese striker left Leicester City after four years and 14 Premier League goals at the club for La Liga’s Segunda Division, but he exited his new club at the beginning of September without playing in a single competitive fixture. Okazaki is now at fellow second tier outfit Huesca.

Read: Why clubs are choosing youth over experience for managerial roles