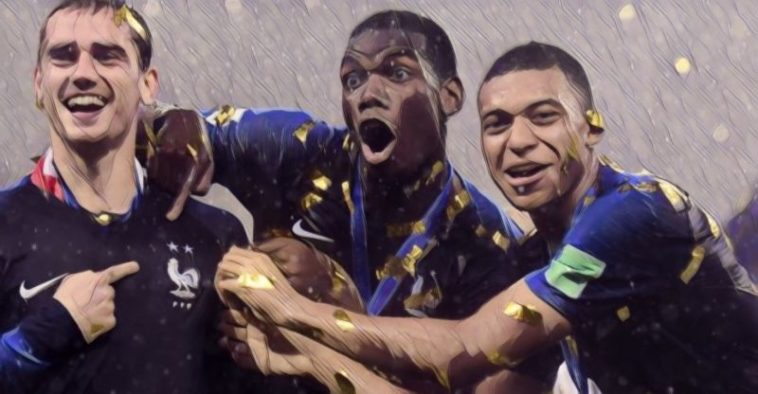 Two-time World Cup winners and the current holders, the French can certainly play a bit. French football has a long and distinguished history, with players such as Michel Platini and Zinedine Zidane rightly regarded amongst the game’s all-time greats.

Whilst the country’s clubs have struggled to make an impact on European football, their players certainly haven’t. European giants have often scrambled to secure the signing of the latest French star, often for mind boggling fees.

Here are the five most expensive French players of all time…

One of 2019’s biggest moves, Atletico Madrid star Lucas Hernandez moved to German giants Bayern Munich in a deal worth a reported £70m.

The Frenchman moves to the serial Bundesliga winners as they bid to revitalise their ageing defence, which Hernandez having shone since making his breakthrough in the Spanish capital.

The 23-year-old is equally adept at either left-back or centrally, and was part of the France squad which were crowned World Champions in 2018.

Having won one Europa League and a UEFA Super Cup during his time at Atletico, Hernandez will hope to win further accolades following his move to five-times European champions Bayern.

Having left Manchester United as a teenager in pursuit of first-team opportunities, Paul Pogba returned to Old Trafford in 2016 in a then world-record deal worth £89m.

The midfielder had established himself as one of the most promising talents in Europe following a move to Juventus, winning four consecutive Serie A titles during his time in Turin.

The lure of returning to United proved strong, however, and Pogba returned to the Premier League as the Jose Mourinho era began in Manchester.

His debut season started promisingly and saw Pogba help the club to a League Cup and Europa League double, though that has been the highlight of his three-year spell at the club.

United’s inability to compete for major honours has seen Pogba reportedly grow disillusioned with life at the club, a potential move has been muted this summer and could see the 26-year-old climb higher up this list.

Signed as a replacement for the outgoing Neymar, Barcelona took a big-money gamble on the talented winger who had spent just one season with Borussia Dortmund.

Having shone by providing 21 assists in his sole season in Germany, Dortmund were unwilling to part with the highly-rated star easily, eventually accepting a bid of £96m for his services.

Dembele’s time at the Nou Camp has been stop-start, with injuries hampering much of his two-year spell in Spain. In 2018/19 he scored eight times in 20 league starts for the La Liga champions, whilst providing a further five assists.

Consecutive La Liga titles have vindicated his move to the Nou Camp in terms of silverware, though Dembele will hope to establish himself as a key player.

Still just 22, the Frenchman could prove to be a crucial member of the Catalan club’s side for seasons to come.

After a much publicised decision to stay with Atletico Madrid in 2018, just a year later Antoine Griezmann opted to leave the Spanish capital for La Liga rivals Barcelona.

The World Cup winner spent five prolific years with Diego Simeone’s side, helping Atletico to Europa League success in 2018. Having been part of the Atletico side beaten in the Champions League final in 2016, Griezmann’s ambition will be to lift Europe’s biggest prize at the Nou Camp.

The 28-year-old cost Barcelona a fee of £108m, making him the second most expensive French footballer of all-time. The Catalan side have won back-to-back La Liga titles in the past two seasons, and adding a player who has scored 94 league goals in just 180 appearances for Los Rojiblancos, to a forward line already containing Lionel Messi and Luis Suarez is likely to make them an even more formidable prospect.

Griezmann has evolved from a promising winger into an elite and versatile forward option, a record of 29 goals in 72 caps for France highlighting his status amongst the world’s best.

Few things cause as much excitement amongst football fans as the emergence of a talented youngster, and few have burst onto the scene as impressively as Kylian Mbappe.

Having shone in the young Monaco side which surprisingly won Ligue 1 and reached the Champions League semi-finals, French rivals PSG decided to splash out £160m to take Mbappe to the capital.

Initially signed on-loan in 2017, Mbappe scored 21 goals in an impressive debut season, helping PSG clinch the Ligue 1 title. The following summer, he became the first teenager since Pele to score in a World Cup final, being named as the tournament’s best young player as France were crowned world champions in 2018.

From there, he has continued to improve. A stunning season saw him crowned as the division’s best player, having finished as top scorer with a remarkable total of 33 league goals in 29 appearances.

Barely out of his teens, Mbappe seems on an unstoppable trajectory to becoming the world’s best player.