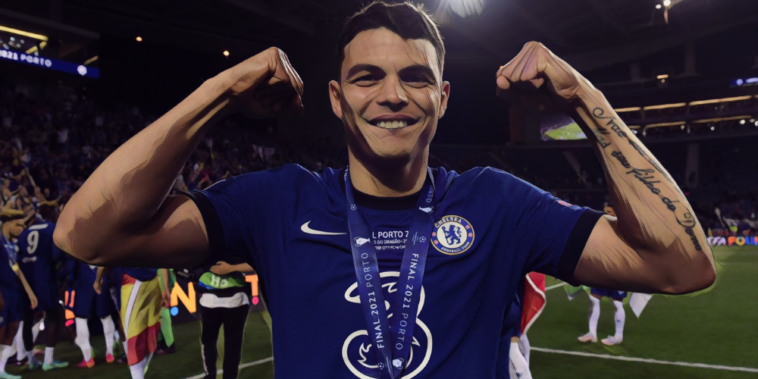 Silva – alongside now Chelsea manager Thomas Tuchel – was part of the Paris Saint-Germain team beaten by Bayern Munich in last season’s competition, before returning to the final in 2020/21 and leaving with a winners’ medal against Manchester City.

Following the Brazilian’s feat, we’ve looked at the five players to play in successive showpieces for different clubs.

Desailly formed part of the Marseille side that became France’s first – and so far only – champions of Europe during the 1992/93 season, as a talented side defeated AC Milan 1-0 in Munich courtesy of Basile Boli’s goal.

Marseille were later stripped of the Ligue 1 title, relegated to the second tier, and banned from Europe after being found guilty of bribery, leading to an exodus of talent with Desailly moving to beaten final opponents Milan.

The Frenchman arrived in Italian football as Serie A was in the midst of a glorious peak and made an immediate impact during his debut campaign, scoring the fourth goal as the Rossoneri upset Johan Cruyff’s Barcelona ‘Dream Team‘ to win the Champions League in 1994.

Barcelona had started the final as heavy favourites, though an understrength Milan produced a brilliant final performance to win 4-0 in Athens, the biggest winning margin in Champions League final history.

Sousa was an understated presence in the last Juventus side to be crowned champions of Europe, the Italians defeating holders Ajax on penalties in Rome in 1996.

The former Portugal international formed part of a strong midfield contingent featuring Didier Deschamps and Antonio Conte, though departed in the aftermath of the Bianconeri’s success following the signing of Zinedine Zidane from Bordeaux.

Sousa signed for Bundesliga champions Borussia Dortmund that summer, where his tactical intelligence and positioning saw him play an influential role as the Germans progressed to the Champions League’s latter stages.

The midfielder spent just one season with Dortmund before returning to Italy at Inter Milan, though formed part of the side that sealed a first ever Champions League triumph, playing the entirety of the contest as former side Juventus were beaten 3-1 at the Olympiastadion in Munich.

Samuel Eto’o established himself as one of the best centre-forwards of his generation during a glittering career at the pinnacle of the game, twice winning the Champions League with Barcelona during a prolific period at the Camp Nou.

Eto’o scored in final successes over Arsenal (2006) and Manchester United (2009), though was allowed to leave Catalonia following that latter triumph and a historic treble-winning season for Barcelona under Pep Guardiola.

The Cameroon international signed for Inter Milan as part of a deal that saw Zlatan Ibrahimovic head to Spain in the opposite direction, where he starred for a Nerazzurri side seeking major honours.

Jose Mourinho’s side became the first team in Italian football history to win a continental treble, winning Serie A, the Coppa Italia and the Champions League during a record-breaking 2009/10.

Eto’o scored 16 goals in all competitions for the all-conquering Italian side, becoming the first player in history to win consecutive continental trebles with different clubs.

Alvaro Morate featured in successive finals for different clubs during the mid-2010s, his first coming in the colours of Real Madrid and in the first ever same city final against Atletico.

Carlo Ancelotti’s side had reached the Champions League final for the first time in over a decade and ended their pursuit of a 10th title and fabled La Decima with an extra-time success, Morata coming off the bench 11 minutes from the end of normal time to help his side to the trophy.

The Spain international was allowed to leave that summer in search of regular first-team football, signing for Juventus and helping his new club progress through Europe’s premier tournament.

Morata scored in both legs of the last-16 and semi-finals for the Bianconeri, the latter seeing Juventus eliminate the holders and forward’s former club Real Madrid.

Morata also netted an equaliser in the final against Barcelona, though was unable to prevent the Italians falling to a 3-1 defeat in Berlin.

Thiago Silva became the fifth player to play in consecutive Champions League finals for different clubs, with the veteran defender part of the Chelsea side crowned champions in Porto on Saturday.

Silva has been one of the best defenders of his generation during spells at AC Milan and PSG, the centre-back having been a crucial component of the latter’s recent success and quest to win a maiden Champions League title.

PSG reached the final for the first time in last season’s competition under Thomas Tuchel, though were beaten 1-0 by Bayern Munich in Lisbon as the Bavarians secured a historic treble.

Silva signed for Chelsea on a free transfer following that win and the expiry of his PSG contract, where despite pre-season doubts he has proven a shrewd acquisition with his experience and class shining through despite his advancing years.

The 36-year-old made eight appearances during the west Londoners victorious campaign, one which saw Chelsea concede just four goals on their way to being crowned champions.

His final ended on a sour note personally as he was forced off with a groin injury before half-time, though he watched on as his teammates secured success and a second Champions League triumph for Chelsea.