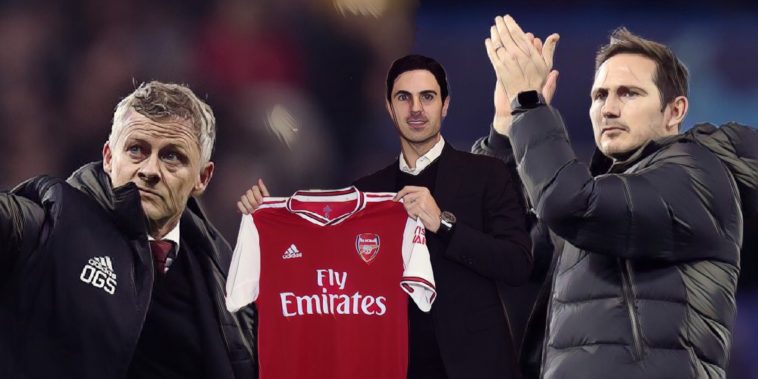 Fans become quickly excited at the prospect of a former hero returning to guide the club forward, and the romantic narrative was most recently prominent with Everton and Arsenal’s interim appointments of Duncan Ferguson and Freddie Ljungberg respectively.

Each were given the task of overseeing first-team matters until the appointments of new permanent managers, and joined a growing contingent of former favourites in the league’s dugouts.

Eddie Howe’s Bournemouth love affair continues, with the 42-year-old having spent over two decades closely associated with the Cherries as both player and manager.

Howe began his playing career at the club and make almost 300 appearances over seven seasons, before moves to Portsmouth and Swindon failed to work out and returning to the South Coast club.

The popular defender would return to the club and enjoy a further three seasons in Bournemouth colours, before injury curtailed his career and saw him move into coaching.

Howe would replace Jimmy Quinn as manager in January 2009 with the club in the fourth tier following financial troubles, guiding the club away from relegation worries despite a point deficit and then to promotion the following year.

His performances attracted the attention of Burnley, though a move to Turf Moor proved ill-fated and he returned for a second spell at Bournemouth the following year and again thrived.

He would guide the club from the third tier to the Premier League with two promotion campaigns, establishing the Cherries in the top flight where they are now into their fifth season at the highest level.

A boyhood Blades fan, Wilder is steeped in the club’s traditions and spent two spells at Bramall Lane as a player prior to his appointment as the club’s manager three years ago.

Wilder began his senior career with the Yorkshire outfit and spent six seasons at the club as a player, the former right-back enjoyed a somewhat nomadic career before returning for a second single-season spell in the 1998/99 season.

After cutting his teeth in management with the likes of Halifax Town, Oxford United and Northampton, Wilder was handed his opportunity at the club in 2016 with Sheffield United in the third tier.

Since then he has had a transformative impact, guiding the club to two promotions and into the Premier League. His innovative tactics, including overlapping centre-backs, are thriving at the highest level as the club make an impressive start to life back in the top flight.

The 52-year-old has received admiring glances, but would likely prove difficult to prise away from the club.

Jose Mourinho’s dismissal at Old Trafford saw Manchester United seek a familiar face in a bid to turn their fortunes around, bringing former forward Solskjaer back to the club from Norwegian side Molde.

After retiring from the game Solskjaer began his managerial career in his homeland, winning back-to-back titles with another of his former sides before a disappointing spell as Cardiff City boss.

The Norwegian rebuilt himself with a second spell at FK Molde before the call came from United, taking charge on a short-term basis only to see the club surge under his stewardship and earn him the position permanently.

Since his permanent appointment, it has been mixed fortunes, however, with the jury still firmly out on the 46-year-old’s managerial capabilities following an indifferent start to the season.

Chelsea sought the help of a club legend this summer following the departure of Maurizio Sarri and their FIFA-imposed transfer-ban, gambling on former midfielder Frank Lampard to take charge after just a single season in management with Derby County.

Lampard is regarded as one of the best players in the club’s history after netting a record 211 goals, winning three league titles and the Champions League amongst a host of major honours.

The Englishman has proven to be a hugely popular appointment in testing circumstances, and has begun impressively at Stamford Bridge by guiding the club into the top four and through to the Champions League knockout stages.

His integration of the club’s academy graduates has also won plaudits following the lack of opportunities handed to young talent by Chelsea in recent seasons, and despite a wobble in recent weeks, has shown promise in the early stages of his career in the dugout.

Arsenal would choose to replace one former player for another by announcing Arteta as their next permanent boss this week, the Spaniard and former club captain taking charge following the interim reign of the aforementioned Ljungberg.

The 37-year-old spent five seasons at the Emirates as a player and is highly regarded by the Gunners’ hierarchy, though his appointment is somewhat of a bold gamble given his lack of managerial experience.

Since retiring from football three years ago Arteta has worked under compatriot Pep Guardiola as part of the Manchester City backroom staff, enjoying a successful period that has delivered back-to-back titles and English football’s first domestic treble.

Arsenal will now hope that his education has been sufficient as they bid to revive their fortunes, the club’s prospects having declined in recent years and their succession plan from Arsene Wenger having failed to work out.

Arteta will be tasked with helping the club climb the Premier League table following a disappointing start to the season, whilst their Europa League campaign may also prove crucial as they bid to secure Champions League qualification after a three-year absence from Europe’s elite.

Read – Best of the 2010’s: The top Premier League coaches of the decade