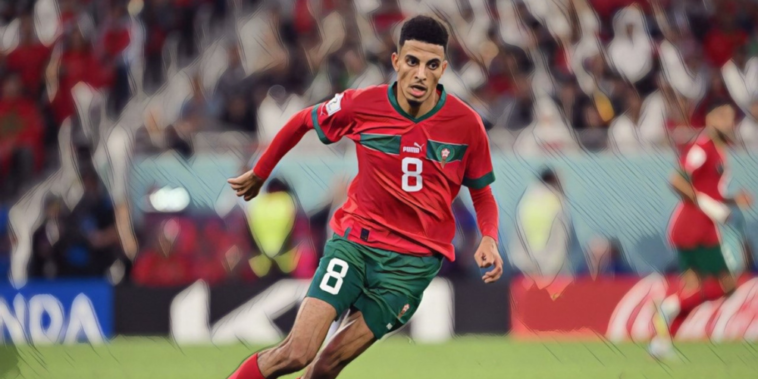 Major tournaments often produce breakthrough talents and the 2022 FIFA World Cup has been no different. A number of less heralded names have placed themselves in the consciousness of football fans with impressive performances in Qatar this winter.

Here are five players who have seen their reputations soar at the 2022 World Cup.

Just 18 months ago, Azzedine Ounahi was playing his football in France’s third tier. He travelled to the World Cup after a difficult start to the season at Angers, who sit bottom of Ligue 1, and with just a handful of previous caps for Morocco having made only his debut in January.

His role in Morocco’s history-making run to the semi-finals has increased the attention around the midfielder, who is a name on the radar of clubs across Europe’s top five leagues. Such was his impact, Luis Enrique took time to praise the 22-year-old after his role in Morocco’s upset of Spain in the Round of 16.

Azzedine Ounahi played in France’s third tier less than two years ago. He’s now at Angers, who are bottom of Ligue 1. He made his senior Morocco debut in January.

He lit up the midfield in wins vs. Belgium, Spain and Portugal.

Now the 22-year-old is in a World Cup semifinal 🤩 pic.twitter.com/PaDr63UbxH

“Madre mía, Where did this kid come from? I’m sorry, I can’t remember his name. He can really play. He surprised me.”

Ounahi kept on surprising at the finals, going toe-to-toe with illustrious opposition and often coming out on top. His football was played with the confidence and swagger of a young player who felt he belonged on this stage. After starring against Spain, he was excellent in the quarter-final win over Portugal where he covered more distance, completed more dribbles, and won more duels than any other teammate.

Caution should often be taken when signing players based on tournament performances, but Ounahi has the raw ingredients to be moulded into a top talent. Several Premier League sides are already said to be interested in the midfielder and it would come as little surprise to see Angers cash in this winter, while his stock is at its highest.

Australia’s squad lacked the top-league talent of past tournaments, but the Socceroos upset the odds to reach the knockout rounds for just the second time in their history.

Harry Souttar was the stand-out performer for Australia, with the Aberdeen-born man-mountain having a tournament to remember in Qatar. A little more than two years ago, Souttar was on loan at third tier Fleetwood Town, but saw his reputation enhance rapidly with some dominant displays at the World Cup.

Having switched his international allegiance from Scotland to Australia in 2019, he has since won 13 caps for the national side and saved his best performances for his country for Qatar. Against Tunisia in the group stage he was monstrous, finding himself in the way of threatening Tunisian attacks time and time ago with body-on-the-line defending.

Another commanding performance saw Australia upset Denmark to reach the knockout rounds, with Souttar central to another clean sheet as his 6ft 6in frame dominated in the air. That his performances came after just one game at club level this season was even more remarkable, with Souttar recently back from an ACL injury that had sidelined him for a year.

Australia manager Graham Arnold has backed the Stoke City centre-back for a move to the Premier League.

Goncalo Ramos is a name that has been on the radar of European clubs, but he announced his arrival on the world stage in stunning fashion in Qatar.

Having broken into the Benfica side last season, Ramos has taken on a leading role for Roger Schmidt’s side this season following the summer sale of Darwin Nunez to Liverpool. The top scorer in Portugal’s Primeira Liga, he earned a first call-up for Portugal ahead of the World Cup.

He scored on his debut in a pre-tournament friendly with Nigeria, but had played just 35 minutes of international football before the last-16 tie with Switzerland. Thrust into the side with Cristiano Ronaldo dropped, he replaced the nation’s record goalscorer – and then some.

Ramos hit a hat-trick and created another as Portugal thrashed Switzerland 6-1, becoming the first man in two decades to net a treble on their first World Cup start. It was the first hat-trick in a knockout round game since 1990 and made Ramos the youngest player to claim a World Cup match ball since 1962.

Who saw that coming from Goncalo Ramos!! 🇵🇹

The 21-year-old only had 35 minutes of international experience before tonight… 👀#ITVFootball | #FIFAWorldCup pic.twitter.com/gll8GEBi2d

The manner of his finishing was excellent, with his first a thunderous strike inside Yann Sommer’s near post. He got across his man to turn in Diogo Dalot’s cross for a second, before completing his hat-trick with a delicate finish over the onrushing Sommer.

Benfica have brought in some sizeable fees for their top talent in recent windows and Ramos could be the next name to earn the club a windfall.

The heartbeat of Morocco’s success story in Qatar, Sofyan Amrabat is on the radar of top clubs across Europe following his performances at the World Cup.

Amrabat was linked with a move to Tottenham last winter and there will be some in north London cursing their failure to land the midfielder, following his outstanding performances in Morocco’s run to the last four.

Amrabat has appeared everywhere on occasion in the Morocco midfield, having recovered possession 51 times during the Atlas Lions’ campaign – a record for an African player at a single World Cup.

Such has been his impact, France president Emmanuel Macron is understood to have visited Morocco’s dressing room after their semi-final defeat to the world champions, hailing Amrabat as “the best midfielder of the tournament” in front of the squad.

Tireless and tenacious in the engine room, his relentless work-ethic has turned the heads of top clubs as the January window approaches. Fiorentina will be reluctant to lose the Moroccan mid-season, but with 18 months remaining on his deal could deem a winter window sale sensible.

Perhaps no moment embodied his tournament more than his challenge on Kylian Mbappe in the last four. Hurtling back to chase one of the quickest players in the game, Amrabat produced a crunching challenge on the Frenchman to stop a threatening break and came out with the ball.

It was the sort of desire and determination that has placed him on the radar of recruitment teams.

Dominik Livakovic earned plenty of praise during Croatia’s run to the semi-finals, with the goalkeeper’s penalty shootout heroics grabbing headlines.

A less discussed, but equally important, part of Croatia’s campaign was the performances of Josip Juranović. The right-back was named in the PFA Scotland Team of the Year after an impressive debut season at Celtic last term, in which he won the Scottish Premiership.

Signed for a fee of just £2.5m from Legia Warsaw, his value has rocketed following a series of strong performances in Qatar. Barcelona and Manchester United have been linked with the defender, who was a marauding presence down the flanks for Croatia.

His performance against Brazil in the quarter-final was one of the tournament’s best individual displays from a defender, as Juranović galloped forward on the attack and locked down the threat of Vinicius Junior.

Up against one of the most dangerous wide-men in the competition, Juranović dominated their duel and Celtic are set for a significant profit should Europe’s wealthier clubs firm up their interest.