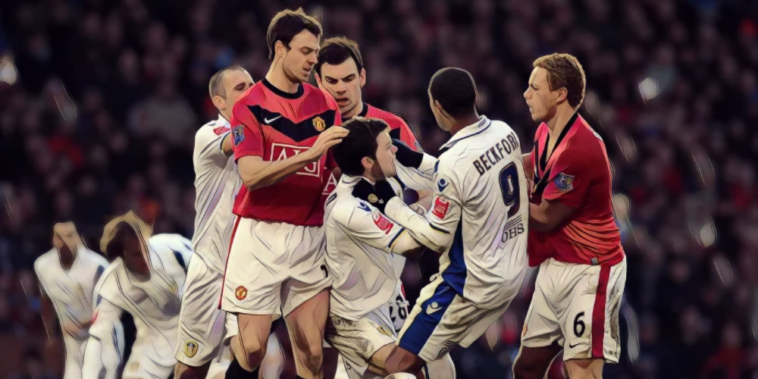 Manchester United travel to face Leeds this weekend as one of English football’s most notorious rivalries is resumed, the latter’s return to the Premier League this season having reignited the northern hostilities.

The two clubs – and cities – have a rivalry that dates back more than a century, the War of the Roses in the 15th century largely credited as laying the foundations for a bitter geographical rivalry either side of the Pennines.

The first meeting between the football clubs came in 1906 and since then there has been no shortage of classic encounters, this weekend’s clash set to be the latest instalment in a rivalry that has entertained the masses for decades.

Ahead of Sunday’s showdown at Elland Road, we look back at five of the most memorable games between Manchester United and Leeds.

Hostilities between the two teams heightened with the increase in hooliganism and successful eras of Matt Busby and Don Revie respectively, whilst two bruising replayed FA Cup semi-final encounters in 1965 and 1970 also added fuel to the fire.

The two teams met early in the 1978/79 season and there was added spice to the meeting following the club’s transfer activity, Manchester United having controversially signed Joe Jordan and Gordon McQueen from Leeds.

Jordan and McQueen were amongst Leeds’ leading assets and were unsurprisingly given a less than pleasant welcome upon their return, though McQueen silenced a raucous home crowd after scoring in an entertaining 3-2 win at Elland Road.

United twice led through McQueen’s headed opener and a Sammy McIlroy goal, but were twice pegged back as Leeds levelled through goals from Paul Gray and Frank Hart.

Leeds and Manchester United have on occasion gone head-to-head for major honours throughout the decades, including during a tight title race during the final pre-Premier League season.

Sir Alex Ferguson’s side had begun to make progress after winning the FA Cup and European Cup Winners’ Cup over the previous two campaigns, whilst Howard Wilkinson had guided Leeds impressively back into the top tier after an eight-season absence and immediately into title contention.

The two teams were drawn to face each other three times in just 18 days at Elland Road, with the Red Devils eliminating Leeds from both domestic cup competitions after a pivotal league meeting.

First met second in the title race in the first of three clashes dubbed the ‘trilogy’, with Leeds withstanding an early storm before falling behind as Neil Webb opened the scoring for the league-leading Red Devils.

Just 10 minutes from the end, however, the usually imperious Gary Pallister brought down Gary McAllister in the box, allowing Mel Sterland to slam home an equaliser from the spot.

The result ended United’s momentum having won their previous five and after losing 4-1 at home to Queens Park Rangers in their next fixture, the title race was back on.

It would be Leeds – led by former United star Gordon Strachan and bolstered by the mid-season signing of a certain Eric Cantona – who powered home to be crowned as champions by a margin of just four points, leaving Ferguson and his side waiting a little longer for a first league title since 1967.

Manchester United’s 26-year wait for a league title was ended in the Premier League’s inaugural season, with the Red Devils becoming England’s dominant force during the nineties.

Sir Alex Ferguson’s side won four of the first six titles of the Premier League era and were chasing a historic treble during the 1998/99 season, a campaign which included a thrilling 3-2 win over Leeds at Old Trafford.

David O’Leary’s mid-season appointment had raised optimism at Leeds and a host of emerging academy graduates – including Harry Kewell, Jonathan Woodgate and Alan Smith – were beginning to form the spine of a promising side.

Leeds’ youthful side went toe-to-toe with the title challengers in November 1998, with Jimmy Floyd Hasselbaink opening the scoring with a low drive beyond Peter Schmeichel against the run of play.

Ole Gunnar Solskjaer levelled the scores on the stroke of half-time, before Roy Keane’s emphatic finish put the hosts ahead just 30 seconds into the second half.

Leeds hit back and equalised through Kewell following a mistake from Wes Brown, only for Nicky Butt’s stunning strike to seal three points for the Red Devils following a breathless encounter.

Arguably the best meeting between the two rivals in the Premier League era, Leeds and Manchester United played out a seven-goal thriller during the 2001/02 season.

Leeds had been in title contention over the first-half of the season and topped the division on January 1, before a wobble following the turn of the new year saw them fall adrift of Arsenal, Liverpool, Manchester United and Newcastle.

United headed into the clash as defending champions and needing to win to keep their title hopes alive, getting off to the perfect start as Paul Scholes fired home after just eight minutes.

Leeds responded as Lee Bowyer’s driving run opened up the defence before playing in Mark Viduka, who slotted past Fabien Barthez to level the game.

United had been in fine goalscoring form heading into the clash and continued their red-hot streak, Ole Gunnar Solskjaer’s instinctive brace putting the champions 3-1 ahead at the break.

Ryan Giggs added a fourth 10 minutes into the second half after turning home David Beckham’s cross, but Leeds set up a frantic finish, Ian Harte’s stunning free-kick halving the deficit before Lee Bowyer’s header made it a nervous final few minutes for the visitors.

Having regularly contested at the top level of English football earlier in the decade, Leeds’ financial meltdown had seen the club drop from the Premier League to England’s third tier.

Little was expected then when the Whites made the short trip across the Pennines for an FA Cup third round tie in 2010, where they faced a Red Devils side who had reached back-to-back Champions League finals over the previous two campaigns.

Two divisions and forty-two league places separated the two sides ahead of the clash, but it was Leeds who progressed into the fourth round as Jermaine Beckford scored the only goal of the game to stun Old Trafford.

Following their sharp fall-from-grace, the game proved one to savour for Leeds’ fans as Beckford raced in behind Wes Brown before firing home the winner beyond Tomasz Kuszczak.

Sir Alex Ferguson’s rotated side had come undone in an upset against their fierce rivals on home soil, the first time the Scot had been eliminated in the third round as Manchester United manager and the first time he had ever lost to lower league opposition.