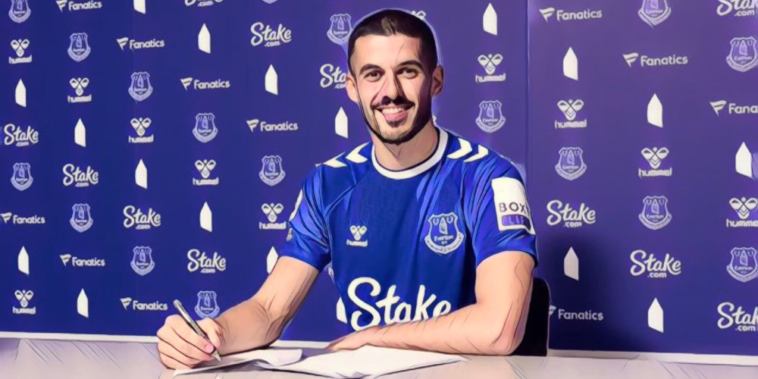 Conor Coady is set to join an exclusive group of players to have adorned the colours of both Liverpool and Everton, with the defender having joined the Toffees on a season-long loan deal.

Coady came through the academy ranks at Liverpool, but made just two senior appearances for the Reds before forging a successful career away from Anfield.

After seven seasons at Wolves, the England international has returned to his native Merseyside, though has done so in the colours of Everton.

While the path between the two rivals hasn’t been particularly well-trodden in the Premier League era, throughout the decades there has been a long list of big names to have worn both the red and blue of the Merseyside clubs.

Here are five of the best players to have played for Liverpool and Everton.

Dave Hickson was a prolific source of goals for Everton during the 1950s, with the forward having scored 109 goals across his two spells with the Toffees.

Hickson began his professional career with the club after being spotted at local amateur side Ellesmere Port Town, before making his Everton debut in 1951 and becoming a regular in the side.

He scored 25 goals in the 1953/54 season to fire Everton to promotion from Division Two, before moving on following their top-flight return to undertake spells at Aston Villa and Huddersfield Town.

'The Cannonball Kid' is still missed by all at Goodison. #EFC pic.twitter.com/PVQiF2bgrw

Hickson returned for a second spell at Everton in 1957, but caused controversy two years later after leaving the club to sign for Liverpool.

The Reds were then languishing in the second tier, but a run of goals – netting 38 in 67 appearances – soon won over his new fanbase.

His latter career included spells at Cambridge City, Bury and Tranmere Rovers, completing a Merseyside hat-trick with his short spell at Prenton Park. His 114 goals combined are the highest total recorded among players to have represented both clubs, ahead of Kevin Sheedy (99) and David Johnson (98).

Liverpool signed Kevin Sheedy as a teenager from Hereford United, but he failed to make the grade with the Reds and was handed just five senior appearances.

He was allowed to leave for Everton for just £100,000 in 1982 and proceeded to become one of the club’s greatest ever players.

That fee had been decided by tribunal and proved a bargain for the Toffees, as Sheedy spent the next decade delighting the Goodison Park crowd with match-winning moments from both dead balls and open play.

The former Republic of Ireland international scored 97 goals in 356 games for Everton, forming part of the team that won the First Division title in 1985 an 1987, with the midfielder named in the PFA Team of the Season on each occasion.

Blessed with brilliant technique and vision, he also scored in the final as Everton won the 1985 European Cup Winners’ Cup, netting the third as Rapid Vienna were beaten 3-1 in Rotterdam.

McMahon began his career in the colours of Everton, having graduated from a ball-boy at Goodison Park to become the captain of the club’s senior side.

The midfielder broke into the team during the 1980/81 season and ended his debut campaign named as the Supporters’ Player of the Year, before inheriting the captan’s armband as his influence began to grow.

After 119 games and 14 goals for Everton he signed for Aston Villa in 1983, but returned to Merseyside two seasons later to become Kenny Dalglsh’s first signing as Liverpool manager.

On this day in 1985 Liverpool signed Steve McMahon from Aston Villa.
A good excuse to all watch this classic Liverpool goal. This team were relentless pic.twitter.com/gOWzuwL4Of

His first goal came in a derby win over former side Everton, as the combative midfielder soon became a key figure in the Reds’ engine room.

McMahon’s best football came in the colours of Liverpool as he mixed a fearsome reputation with a series of spectacular strikes, netting 50 goals in 277 appearances for the club.

He won three First Division titles and two FA Cups across six-and-a-half seasons at Anfield, before departing to sign for Manchester City in December 1991.

Kenny Dalglish broke the British transfer record to take Peter Beardsley to Liverpool in 1987, as he added the Newcastle forward to his attacking options.

Beardsley joined in the same summer as John Barnes, and the pair would form a formidable frontline alongside John Aldridge.

The trio combined for 64 goals in all competitions as Liverpool were crowned champions in 1987/88, with Beardsley proving the perfect foil for Aldridge with his fleet-footed movement and evasive dribbling.

An absolute scoundrel of a goal from Peter Beardsley this week in 1989.

First there’s the instant control of a ball dropping from the outer limits of Earth’s atmosphere.

Then the needless nutmeg of Colin Hendry.

And finally, a clinical finish.pic.twitter.com/ceYaSgZymQ

He added the FA Cup and a second league title across his four seasons at Anfield, in which he scored 59 goals in 175 appearances.

Beardsley signed for Everton in a £1m deal in 1991 and scored 32 goals in 95 games for the Toffees, becoming just the second player to have scored in Merseyside Derbies for both clubs. After two seasons at Everton he returned to Newcastle for a second spell at St James’ Park.

Nick Barmby became the first player to move directly from Everton to Liverpool in more than four decades after crossing the Merseyside divide in 2000.

Barmby had impressed across four seasons at Everton, in which the midfielder scored 24 goals in 121 games across all competitions. However, the Toffees struggled near the bottom of the Premier League for much of Barmby’s time with the club and Everton accepted a £6m bid from their cross-town rivals.

The England international’s time with Liverpool proved to be short-lived, but he scored eight goals in all competitions as the Reds won a UEFA Cup, FA Cup and League Cup treble under Gerard Houllier in 2000/01, including the opener in a 3-1 win over Everton and a goal in a 4-0 thrashing of Arsenal at Anfield.

After just 58 appearances for the Reds, he signed for Leeds in a £2.75 million deal.