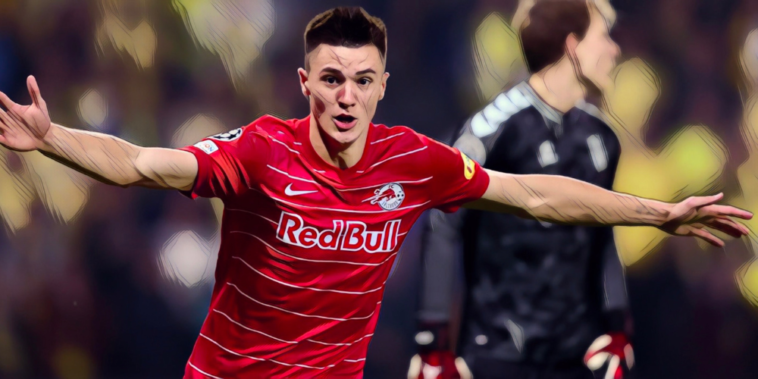 RB Leipzig have confirmed the signing of Benjamin Sesko from Red Bull Salzburg, with the Bundesliga side having beaten off strong interest to sign the forward.

Sesko has been on the radar of a number of Premier League clubs with Manchester United, Chelsea and Liverpool all credited with an interest in a deal, but Leipzig have now reached an agreement to sign the Slovenian from sister club Salzburg.

The 19-year-old scored 11 goals last season as Salzburg won a domestic double in Austria and shone during a pre-season win over Liverpool last month, scoring the only goal in a 1-0 win over the Reds.

Leipzig have confirmed the deal on the club’s official website, an agreement that will see Sesko remain with Salzburg for the 2022/23 campaign, before moving to Germany on a five-year contract in July 2023.

The teenager has already won 13 caps for Slovenia at international level, scoring two goals for the national side.

Leipzig are also expected to announce the re-signing of Timo Werner from Chelsea in the coming days having agreed a permanent deal to bring the Germany international back to the club.

Werner scored a club-record 95 goals across four seasons at the Red Bull Arena, but has failed to replicate that form since making a £47.5m move to the Premier League in 2020.