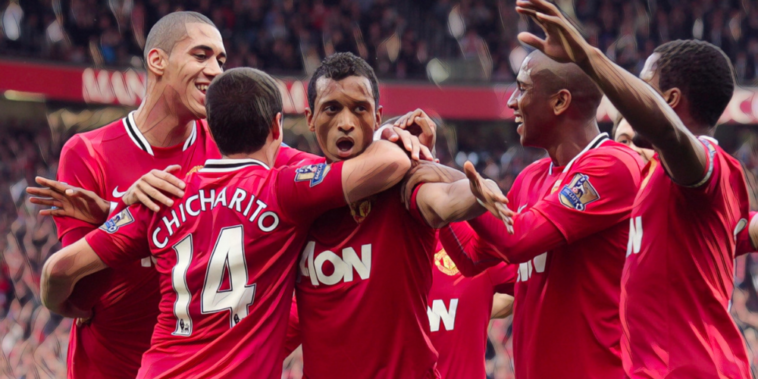 Manchester United face Chelsea in the Premier League this evening in the latest encounter between two teams who have been regular rivals since the turn of the century.

Tonight’s meeting at Old Trafford might not have quite the same importance as past clashes, but it no doubt evokes nostalgia of memorable meetings between the two in the Premier League era.

Ahead of their showdown, we’ve decided to look back at five of the most memorable goals scored in Premier League clashes between Manchester United and Chelsea.

The Dutch dangerman forged a reputation for fearsome blasts of a football across his Premier League career, one which included winning two Golden Boots and score 127 goals in England’s top division.

Chelsea had signed Hasselbaink in a Premier League record £15m deal from Atletico Madrid and he wasted little time in getting up and running at Stamford Bridge, scoring 23 league goals to finish as the league’s leading scorer in his debut 2000/01 campaign.

Among his finest came this thunderous strike in a thrilling 3-3 draw at Old Trafford, as the summer signing thumped the visitors ahead inside eight minutes.

Hasselbaink cushioned Tore Andre Flo’s looped cross on his chest before unleashing a breathtaking blast on the half-volley to stun the champions.

Diego Forlan endured a testing time at Manchester United, with the forward failing to find the form that saw him become one of Europe’s leading goalscorers upon leaving Old Trafford.

Forlan’s match-winning double against Liverpool and heart-on-sleeve style ensured him cult status, whilst he played in his part in the Red Devils’ 2002/03 title success.

His 90th-minute winner against Chelsea secured a precious three points for Sir Alex Ferguson’s side, as the Uruguayan – who had scored a League Cup winner against the Blues the previous month – lashed home a fine finish from Juan Sebastien Veron’s clipped pass.

It didn’t quite work out for Forlan in England, but this was an example of the finishing that saw him win two European Golden Boots during a goal-laden spell in Spain.

Chelsea emerged as the Premier League’s dominant force following Roman Abramovich’s arrival as manager and in 2004/05 secured their first league title in 50 years.

Jose Mourinho’s team were already confirmed as champions when arriving at Old Trafford for the penultimate game of the campaign and produced a performance that underlined their status as England’s finest.

Ruud van Nistelrooy had opened the scoring for the Red Devils, but this thwack Tiago goal levelled the scores as Chelsea came from behind to seal a 3-1 win at the Theatre of Dreams.

Chelsea made it back-to-back league titles the following season with a win over nearest challengers Manchester United clinching the championship at Stamford Bridge.

Mourinho’s team were in fine form on a sun-soaked afternoon in West London, opening the scoring inside five minutes through William Gallas.

Joe Cole then produced an outrageous piece of skills to double the home side’s lead, bamboozling England teammate Rio Ferdinand with quick feet and close control to burst away from three defenders and fire home a finish.

90s Ballers: Joe Cole, the cheeky magician who showed us glimpses of greatness

Nani could be frustrating and brilliant in equal measure at Manchester United, but when he got it right there was often spectacular consequences at Old Trafford.

The Portuguese winger compiled quite the catalogue of stunning goals in English football, including this stunning drive against Chelsea.

Nani skipped away from challenges from Juan Mata and Raul Meireles, before unleashing a rising drive into the far top corner.

The goal helped the Red Devils to a win that moved them three points clear at the top of the Premier League, after a 3-1 win that included an astonishing miss from Chelsea’s Fernando Torres.