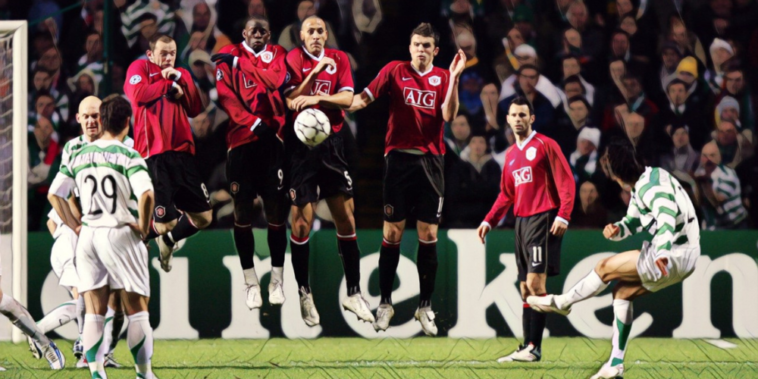 Liverpool take on Rangers in the Champions League this evening, as the two teams prepare for a Battle of Britain clash at Ibrox.

The meeting between the teams on Merseyside last week was remarkably the first competitive encounter between the clubs, but there have been plenty of memorable England vs Scotland clashes in European football throughout the years.

Five of the best games between English and Scottish clubs in Europe.

Celtic had edged a hard-fought contest during the first meeting at Celtic Park as a Bobby Lennox goal provided the Scottish side with a narrow advantage to protect at Anfield.

In need of two goals to progress, Liverpool found their form in the return to reach the final. Tommy Smith scored the leveller with a free-kick just after the hour, before Geoff Strong’s second moments later booked a final date with Borussia Dortmund – staged in Glasgow at Hampden Park.

The Reds were beaten 2-1 after extra-time, but their win over Celtic was an impressive achievement. Celtic completed a stunning quintuple the following season to win five trophies, including becoming the first ever British team to win the European Cup as the club’s Lisbon Lions beat Inter Milan.

The champions of Scotland and England went head-to-head in the semi-finals of the European Cup during the 1968/69 season, as Celtic took on Leeds over two legs.

Celtic had scored a first-minute goal at Elland Road to secure a 1-0 first-leg win, but saw Billy Bremner level the tie at Hampden Park. Over 136,000 fans packed inside the national stadium for the return and roared Celtic on to a second European Cup final in three seasons.

John Hughes and Bobby Murdoch scored to turn the game around and send Celtic through, though the Bhoys were beaten in the final as Feyenoord were crowned European champions.

Leeds entered the first season of the rebranded Champions League as the champions of England, having won the title under Howard Wilkinson the previous season.

Leeds took on Rangers in a play-off to reach the group stages and were beaten in both legs. Gary McAllister had handed the visitors the lead inside two minutes at Ibrox, but a John Lukic own goal levelled the scores before Ally McCoist netted a crucial winner.

🎯 The cross from Hateley
💥 The header from McCoist

⏪ On This Day In 1992 #RangersFC recorded a famous @ChampionsLeague win over Leeds United at Elland Road. pic.twitter.com/DhkLpTUYIx

Rangers then produced a strong showing to secure a memorable win at Elland Road. McCoist scored again in the return after meeting Mark Hately’s cross, as Rangers progressed 4-2 on aggregate. Eric Cantona scored Leeds’ late consolation goal, his final goal for the club before a move to Manchester United.

Walter Smith’s Rangers side narrowly missed out on a place in the Champions League final after a runners-up finish to Marseille in the group stage. The winners of the two-group tournament faced off in the final at that time, with Marseille beating AC Milan 1-0 in Munich.

Celtic reached the knockout rounds of the Champions League for the first time after a memorable 1-0 win over Manchester United in Glasgow.

Shunsuke Nakamura’s spectacular free-kick nine minutes from time secured a crucial Celtic win, while the Scottish side had Artur Boruc to thank after the goalkeeper saved a penalty from Louis Saha.

Nakamura had scored a brilliant free-kick as Celtic lost 3-2 at Old Trafford earlier in the campaign, before demonstrating his excellence from a dead-ball once again at Celtic Park.

It was a goal that sent the home crowd into raptures and remains one of Celtic’s most iconic scored in the Champions League era.

Celtic and Manchester City played out an enthralling encounter during the 2016/17 champions League group stages, as the two teams exchanged six goals in Glasgow.

Celtic dominated the opening exchanges and twice led in the first half through Moussa Dembele and a Raheem Sterling own goal, but Fernandinho and Sterling issued responses for the visitors who headed into half-time level.

Dembele netted his second goal of the evening on the turn to restore Celtic’s advantage for a third time, only for Nolito to net a leveller for City at an atmospheric Celtic Park.

The draw ended Pep Guardiola’s perfect record in charge of City, having taken over at the Etihad during the summer.