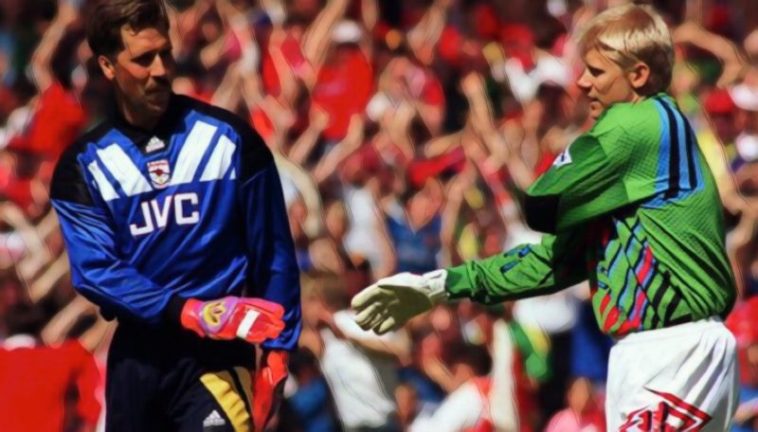 There can be no disputing the importance of a great goalkeeper to any side and throughout the Premier League years we’ve seen some sensational shot-stoppers in England’s top tier, a series of commanding figures acting as the last line of defence.

Goalkeeper’s remain a unique and perhaps under-appreciated part of football, less revered than their attacking counterparts yet unable to make any mistake for the most part without costly consequences.

We’ve decided to revisit some of the very best numbers ones from the early years of the Premier League, a look back at a decade that saw the birth of the rebranded division as English football relaunched in spectacular style.

Here are five of the best 90’s Premier League goalkeepers:

The last goalkeeper to be named as the FWA Footballer of the Year, Southall’s peak as arguably the world’s best came during the eighties, though he remained one of the league’s finest during the early nineties and initial seasons of the Premier League era. Despite his portly build, Southall was renowned for his agility and reflexes, which allowed him to pull off all manner of remarkable saves.

The former Wales international played a key role in Everton’s successes of the decade despite the club’s fortunes having largely declined, conceding just one goal throughout the tournament as the Merseyside club won the FA Cup in 1995 – the Toffees’ last major honour.

That victory made Southall the most decorated player in Everton history and he remains the club’s all-time record appearance holder, representing the club on 750 occasions throughout an 18-year stay at Goodison Park and keeping a huge 269 clean sheets.

Amongst a host of big-money signings by Blackburn during the early seasons of the Premier League, the £2.4m arrival of Flowers from Southampton made the shot-stopper the most expensive goalkeeper in the history of English football in 1993.

The move would prove an inspired one, however, as Flowers established himself as one of the Premier League’s best during a six-year spell at Ewood Park, being named in the PFA Team of the Year in consecutive seasons during his first two campaigns at the club.

The latter of those seasons saw Blackburn win a first league title in 81 years under Kenny Dalglish, Flowers recognised by his fellow peers as the best goalkeeper in the Premier League as the Lancashire side pipped Manchester United by just a single point.

He later had a four-year spell with Leicester City and won 11 senior caps for England.

Martyn became the first goalkeeper to cost £1m when moving to Selhurst Park from Bristol Rovers in 1989, impressing during seven seasons with the club to earn a move to Leeds in the mid-nineties.

The goalkeeper proved a hugely influential player during an exciting period for the Yorkshire side, being named in the PFA Team of the Year in consecutive seasons in 1997/98 and 1998/99, before forming part of the side which reached the semi-finals of both the UEFA Cup and Champions League under David O’Leary.

A superb shot-stopper, he was voted in Crystal Palace’s Centenary XI and Leeds’ greatest ever XI, Martyn was a popular figure at both clubs and kept 137 clean sheets in 372 Premier League appearances.

Martyn retired in 2006 after winding down his career at Goodison Park, and much like Flowers was unlucky to spend the majority of his 23 cap international career as back up to the next man on our list…

The leading shot-stopper amongst a host of talented English goalkeepers throughout the nineties, Seaman established himself as the nation’s number one and earned 75 caps for the Three Lions, playing a starring role during their run to the semi-finals of a home European Championships in 1996.

At club level, ”Old Safe Hands,” was the reliable last line of a famed Arsenal defence under the guidance of George Graham, forming part of the side which won the league title in 1991 before a succession of cup successes in the early nineties, including becoming the first club in history to win a domestic cup double.

Seaman spent over a decade as the Gunners’ first choice and thrived further following the arrival of Arsene Wenger in north London, winning two domestic doubles under the Frenchman during a golden period either side of the millennium.

An authoritative presence for much of his 564 appearances in an Arsenal shirt, he has the fourth-highest amount of clean sheets in Premier League history.

Regarded by many as the greatest goalkeeper in the history of the Premier League, Peter Schmeichel was amongst the select few foreign players on the opening weekend of the division’s inaugural season before playing a hugely influential role in Manchester United‘s early successes.

A monstrous presence, who struck the fear of god into opposition strikers, Schmeichel helped United end their 26-year wait for a league title during the first season of the Premier League, before playing a key role as Sir Alex Ferguson’s side made it back-to-back titles as part of a domestic double the following season.

The Dane became the first – and so far only – goalkeeper to be named as Premier League Player of the Season after United secured a second domestic double in 1995/96, before the crowning moment of his Old Trafford career with a famed treble-winning season three years later, Schmeichel captaining the side to Champions League success in the absence of the suspended Roy Keane.

Schmeichel made 398 appearances in all competitions for the Red Devils and won five league titles amongst his list of major honours, later having spells at both Aston Villa and Manchester City, becoming the first goalkeeper in Premier League history to score a goal for the former against Everton in 2001.

Read – Remembering every 90’s PFA Young Player of the Year

Read Also – Teams that should have won the Champions League: Late 90’s Juventus