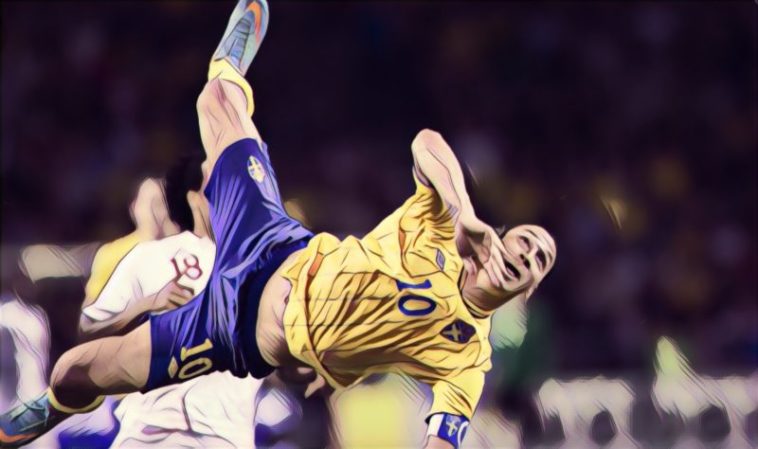 There are few more spectacular sights in football than the overhead kick, a show of athleticism, timing and technique to score a truly glorious goal.

Everaldo became a social media storm this week after scoring a sensational overhead effort, with the forward’s last-minute equaliser for J-League side Kashima Antlers a goal that will no doubt be replayed time and time again.

Everaldo has just done THIS in the 89th minute to equalise for Kashima Antlers in the @J_League_En.pic.twitter.com/0xU6eZGF9H

The Brazilian’s spectacular strike had us racking our brains for our favourite overhead kicks of all time and it was a tough challenge to whittle down this list of wondergoals to a favourite five.

In tribute to the outrageous audacity required, here are five of our favourite ever overhead kicks.

Trevor Sinclair’s astonishing acrobatics earn his inclusion in this fantastic five, with the former England international turning an aimless cross into an unforgettable goal in 1997.

Hooked in high towards the edge of the penalty area, there appeared little danger as Sinclair awaited the dropping ball with his back to goal.

One ridiculous jump and an impossibly sweet connection later, Sinclair had scored one of the FA Cup’s greatest ever goals.

Trevor Sinclair with one of the greatest ever FA Cup goals and the overhead kick that all other overhead kicks will be judged against forever more. 🔥 pic.twitter.com/1I4JxklMde

No matter how many times we rewatch this goal it still makes little sense.

Just why did Mauro Bressan hit that?

And how did it end up going in?

The Fiorentina midfielder tried something truly out of the ordinary during a Champions League clash with Barcelona. With the ball hanging in the air some 25 yards out, he contorted his body position and launched himself into the air.

The consequence was a looping effort from distance that satisfyingly crashed in off the crossbar, with the added impact of bewildered goalkeeper Francesc Arnau ending in the net only increasing the aesthetic.

Rivaldo’s finest footballer saw him shine as the leading light of an average Barcelona team, a footballer capable of pulling the proverbial rabbit from the hat for his side.

The Brazilian’s magical best was never more evident than a winner-takes-all showdown with Valencia during the 2000/01 season.

Barca needed to win to qualify for the Champions League, while a draw or defeat meant that their opponents would qualify in their place.

An enthralling encounter saw Rivaldo take centre stage, scoring an incredible hat-trick with each goal straight from the top drawer.

His third of the evening, an 87th-minute winner, was the best of the lot, as he cushioned Frank de Boer’s floated pass on his chest before executing a sensational overhead kick from the edge of the area.

Cue pandemonium inside the Camp Nou.

Iconic Performances: Rivaldo and the greatest hat-trick ever scored

Phillipe Mexes was far from a conventional defender. Talented and temperamental in equal measure, he was a fine – if a little unpredictable – presence across a long career in Italian football.

That unpredictability also led to some unforgettable moments from Mexes however, who chose to ignore common conventions regarding centre-backs and bring a sprinkle of spectacular to the game.

His first goal for AC Milan was one the Rossoneri are unlikely to ever forgot, as the former France international did this in a Champions League group stage clash with Anderlecht.

Will we ever tire of seeing this Philippe Mexès overhead kick?

Audacious and outrageous, but no fluke from the Frenchman. Three years later he flung himself through the air once again to score this stunner in a pre-season friendly with Inter Milan.

Goal of the Year?

This outrageous goal was scored by Philippe Mexes in pre-season against Inter.

Zlatan Ibrahimovic had a point to prove to the English media.

Despite a wealth of success at some of Europe’s biggest clubs, there was a sense from the English that the super-confident and self-approving Swede was little more than an egotistical enigma.

England travelled to face Sweden in a friendly to celebrate the opening of the Friends Arena Stadium in Stockholm in 2012, an evening in which Zlatan stole the show.

He scored four goals in a thrilling 4-2 win for the home side, with his fourth of the evening a truly unforgettable moment.

#OnThisDay in 2012, Zlatan Ibrahimovic did something which, let's face it, only he can do. That thirty-odd yard overhead kick against England. Sizzled Joe Hart's brain in his head like it was a fried egg. Sensational. pic.twitter.com/Wj7vmmBB8n

In stoppage time, a long ball forward had Ibrahimovic in pursuit, though the Swede was second in the race as goalkeeper Joe Hart vacated his box to head the ball clear.

Hart’s header was poor however, providing Ibrahimovic – already the first player to score a hat-trick against England since Marco van Basten in 1988 – with an opportunity.

The forward flung himself acrobatically into the air, connecting perfectly with the dropping ball to send a 40-yard overhead kick arcing over the stranded Hart and into the gaping goal.

It was a moment of absurdity from Ibrahimovic and a goal that helped turn doubters into believers.