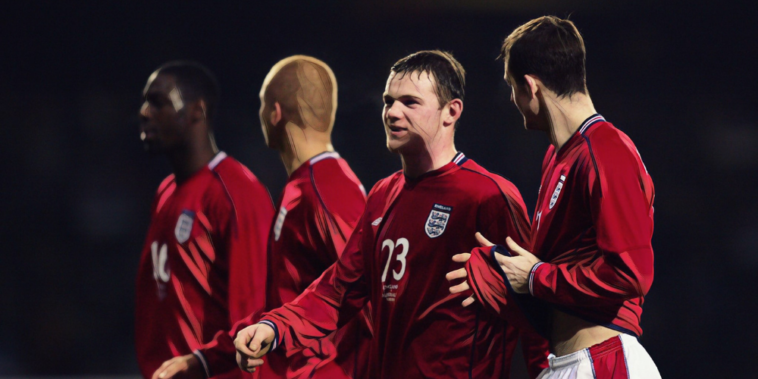 Wayne Rooney made his first appearance for England during a friendly defeat to Australia in 2003, becoming the Three Lions’ youngest debutant when coming on as a substitute in the February friendly at Upton Park.

A senior England side had found themselves two goals down at the interval to their unfancied visitors, before Rooney formed part of an entire new XI that salvaged some respect in an eventual 3-1 defeat.

Having emerged as Everton’s teenage sensation, the 17-year-old made his first appearance against Australia before going on to eclipse Sir Bobby Charlton and become the national side’s all-time record goalscorer.

We’ve decided to look back at the second half team introduced by Sven-Göran Eriksson, here is the England XI from Wayne Rooney’s international debut.

Robinson joined Rooney in making his England debut against Australia after the goalkeeper was introduced at half-time in place of David James.

Robinson had impressed after coming through the ranks at Leeds and eventually succeeded James as the Three Lions’ number one under Eriksson, forming part of the side that reached the quarter-finals of the 2006 World Cup.

He won 41 caps across his international career, but lost his place after a drop in form during England’s unsuccessful bid to reach Euro 2008. His club career saw Robinson enjoy Premier League spells at Leeds, Tottenham, Blackburn and Burnley.

Mills was an established member of the England set-up, having deputised for Gary Neville at international level.

The right-back was first-choice in Neville’s absence through injury at the 2002 World Cup in Japan and South Korea, playing every minute of England’s five fixtures at the tournament.

He had earlier formed part of the Leeds team that reached the semi-finals of the Champions League in 2001, before later spells with Middlesbrough and Manchester City.

Mills fell out of favour with England in the build-up to Euro 2004, earning the last of his 19 caps during a 1-1 draw with Portugal in February 2004.

Brown made his England debut in the late nineties after breaking into the Manchester United side, making 21 appearances in all competitions during the Red Devils’ treble-winning season in 1998/99.

He was selected for the England squad for the 2002 World Cup, but failed to make an appearance at the tournament and was largely a back-up option during an international career that saw him earn 23 caps.

The defender made 362 appearances for United and won five league titles and two Champions League trophies among his honours, before spells at Sunderland, Blackburn and Kerala Blasters before retirement.

Ledley King’s career was one ravaged with injuries, with the centre-back a player whose ability should have won far more than his 21 caps for England.

He made his debut in 2002 and came on as a half-time substitute for Sol Campbell against Australia, whilst he made two appearances at Euro 2004 and even featured in a holding midfield role on occasion.

King’s club career was spent entirely at Tottenham, where he made 323 appearances and captained the North Londoners to League Cup success in 2008.

Sadly, his chronic knee issues prevented King from seeing how far he could truly go.

Paul Konchesky earned just two caps for England at senior level, the first of which came against Australia with the left-back one of several debutants.

Having broken into the Charlton side as a teenager, he had spells with Tottenham, West Ham and Fulham before an unhappy short spell at Liverpool under Roy Hodgson.

Konchesky’s second cap did not come until more than two years later, during a 3-2 friendly win over Argentina in November 2005. He largely failed to get a look in given the presence of Ashley Cole and Wayne Bridge as England’s established left-backs.

Jermaine Jenas was named as the PFA Young Player of the Year during the 2002/03 season, having impressed since becoming the second most expensive teenager in the division’s history when leaving Nottingham Forest for Newcastle.

The midfielder was handed his England debut during the defeat to Australia, assisting the Three Lions’ goal in an eventual 3-1 loss to the Socceroos.

Despite a long career at Premier League level, he earned just 21 caps for England given competition from the likes of Steven Gerrard and Frank Lampard for a midfield berth.

Danny Murphy became a cult figure at Liverpool during the early 2000s, the midfielder’s creativity – and treble of winning goals in games against Manchester United – making him a fans’ favourite in Gerard Houllier’s team.

He won just nine caps for England, however, suffering the same fate as Jenas as the duo competed alongside some of the finest midfielders of their generation for a regular role.

He scored his only goal for England in a friendly win over Paraguay ahead of the 2002 World Cup but missed the tournament after sustaining a metatarsal injury, having initially been called up as a replacement for injured club teammate Steven Gerrard.

Owen Hargreaves holds the distinction of being the first Three Lions debutant never to have lived in England, having been born in Canada before beginning his footballing venture in Germany.

The midfielder won the Champions League with Bayern Munich in 2001 and made his England debut that same year, before being included in the squad for three consecutive major tournaments.

Hargreaves was arguably England’s stand-out player during their run to the quarter-finals of the 2006 World Cup, before moving to Manchester United the following summer and winning a second Champions League winners’ medal with the Red Devils.

The midfielder – who earned 42 caps for England – failed to build on an impressive debut season, however, as consistent injuries wrecked his latter career.

Darius Vassell enjoyed an explosive start to his England career after marking his debut with a spectacular overhead kick against the Netherlands, though it would be the first of just six goals for the Three Lions.

Vassell often found himself on the fringes of the squad during the early 2000s, earning inclusion in the squads for the 2002 World Cup and Euro 2004.

Fucking hell, 17 years since Darius Vassell did this for @England on his debut.pic.twitter.com/7jFkouHg8W

His 22nd and final appearance for the national side came in the Euro 2004 quarter-final defeat to Portugal, in which Vassell missed a crucial penalty as England were eliminated on spot-kicks,

Francis Jeffers was another Scouse striker making headlines in the Premier League, the forward having enjoyed an exciting emergence at Everton before signing for Arsenal.

Jeffers also equalled Alan Shearer’s record for most goals scored for the u21 side, having netted 13 goals in just 16 appearances.

He earned his sole England cap during his time with the Gunners, scoring the Three Lions’ consolation goal in the defeat to Australia.

It was not enough to earn a recall, however, and Jeffers’ fortunes declined as he struggled for regular first-team football in North London.

He returned to Everton on loan before signing for Charlton, but failed to live up to his early promise during a nomadic career that took in spells at clubs including Rangers, Sheffield Wednesday and Australia’s Newcastle Jets.

The headlines centred around Rooney’s debut despite the nature of England’s embarrassing defeat, as the 17-year-old teenage sensation became the Three Lions’ then youngest debutant.

He became the nation’s youngest goalscorer when netting against Macedonia in a Euro 2004 qualifying fixture (later eclipsed by Theo Walcott), before starring during the finals of that tournament with an explosive four-goal haul to be named in the Team of the Tournament.

He is also England’s most capped outfield footballer with 120 appearances, the last of which came in November 2018 as part of a one-game comeback to promote The Wayne Rooney Foundation.